A Tale of Two Canals

For over a century the Panama Canal has served effectively as a windpipe of the global economy, but it has also been seen as a tangible testament to U.S. technological and organizational prowess, the ability to mobilize capital, and a symbol of geopolitical influence in the Western Hemisphere. The Canal has played an outsized role in reinforcing the narrative taught to generations of American students, of a nation coming of age in the 20th century and bursting onto the global scene. It is a physical asset of such strategic value that the United States went to war in 1989 to protect it, and a treaty right that the United States maintains in perpetuity as a means to guarantee the universal freedom of Canal navigation. The history of U.S. engagement in Latin America, and indeed in global commerce, is intricately intertwined with the Panama Canal, and the United States and Panama have often claimed a “special relationship” as a result. 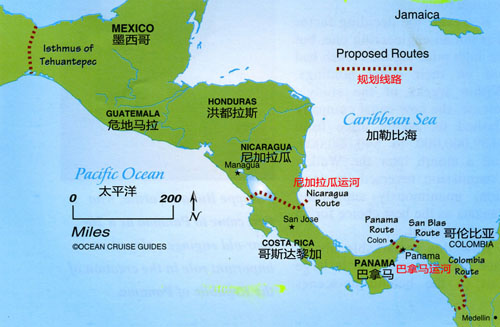 It’s perhaps no surprise, then, that China’s emergence in the Western Hemisphere, over a decade in the making, has now been announced with a new, private sector-led megaproject, the Grand Nicaragua Canal, which project planners claim will be completed by 2019. Conceptually, the project includes an interoceanic canal, an oil pipeline, a “dry canal” freight rail, two deep-water ports, two international airports, and a series of free trade zones along the canal route. Costs are projected to be in the $40-50 billion range.

The project is hugely symbolic, and comparisons with Panama are inevitable. One hundred years after the United States put its stamp on the region by physically altering the geographical landscape, China, through a private investment partnership, has announced its intention to do the same. If the Nicaragua canal comes to fruition, it will compete on economic terms directly with its neighbor further south. It would also come with a broader strategic overlay that would plant the Chinese flag in a region that has traditionally been of significant U.S. political and economic interest.

But that is, perhaps, where comparisons end. The Panama Canal has been in operation since 1914, and a third set of locks, under construction since 2007 and designed to increase capacity dramatically (allowing passage of vessels carrying up to 14000 TEUs compared to 5000 TEUs today), will open on June 26, 2016. The new canal in Nicaragua has yet to begin construction in any appreciable manner, and speculation is growing that in fact it may never move ahead.

The challenges for a canal in Nicaragua are significant, and have only become even more complicated in the years since a canal was first considered—and rejected—before a path bisecting Panama was eventually chosen. It is unclear whether traffic projections justify the need for another canal across the Central American isthmus. The vision is to throughput the world’s largest cargo ships, increasing efficiencies and lowering costs of bulk cargo from the Atlantic coast of South America to Asia. A second canal would allow for an increase in traffic from Brazil, Argentina, and Venezuela, primarily, to China. But a secular fall in commodities markets and over-capacity in China are calling into question such optimistic market projections and the need for even greater throughput capacity across Central America. World trade growth has slowed substantially and shipping companies already have excess hull capacity. There is no current need, nor rush, to construct super container ships of the sort a canal across Nicaragua would be designed to accommodate. Without business to justify the second canal, a beggar-thy-neighbor competition could develop, thus making more difficult the amortization of the massive debt that the operators would necessarily accumulate in order to construct the canal to begin with. There are also legitimate questions as to Nicaragua’s economic absorptive capacity.

As of now, the cost projections to complete the project appear to be wildly optimistic, based on unrealistic calculations for the rate of excavation, land acquisition, environmental remediation, and general and administrative expenses, to say nothing of potential cost escalation and overruns. Rather than the $40-50 billion projections publicly released by Nicaraguan officials, unofficial estimates put the true cost at around $90 billion, essentially double the preliminary estimates. This becomes even more problematic because the Chinese company behind the project, HKND, has no particular experience with massive infrastructure projects. At the same time, China’s broader slowdown has dramatically reduced the personal fortune of HKND’s leader Wang Jing, who may lack the financial muscle to launch the enterprise in any event. Whether or not these concerns turn out to be determinative, enough questions are circulating around the project at this point that the ability to raise capital against it will likely be constrained.

At the same time, environmental issues are paramount. The proposed route of the canal would be through Lake Nicaragua, Managua’s primary source of fresh water, which dredging would compromise. The path follows rivers which, when I visited in March, were nothing more than a trickle after several years of drought. Canals cannot function without water, which is already a growing concern across the isthmus. Infrastructure would need to be built literally from the ground up, as pre-existing globally-capable port facilities simply do not exist. And, of course, the steps that would need to be taken to address the seismic events that ultimately caused planners to abandon Nicaragua the first time have yet to be engineered.

That leaves one primary potential purpose for promoting a canal in the short term: politics. Nicaragua’s presidential election is scheduled for November 6, 2016, and the government is taking no chances. Proposing a massive canal in the run up to the vote offers the prospect for significant economic growth, investment, and job creation. It’s a romantic vision, and one that gives the government the opportunity to develop a narrative of good economic times to come. From the Asian perspective, it also provides a compelling new storyline to China’s emergence in Latin America, although the reputational risk of failure is high. That may be one reason why HKND is leading the canal effort rather than the government in Beijing.

For the moment, however, all eyes will be on Panama as the new locks open in June. Then, the international community will see whether traffic and revenue projections for Panama are realistic, and whether there is room for another trans-isthmian canal. Meanwhile, in Nicaragua, excavation has yet to begin.