Rise of RMB as an International Reserve Currency

On March 23rd, 2009, deep in the trough of the Global Financial Crisis and barely five days removed from the U.S. Federal Reserve’s announcement of intended purchase of a first tranche of Treasury securities as part of its ‘quantitative easing’ program, the People’s Bank of China (PBoC) Governor Zhou Xiaochuan laid out a cautiously-crafted yet sweeping proposal for the overhaul of the international monetary system. The center-piece of the proposal was the creation of a new international reserve currency which was to be disconnected from individual nations – and thus from their credit-based national currencies (although he was careful not to reference the dollar). This super-sovereign reserve currency would instead be issued in accordance with predictable rules that were multilaterally agreed upon and would remain stable in value. 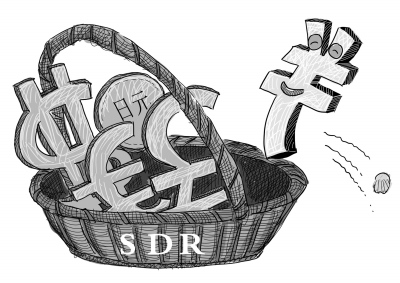 There were no illusions that the path ahead was a steep one. As a first step, Governor Zhou suggested the use of the International Monetary Fund’s Special Drawing Right (SDR) be enhanced as a reserve asset and that it be made usable as an invoicing and settlement currency for international trade and financial transactions. In time, the SDR could be elevated from its present unit-of-account configuration to one that was backed by real assets, such as a reserve pool. The proposal was motivated in no small part by the People’s Bank’s apprehension of large capital losses on, and lack of available alternatives to, its towering dollar-denominated reserve holdings as a consequence of the potential macroeconomic and exchange rate instability engendered by the Obama Administration’s crisis-induced, extraordinary policy response.

The proposal was greeted politely; it was left to wither thereafter on the vine.

Determined to transcend his reserve management predicament as well as contribute China’s emergent influence to a more diversified, more liquid and less volatile international monetary system, Governor Zhou chose the next best available option: to internationalize the renminbi by making it usable as an invoicing and settlement currency for international trade and financial transactions. In time, as graduated steps towards internationalization served as veritable stepping stones to cross the perilous river of capital account liberalization, a fully convertible renminbi, it was anticipated, would assume its appointed role as a select reserve currency within the global monetary order. A more fruitful conversation about a super-sovereign reserve currency that was anchored to a stable benchmark and issued according to a clear set of rules could be had at that time. Along the way, China’s exchange rate risks too would be reduced, trade transaction costs shrunk, financial markets deepened, and need to hold dollars as a medium of exchange and store of value diminished.

Starting with a pilot scheme four months later to settle cross-border trade between the Mainland and Hong Kong in RMB, a three-stage march to currency internationalization and global financial integration was embarked upon. In the first stage, the renminbi was to be tested as a unit of account for international transactions by allowing it to circulate outside the mainland. Deepening and widening of this available pool of currency overseas, including via the development of nascent offshore RMB-denominated asset markets that would also test the renminbi’s fitness as an investment currency was to be the second step. Foreign financial and non-financial overseas entities were permitted in 2010 to tap into these accumulated overseas balances and issue RMB-denominated bonds, dubbed “dim sum” bonds. A series of central bank currency swap lines with assured provision of liquidity was also aggressively pushed through in the time since to promote the development of offshore RMB financial centers.

In late-2011, the third stage was inaugurated with enterprises in Hong Kong and qualified foreign institutional investors permitted to use offshore renminbi proceeds for onshore foreign direct and equity investments, respectively. These ‘reverse’ flow measures have progressively been broadened and accelerated thereafter, capped off by a series of liberalizing initiatives over the past year. In November 2014, international investors were granted direct access via Hong-Kong based brokerages to mainland equity markets by way of the Shanghai-Hong Kong “Stock Connect” scheme. In July 2015, the prior approval requirement to invest in China’s onshore bond markets was scrapped for foreign central banks and other sovereign-linked investors. And earlier this December, South Korea, following in the footsteps of HSBC (a foreign bank) and Daimler (a non-financial multi-national), became the first sovereign to issue RMB-denominated bonds onshore, dubbed “panda bonds” – in effect, tapping into a much wider pool of capital than the stock of existing currency circulating offshore.

Alongside, as this process of internationalization has proceeded apace, a complementary set of far-reaching financial deepening initiatives too were undertaken. In August 2015, as part of a dramatic further reform of the exchange rate, China shed its dollar fetters and transitioned to a fully ‘managed float’ regime that is more amenable to two-way price signals. An effective exchange rate index composed of a trade-weighted basket of 13 currencies is to henceforth guide the renminbi’s valuation in forex markets. In late-October, as part of an equally noteworthy liberalization of interest rates, the deposit interest rate ceiling for commercial banks and rural credit cooperatives was scrapped. The scrapping closes the chapter on major administrative interest rate de-control that began with the liberalization of inter-bank rates in 1996, the raising of deposit rate ceilings and lowering of loan rate floors in 2003, and the scrapping of the loan rate floor altogether in July 2013.

Lastly, in October 2015 a new Cross-border Inter-bank Payments System (CIPS) that connects global RMB users under one umbrella and provides a streamlined platform for clearance and settlement of payments was launched. In time, as the system acquires its own dedicated communications line and is expanded to enable offshore-to-offshore RMB payments (in addition to those in and out of China), it will have the ability to operate independently of the West’s SWIFT inter-bank secure financial messaging network. In retrospect, it will also be seen as an important piece of the missing market infrastructure jigsaw that enabled Asian institutional investors to enjoy same-day settlement of local currency-denominated securities transactions and thereby alleviate their “third time zone” dependence problem.

On November 30, 2015, a currency internationalization journey that had commenced in response to the rejection of a proposal for a new international reserve currency (and an enhanced role for the IMF’s SDR in this regard) reached an important way-station: the elevation of the renminbi itself to the ranks of a “freely usable” international reserve currency. The IMF’s decision to formally include the renminbi as one of five hard currencies in its SDR basket, and the half-decade or so of liberalizing reforms leading into it, is likely to be recorded by economic historians with the corresponding level of attention that is devoted to the establishment of the Federal Reserve System almost-exactly a century ago.

So where to from here for the renminbi in its rise as a leading reserve currency within the 21st century international monetary system?

Economic history again provides a useful guide. In the early-1910s, despite being the world’s largest exporting nation, virtually no trade credit was provided by U.S. financial institutions or denominated in dollars. Such credits, rather, were originated in London, denominated in sterling, linked to Great Britain’s global trading network, traded on active secondary markets back in London, and backed by the Bank of England during bouts of market illiquidity. With the creation of the Federal Reserve, which was authorized to use trade credits to manage credit conditions via open market operations (central bank purchase of government debt was still taboo at the time), and the removal of overseas branching prohibitions, which enabled the U.S. banks to expand dollar-based financing abroad, the dollar rivaled sterling as a leading international currency by the end of the decade.

Likewise, as renminbi-based claims increasingly circulate overseas, both linked to and de-linked from Chinese enterprise-based trade, investment and domestic consumption patterns; as a large and active secondary market for RMB-denominated securities, including for Chinese government bonds that is open to residents and non-residents alike, acquires qualitatively greater depth; and as the People’s Bank establishes its credentials as a market-maker of last resort for such securities, the renminbi will gradually assume its position aside the dollar as the premier reserve currency within the system. This transition is likely to be measured in decades though than years. To play banker to the world, China must ultimately be prepared to borrow short, lend long, and buttress its lender-of-last-resort function with a fiscal backstop that is globally credible.

A super-sovereign reserve currency that is managed by a global institution and can be used to, both, create and control global liquidity is a worthy aspiration. The absence of private markets to trade as well as hedge risks associated with such SDR-based instruments means that this aspiration is unlikely to be realized anytime soon. Given the generally tattered state of the global financial safety net however a worthy assignment for China’s G20 presidency should be to imaginatively lay the groundwork for a lesser set of attainable ends that would broaden SDR-linked usage arrangements within the international monetary system. This could range from counter-cyclical provision of all financing during crises with SDR loans (which would automatically get extinguished once the loans are paid back, post-crisis) to the rule-based emission of SDRs during crises to fund the IMF’s operations as it intermediates the provision of liquidity between key reserve currency central banks and the recipient central banks in crisis-stricken countries. In extremis, the IMF could even be authorized down the line, as manager of this reserve asset, to place bets against speculators and stabilize financial markets during panic-induced bouts of systemic illiquidity.

As a recent entrant to the SDR club, it would be a fitting contribution in a role that is only bound to grow in leaps and bounds in the years ahead.

RMB SDR
printTweet
You might also like
Back to Top
CHINA US Focus 2018 China-United States Exchange Foundation. All rights reserved. Disclaimer