Time to Choose the Outcome for U.S.-China Relations

A major piece in the most recent weekend edition of the Wall Street Journal points out that it’s time to rethink about the U.S. relations with China. This thought provoking article is extremely timely and the issues raised are critical to the future of both countries. 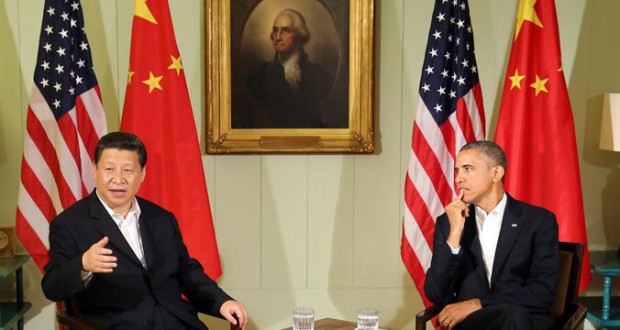 Just as the author detailed the vast change China has undergone since Nixon talked about China and then broke the ice with his historic visit to China, so has America.

Since the turn of the century, the last two American presidents have strived mightily to sell the message that everybody in the world should be more like us. Follow the American model of exceptionalism—as the thinking goes–and there will be peace and prosperity in the world.

Few bought the message; instead the world has become a much more volatile and dangerous place. From Ukraine through the Middle East to most of African, give or take, 900 million people face daily threats of death and destruction.

While beheadings on TV and tragic drowning of desperate refugees in the Mediterranean can’t be directly attributed to U.S. action or inaction, it’s a measure of how little American exceptionalism has made a difference. Instead, the U.S. is fully occupied with putting the genies back into the bottles in Afghanistan and Iraq.

By various estimates, the wars in just those two countries are costing the American taxpayers well north of $3 trillion and the bleeding hasn’t stopped. The official federal deficit is north of $18 trillion and still increasing. Is Washington seriously assuming that we can keep printing our way out of fiscal deficit?

What cost are we willing to pay in order to coerce China into following our exceptional footsteps? Is that expectation even realistic?

Since Nixon’s historic visit, China has been a willing economic partner with the U.S. but has never been interested in following the American model of democracy and government. Now that China is nearly on par with America economically and having seen the debacle of the Wall Street induced financial crisis, China is even less inclined to follow the U.S.

This does not mean that China is ready or desires to take on the U.S. as an adversary. China’s defense strategy depends on a credible ability to strike back with telling blows when provoked, rather than developing the capability to deliver the first blow.

Part of that strategy is for China to let the U.S. know that they have the capacity to retaliate. In the ‘90s, China invited chief of intelligence (Danny Stillman) from Los Alamos to China’s nuclear test facility so he can accurately appraise China’s nuclear weapon capability.

A Chinese submarine surfaced in the middle of the Kitty Hawk flotilla to let Pentagon know that China has the technology to approach the carrier undetected. China shot down their own satellite to demonstrate their ability to compete in star wars.

Most recently China has successfully test-fired a hypersonic delivery vehicle capable of speeds ten times the speed of sound and capable of penetrating America’s missile defenses. These tactical moves are designed to let Washington know that China would not be an easy rollover.

Seems intuitively obvious to this writer that it will always be orders of magnitude more costly to develop first strike weapons that can overwhelm the adversary’s capability to retaliate. It’s the kind of asymmetric competition that does not make economic sense for the Pentagon.

Defense Secretary Carter has been vocal about China’s activity in South China Sea, as though he is building toward a provocation and a confrontation—preparatory to another Gulf of Tonkin like resolution?

Even DoD spokesperson has acknowledged that China has been late to the game of dredging and filling land to build bases. Others such as Philippines and Vietnam have been reclaiming and establishing bases on islands many years before China.

DoD expressed concerns that China’s intention is to interfere with high seas navigation. Since the presence of islets and shoals is dangerous to safe passage and is thus well marked on most maritime charts as areas to avoid, it’s hard to understand how reclaiming the islands can increase hazards to shipping. As if to answer Carter’s concern, the Chinese has erected lighthouses to help with safe navigation.

In game theory, there are four possible outcomes to any bilateral relations. However, in the case of the U.S. and China, neither party is likely to win at the expense of the other.

Only win-win or lose-lose outcomes are possible. Hopefully the leaders in Washington will see the wisdom of choosing the right outcome.