A Step Forward in US-China Ties 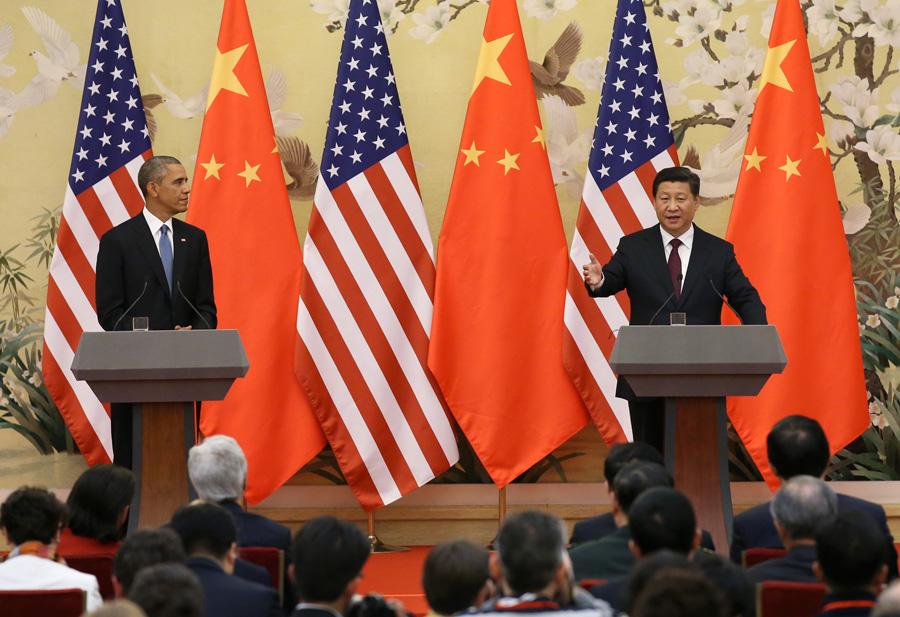 The November 11 bilateral summit between Presidents Xi Jinping and Barack Obama in Beijing was a welcome step forward in Sino-American relations. While some tensions were evident behind the scenes and during the two leaders’ joint press conference, on balance the two sides accomplished a lot in one day of summitry.

Of course, the hours the two leaders spent together in the Great Hall of the People and adjacent Zhongnanhai leadership compound were presaged by months of preparations by senior aides. National Security Advisor Susan Rice’s July visit to Beijing and State Councilor Yang Jiechi’s November visit to Boston and Washington were key to the outcomes of the summit. During the latter, Secretary of State John Kerry hosted Yang in his home city of Boston for extended conversations and meals in relaxed settings—which apparently were critical to “getting to yes” on the Joint Agreement on Climate Change and Clean Energy Cooperation that was announced during the summit.

Under the agreement, the United States would cut its 2005 level of carbon emissions by 26-28 percent before the year 2025 (representing a doubling of its current pace of reducing its CO2 emissions). For its part, China would reach its peak in carbon emissions by 2030 and will strive to derive 20 percent of its energy from non-carbon emission sources by the same year (which drew immediate criticism from incoming U.S. Senate Majority Leader Mitch McConnell).

The careful preparations were also key to several other agreements that were announced during the summit:

These were the formal agreements reached at the summit. The White House put out two separate “Fact Sheets” detailing other areas of commonality and agreement, including:

All in all, this is an impressive list of agreements and achievements from a one-day summit. They are tangible, specific, and achievable. While the two sides did not issue a lengthy Joint Statement (as has been customary in past summits) detailing the two sides’ respective positions on dozens of international issues, this time it was determined to be more modest but practical in their aspirations and achievements.   All too often in the past the aspirational language in the Joint Statements is not implemented after the summit concludes. To be sure, in this instance, it still remains to be seen if the climate change and military-to-military agreements will be realized in practice.

The military MOUs are very important confidence building measures (CBMs) that will hopefully not only reduce the risk of military accidents and the possibility of escalation after accidents—but also will become the basis for further such CBMs in the future (mutual notification on ballistic missile launches is being discussed). Until now, the Chinese side has steadfastly rebuffed American entreaties to enter into such agreements, as Beijing argued (wrongly) that such agreements only occur between adversaries such as the United States and former Soviet Union during the Cold War. Following almost two decades (dating back to the Clinton administration) of refusing to negotiate or sign such agreements, the Chinese side has now crossed an important conceptual threshold by entering into such CBMs with the United States. The international seas and airspace adjacent to China (where U.S. military forces regularly patrol) are now safer places owing to these agreements. Taken together with intensified military-to-military exchanges over the past year, perhaps the increasingly acute “security dilemma” between the two powers is relaxing somewhat.

Whither the “New Type of Major Country Relations”?

Chinese President Xi Jinping continued to tout his cherished concept and slogan of building a “new type of major country relations” (recently changed from major power relations), but President Obama remained silent on the subject. Obama’s and the U.S. government’s steadfast refusal to officially endorse the phrase dates back more than a year. The American side does support the goal of not replicating the history of conflict between rising and established powers (sometimes called the “Thucydides Trap”), but the Obama administration is more interested in taking practical steps towards this end rather than engaging in what National Security Council official Evan Medeiros recently described as “slogan diplomacy” (口号外交). The U.S. side is also uncomfortable with some of the specific definitions that President Xi has used to define the concept. At the summit, according to Xinhua News Agency, Xi put forward six new “priorities” for such a “new type” of U.S.-China relations—which the American side will now need to study carefully.

Whether or not the two sides agree to an overarching framework or catchphrase to describe the relationship, the 2014 Beijing summit seems to have temporarily arrested the hemorrhaging that many analysts have perceived over the past five years. A similar stabilization occurred following former President Hu Jintao’s 2011 state visit to Washington, only for the relationship to return to a downward trajectory and heightened tensions within months. It remains to be seen if the same pattern occurs this time. To be certain, the United States and China have a wide range of differences and difficulties, while the competitive dynamic has eclipsed the cooperative element in recent years—yet it remains imperative that the two governments do what they can to manage the competition, buffer the tensions, while trying to broaden the arenas of tangible cooperation between them and together with other nations. The U.S.-China relationship certainly has its difficulties, but it is a marriage in which divorce is not an option.