Abe’s Speech Gets a Failing Grade

Japan’s Prime Minister Shinzo Abe’s speech on the 70th anniversary of the end of WWII proves that he is master of words that couldn’t be reduced to substance. 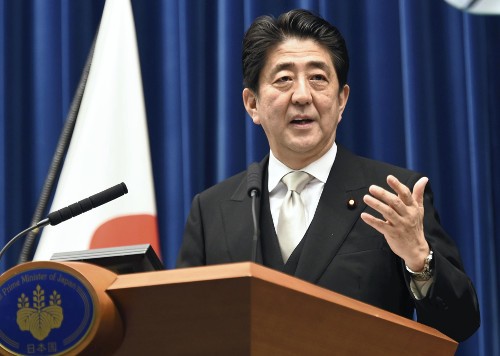 The past PM Tomiichi Murayama, in contrast, gave the 50th anniversary speech that was 60% shorter, yet was met with more favorable reaction around the world.

In Abe’s near 1700-word, rambling speech of regret, there were phrases here and there that might appeal to those listening intently for a breakthrough in Japan’s attitude about WWII. But the listeners would find no breakthroughs and plenty of fodder for objections.

He began his speech reviewing his version of history that led to Japan becoming the aggressor of WWII. In summary, the colonial western powers with their protectionist economic policy caused Japan to take “the wrong course and advanced along the road to war.” In other words, the West forced Japan into becoming the aggressor.

Abe barely acknowledged the comfort women issue, the one major issue that has bedeviled Japan’s relations with Asia and the one (of many) issue that Japan has not been able to come to grips with.

Abe said early in his speech, “We must never forget that there were women behind the battlefields whose honor and dignity were severely injured.” Does that mean he was admitting that Japan forced young women and girls into sexual slavery and ruined their bodies and dreams of future?

Toward the end of his speech, he said, “We will engrave in our hearts the past, when the dignity and honor of many women were severely injured during wars in the 20th century.” That was it, his total reference to the comfort women issue.

There was a paragraph of remarkable double talk that’s one heck of a head scratcher. He said, “We must not let our children, grandchildren, even further generations to come, who have nothing to do with that war, be predestined to apologize.”

In practically the same breath, he then said, “We have the responsibility to inherit the past, in all humbleness, and pass it on the future.” Huh? Double huh? This is the kind of double speak that leaves plenty of room for future interpretations and misinterpretations.

He didn’t even make passing references to all the atrocities committed by the Imperial troops. His reference to Japan’s unpleasant past was as artful as Hirohito’s national proclamation in admitting defeat.

It has become increasingly obvious that Japanese politicians and government leaders need help in crafting a straightforward, mince no word apology that would be as effective as Willy Brandt’s act of contrition by kneeling before a monument in Warsaw’s Jewish ghetto.

How should an apology sound that would finally put the history of WWII in the rear view mirror for the people of Asia and Japan as well? I have a version to propose to the leaders of Japan.

“To the people of the world, as the Prime Minister of Japan, I wish to apologize to you on behalf of Japan for all the wanton acts of war and brutal crimes against humanity that the Japanese imperial forces committed during World War II.

“I apologize for the destruction of property and killing of innocent civilians.

“I apologize for the rape and murder of women and for forcing young women of all races into sexual slavery in the military brothels that were organized by Japan’s military.

“I apologize for the biological and chemical warfare Japan launched in China and for the live biological experiments conducted on POWs and civilians.

“I apologize for the inhumane hardships that civilians and POWs endured in slave labor camps for the duration of the war.

“I urge all relevant Japanese organizations to quickly make amends to any survivors and heirs of the victims from the aforementioned atrocities.

“I solemnly swear that to ensure history is not repeated, the textbooks in Japan shall describe the unvarnished truth of the War in full and without distortion.”

My version of apology consists of less than 200 words, less than 1/3rd of Murayama’s and about 1/10th of Abe’s. I’d wager less is more. A simply worded apology with clarity and absent of obfuscation would finally put the memories of WWII to rest.

Willy Brandt will be remembered for his act of reconciliation. A place of immortality awaits a courageous leader from Japan for an act of genuine atonement.