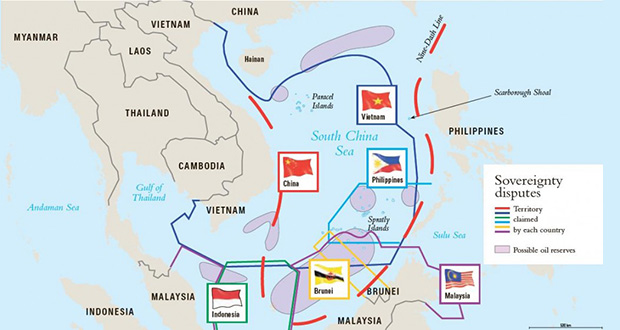 The 65th anniversary of the establishment of diplomatic relations between China and Vietnam will be celebrated in 2015. While it provides a special opportunity for the two countries to deepen their relationship, enhanced efforts are needed to control disputes between them over the South China Sea, such as  the 2014 drilling rig crisis.

From mid-2013 and during the first four months of 2014 China and Vietnam maintained stability in the South China Sea. The year 2014 started with  promising  management of the South China Sea situation. A departmental-level mechanism for bilateral consultation on joint development at sea was initiated in January 2014. It has opened a new channel for both countries to deal with more sensitive issues, and of jointly exploring and exploiting non-living resources in the  disputed sea area claimed by both countries. In April a second round of talks were held to share views and explore this new potential area of cooperation.

Meanwhile, two parallel departmental-level mechanisms moved ahead as scheduled. In February, the fifth round of talks was held in Hanoi for the working groups from China and Vietnam to discuss issues on maritime delimitation in the sea area outside the mouth of the Gulf of Tonkin (Beibu Bay in Chinese). Along with the delimitation talks, the fifth round of negotiation on cooperation on less sensitive sea issues was convened between experts from both countries, during which an agreement was reached on a plan to implement two co-operative projects, joint research on the management of the marine and island environment in the Gulf of Tonkin and a comparative study on sediment dating back to the Holocene epoch in the Red River Delta and the Yangtze River Delta.

On May 2, the drilling rig HYSY-981, owned by China National Offshore Oil Corporation, was dispatched to areas 17 nautical miles west of both Triton Island (Zhongjian Nan Island in Chinese) of Xisha Islands (Paracel islands) and the baseline of the territorial waters of Xisha Islands, to start drilling operation. Vietnam denounced the stationing of the drilling rig as illegal and demanded its withdrawal by claiming that the rig’s area of operation was within Vietnam’s exclusive economic zone and continental shelf as measured from its coastline. China rebuffed Vietnam by stating that the drilling operation was carried out “totally within waters off China’s Xisha islands,” and accused Vietnam of trying to disrupt the drilling operations. China further demanded that Vietnam cease such activities and withdraw its vessels from the area.

Tensions at sea increased when both countries strengthened their presence at the operation area by sending more vessels, law enforcement as well as fishing vessels, to stop the other’s actions. Demonstration against China spread over the big cities of Vietnam including Da Nang, Hu Chi Ming and Hanoi. In mid-May riots against foreign-invested enterprises in Southern and Central Vietnam caused not only damage of assets of those companies but also casualties among employees working there, including Chinese nationals. Chinese, Malaysian, Japanese, Singaporean, and South Korean companies were affected by the riots. In coordination with Vietnam, China sent ships to repatriate its nationals affected by the riots. Vietnam had been making efforts to restore its reputation among foreign investors to attract foreign direct investment, which is important to Vietnam’s economic development. These developments hurt both sides. Tension relating to the drilling operation persisted until China announced completion of the operation of the HYSY 981 in mid-July followed by withdrawal of the drilling rig.

Efforts to re-establish trust and cooperation

In the aftermath of the ending of the crisis the two countries have initiated a process aimed at rebuilding trust, normalizing the overall relationship, and addressing the territorial differences. The first step was taken when Le Hong Anh, special envoy of Nguyen Phu Trong, general secretary of the Communist Party of Vietnam, visited China in late August. Since, bilateral interaction has intensified. The top bilateral cooperation mechanism — China-Vietnam Steering Committee for Bilateral Cooperation — completed its seventh meeting in Hanoi. At the meeting,  State Councilor Yang Jiechi of China and Deputy Prime Minister and Foreign Minister Pham Binh Minh of Vietnam headed their respective delegations. Also in October, the prime ministers of the countries met on the sidelines of the Asia-Europe Meeting (ASEM) in Italy. In addition, Vietnam’s Defense Minister Phung Quang Thanhheaded a delegation to China for talks with his Chinese counterpart Chang Wanquan. In November China’s president met with his Vietnamese counterpart in Beijing. Finally, in late December a delegation from the National Committee of the Chinese People’s Political Consultative Conference, headed by its Chairman Yu Zhengsheng, made a “working visit” to Vietnam.

The active diplomacy is aimed at re-establishing the cooperative relationship following the drilling rig crisis. The leaders in both countries have strived to build a cooperative and mutually beneficial relationship. Thus, since the end of the drilling crisis the relationship has been stabilized. However, this does not imply that China and Vietnam refrain from lodging official complaints about on matters relating to the South China Sea. This has been displayed in official protests by Vietnam  over China’s expansion of a runway construction in the Paracels, land reclamation in the Spratlys, and China’s Position Paper on“the Matter of Jurisdiction in the South China Sea Arbitration initiated by the Philippines”.In response China officially complained about Vietnam’s statement relating to China’s position paper.

The South China Sea issues are very sensitive in both China and Vietnam. The May-July drilling rig incident sent a strong message to both countries that one incident at sea, if not well managed, can lead to deep tension in bilateral relations and negatively affect the overall relationship. The damage to the mutual trust takes time to overcome.

These repercussions of the drilling crisis may not have long term damaging impact on bilateral relations. It may create the necessary impetus for both countries to reconsider their positions and policies as well as to further develop the bilateral management approach. In the later context it is necessary that the approach is further developed and deepened to address the full range of disputes between the two countries. If this is not done incidents are likely to re-occur in areas that are not included on the agenda and hence not covered by the approach.

In the aftermath of last year’s drilling rig crisis, 2015 can be decisive in how the two countries will address their differences over the South China Sea. The challenge is how to properly manage these differences. It is here argued that the bilateral dispute management approach needs to be further developed and all outstanding issues need to be addressed. If this were successfully carried out it would further elevate the traditional friendship and deepen comprehensive strategic cooperation between the two countries.