Limits of Law in the South China Sea 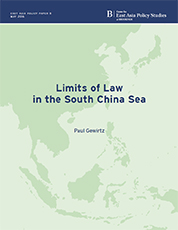 The vast South China Sea has become one of the world’s most dangerous hotspots. Through words and deeds, six claimants including China contend for control over numerous small land features and resource-rich waters, with the United States also heavily involved because of alliances and our own security and economic interests. The great geopolitical question of our age, whether the United States as the established dominant superpower can co-exist with a re-emerging powerful China, sits on the sea’s horizon like a huge and taunting Cheshire Cat.

China, Taiwan, the Philippines, Vietnam, Brunei, and Malaysia all claim sovereignty over some of these land features and waters, and the claims conflict. China, through its “nine-dash line” map and many statements, has claimed at the very least sovereignty over all the islands and rocks in the South China Sea and rights over the adjacent waters. China has also boldly undertaken “land reclamations” that build on land features, turning claims into physical structures and threatening further militarization. The other five stakeholders have conflicting claims over land features that in turn produce numerous additional overlapping and conflicting claims over adjacent waters and how they are used. Neither the vastness of the sea nor the smallness of the disputed land specks has prevented an escalation in intensity in recent years. Concerns about security and resources have driven much of the tension, and rival nationalisms in stakeholder countries breathe fire on the waters.

The risk that accidents or small conflicts will lead to dangerous escalations is constant. But there is not yet a path ahead for resolving the many disputes and controlling the serious risks they pose. However, the United States has articulated an approach. We have stated that we do not take a position on the competing sovereignty claims but we have called for a law-based and rules-based resolution of the competing claims. As President Obama has recently said, the United States is committed to “a regional order where international rules and norms—and the rights of all nations, large and small—are upheld. [Disputes] between claimants in the region must be resolved peacefully, through legal means, such as the upcoming arbitration ruling under the U.N. Convention on the Law of the Seas, which the parties are obligated to respect and abide by.”

This statement invokes one of the hallmark ideas of President Obama’s foreign policy: International issues should be resolved in a rules-based way through the rule of law. Law-based approaches indeed have many advantages: They are peaceful, offer the promise of fair and impartial application of rules, and can protect the weak as well as the strong. In addition, through application of law, legal tribunals can also provide solutions to issues that are otherwise unavailable because of political stalemate elsewhere.

The point of this essay is both simple and regretful: Although a rules-based and law-based approach in the international arena is an admirable aspiration, law will not solve the dangerous problems in the South China Sea. More specifically, the upcoming ruling in the case brought by the Philippines against China before an arbitration tribunal under the U.N. Convention the Law of the Seas will not solve the problems or even make a major headway in resolving them. An examination of the issues before the tribunal and its most likely decisions demonstrate that the tribunal and law can make only a very limited contribution to resolving the South China Sea crisis. Law will not save us from continuing to focus predominantly on negotiations and power politics.

(Reprinted with permission from the Brookings Institution)