THAAD: A Major Security Risk for the ROK

Instead of facilitating peace and stability on the Korean Peninsula, THAAD will seriously sabotage the already fragile regional strategic balance. It will inevitably escalate tensions on the Peninsula, trigger a new round of damaging security competition between two Koreas, i.e., one party’s endeavors to consolidate security must be at the expense of the other’s security interests. Such a scenario has repeatedly replayed between the two Koreas in the past two decades. The THAAD deployment, which is touted as a security guarantee for ROK, will actually render it even more insecure. 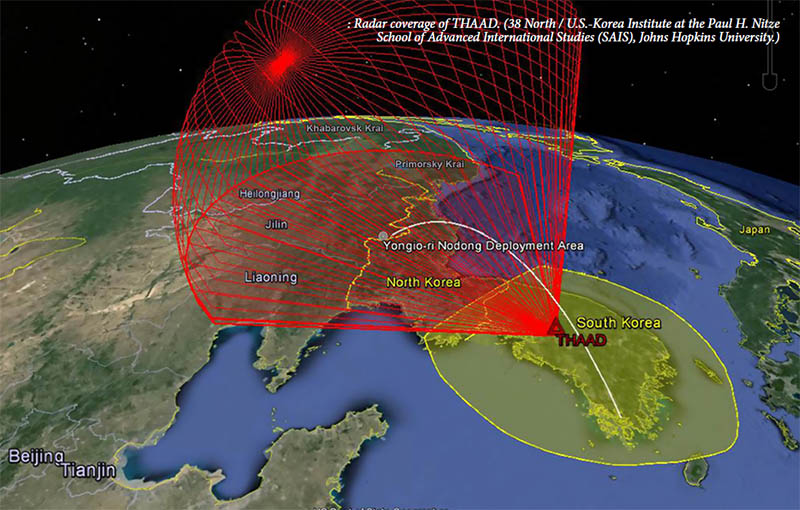 A bigger problem is THAAD will effectively bind the ROK on the US’ war chariot, exposing it to more complex and severe security threats. After building an anti-missile “wall” in Europe that extends to Russia’s doorstep under the pretext of “Iran missile threat”, the US is taking advantage of the “North Korea missile threat” to build an East Asian version of the “wall”, aiming to formulate a global anti-missile system that spans the Atlantic and Pacific Oceans. Such a system will substantially boost US early warning and interception capabilities against Chinese strategic weapons, and fundamentally disturb strategic equilibrium among China, Russia and the US. In the subsequent fierce major-power wrangling for balance and rebalance, South Korea will inevitably be the foremost, and weakest victim. For instance, once THAAD is deployed in South Korea, the base hosting it will logically be put on the lists of foremost targets to be destroyed in war by Chinese and Russian strategic security planners.

Technically, the US has not been honest with the ROK about the use and specifications of THAAD. The clamor about THAAD has much to do with the commercial hyperbole by Raytheon Company, one of the major contractors. As a business, what it cares about most is not whether deploying THAAD in the ROK can provide protection against DPRK missiles, but whether it can be deployed, because deployment means huge profits. The Pentagon and US State Department have obviously been active pushers. Considering Chinese strategic concerns about the AN/PTY-2 radar affiliated to THAAD, the ROK has insisted it would adopt the terminal mode radar with a 600-kilometer detection range, instead of the 2,000-kilometer forward base model radar, and hence received a guarantee about technical information from the US government and contractors. But the US has lied about the key information regarding ROK strategic security. Materials provided by high-ranking US officials at a hearing at the US Congress earlier this year indicate that, in case of emergency, the radar can undergo on-the-spot transfer in eight hours, from the terminal mode targeted at North Korea to the forward base model, and be used together with the S-band radar in Alaska (LRDR) to conduct whole-course tracking and monitoring of all Chinese guided missiles flying toward the continental US. Even some American missile experts have pointed out that THAAD will not deliver the anticipated protection against North Korea’s “Rodong” missiles, but it certainly will be an important pillar of the US global anti-missile system.

Many angry Chinese citizens, even scholars, advocate “in response to THAAD, China must make moves that will let the US and the ROK feel hurt”. I do not think so. Since THAAD is a strategic issue, there will be a long process of strategic gaming. In such a new strategic game instigated by the US and ROK, China should first oppose, second not be afraid, and third, counter-react forcefully. There are multiple options for China from a long-term perspective. In the strategic game that we do not want to see but has been imposed upon us, we should keep in mind he who laughs last will be the winner. Our response should be reasonable, forceful, yet restrained. Losing our mind at others’ instigation is not in our country’s best interest.

The US is the initiator of evil in this case. When the US breaks regional strategic balance, China must conduct its own version of strategic rebalancing. For example, it will enhance its own capabilities for missile attacks, including those for jamming THAAD’s radar system, as well as for eliminating it in the first wave of attacks; establish its own anti-missile capabilities; or develop its own hypersonic attack weapons, more intelligent drone systems capable of long-range strikes, turning the US Global Missile Defense regime into a 21st century “Maginot Line”.

No matter how the wrangling over THAAD evolves, it will ignite strategic gaming as well as new and high military technology competition among major powers. Pentagon planners may be rejoicing over the ROK decision to embrace the American project, and Tokyo and Seoul’s agreement on sharing information from their AN/PTY-2 radars. But it will be utterly beyond the Pentagon’s control how other major powers who feel victimized react after THADD is deployed.