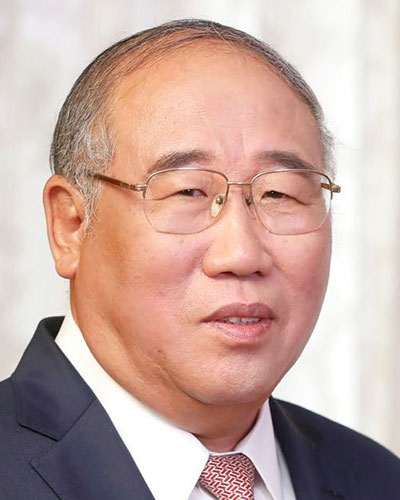 H.E. Mr. XIE Zhenhua has been Special Advisor for Climate Change Affairs (MEE) of China since April 2020. He was Special Representative for Climate Change Affairs of China from 2015 to 2019. In the past decades, he served as Head of the former National Environmental Protection Agency, Minister of the former State Environmental Protection Administration, and Vice Chairman (Minister Level) of the National Development and Reform Commission (NDRC), as well as Vice Chairman for the Committee on Population, Resources and Environment of the Chinese People’s Political Consultative Conference (CPPCC) at its 12th session. He was a member of the Central Committee of the CPC at its 16th and 18th sessions, and a member of the Central Commission for Discipline Inspection of the Communist Party of China (CPC) at its 15th and 17th sessions.

Minister XIE Zhenhua has long overseen environmental protection, resource conservation, energy saving and pollution reductions and climate change affairs in China, and has thus made outstanding contributions to the green, low-carbon, circular and sustainable development and ecological civilization progress in China, as well as to the global environment and climate governance. Since 2007, Minister XIE Zhenhua has been leading the Chinese negotiation team to make unremitting efforts for more than ten consecutive years, and played a prominent role in the adoption, signing, entry into force and implementation of the Paris Agreement, as well as in the adoption of the implementation rules of the Paris Agreement. He has also promoted concrete cooperation in energy conservation, emission reductions and green and low-carbon development between China and more than 30 countries, regions and international organizations, and helped train over one thousand officials and technicians in the field of climate change for more than 100 developing countries.