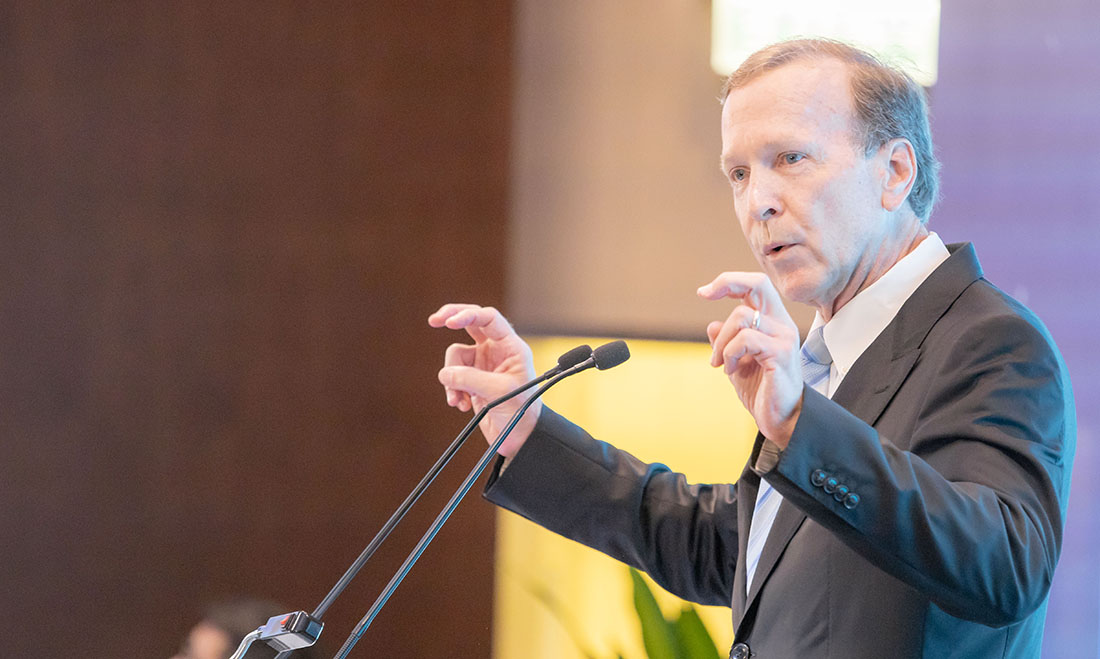 I’m proud to be delivering this speech as Chairman of the George HW Bush Foundation for US China Relations which is gearing up to do great work to carry out my father’s legacy interest in closer ties between our two great countries and which is run so ably by a real China expert, David Firestein. We have a wonderful team.

Throughout his amazing life, my father played important roles in shaping US policy towards China. He often stated that the US-China relationship was the most important bilateral relationship in the world. He had deep understanding of the cultural, political, and economic complexities vital to normalizing ties. So my views are largely shaped by my father’s views but they are also shaped by over 140 trips to China over the past 44 years.

My first trip to China was in 1975 when my father was the “bicycling ambassador” representing the US in Beijing. This was a time towards the end of the Cultural Revolution where there were very few personal liberties, China was pretty much closed off to the west. I remember going with my family to the zoo to see the pandas or to the Forbidden City only to notice that we were being followed by throngs of people who were curious to see westerners. I’ve been back many times and have witnessed China’s rise first hand.

At the core of our American value system is individual freedom. We know that once you have enjoyed freedom, there is no giving it back. And as a freedom-loving American, I have marveled that over the past 44 years there has been an unprecedented freedom movement in China where more people have gained more freedoms in the shortest period of time in all of human history. The freedom to choose where to live, who to marry, what career to pursue. The freedom to travel abroad, the freedom to seek the best education anywhere in the world, to enjoy a better quality of life. Those freedoms and many many more were unimaginable 44 years ago.

As China rises, so too does the anti-China rhetoric. You’d think that China is taking advantage of the United States at every turn to gain dominance over us. As most in this room know, the truth is that over the past 40 years there has been tremendous mutual benefit to the United States and China from closer commercial, educational, diplomatic, and cultural relations. Globalization, and specifically our connectivity to China, has contributed to a sustained growth in the US economy, has led to full employment, and has benefited consumers with lower cost, high quality goods. Globalization, and specifically connectivity to the US has been a major contributor to China’s success in building a huge middle class and lifting hundreds of millions of people out of poverty. Our bilateral relationship has had bumps in the road but has produced a classic win-win scenario.

Central to our relationship is the question of whether China is a natural friend or a foe of the US.

My father who fought in the Pacific in WWII, who lived in China for 15 months in the mid 70s serving as our Chief Liaison Officer, who worked with Chinese in the UN and as Vice President and President, believed that China and the US have historical roots for deep friendship. He believed there is more that unites us than divides us and that the roots of our relationship today are deep enough to withstand the current typhoon. And he was disturbed at the rising anti-China sentiment that had become so prominent towards the end of his life.

So why the discord? Everyone in this room has more a studied reply to this question and we’ve heard plenty of explanations yesterday.

The very fact of China’s economic rise is causing angst. Americans are quite competitive and when we see a much larger country become the second largest economy in the world with GDP growth rates of over 6% per year, then our competitive juices start to flow. Many who fear China, position this as a competition and they point to the trade deficit to suggest China is winning and we’re losing. The zero-sum, winner-loser mentality is wrong and naïve. The truth is our trade deficit with China is natural – the richer country buys more stuff from the poorer country. As China develops and needs energy, agriculture, and as consumer demand high-end branded products, the deficit will shrink. In the meantime, both countries benefit from our bilateral trade.

The demonization of China is being fueled by a rising nationalism in the US that is manifested in anti-immigrant, anti-Chinese, pro-America First rhetoric. These nationalists, joined by a broad coalition of unlikely bedfellows, view China’s ruling elite as a monolithic communist authoritarian system that has no regard for personal liberty or human rights. It is clear to me that China is not ruled by a monolithic regime where one guy makes the decisions without regard to the sentiments of other leaders or the care and concern for the people. It is impressive to me how leaders rise based on performance with one measure of success being that person’s areas’ GDP growth. Often times, a successful district or city official will rise to be a provincial or central government leader and so on. It is also quite clear that the Chinese people aspire to enjoy a better standard of living, safe food, clean air to breathe, improved health care, and a better system of education. And the government has put in five year plan after five year plan that has led to the gradual maturation of societal systems that has led to unprecedented economic growth inching the country closer and closer to what we in America would refer to as the American dream, what President Xi has called the Chinese dream, what one might call the American dream with Chinese characteristics.

Some critics of China feel that only a western style democracy will give the Chinese people a full set of liberties. Cultural traditions and institutions required to sustain a thriving democracy are not present in China today. A premature move towards a US style democracy would be destabilizing and would most likely cause major setbacks to the freedoms gained over the past 40 years. The bottom line is that our system of government, our form of democracy, would not work for China just like China’s system would not work for us.

While on a family vacation last week I had a rather heated discussion, with a quite astute son-in-law. He feels, like many in America, that China is fundamentally flawed in terms of human rights sighting the treatment of ethnic minorities in Xinjiang. He complained about the growing use of intrusive big brother tactics including monitoring social media to crack down on criticism of the government, the use of big data to give individuals a social credit rating designed to control behavior, and the use of facial recognition technologies that monitor citizens. He complained about the nefarious nature of the 1000 Talents Program and the aggressive use of the Belt and Road Initiative to gain influence globally. He expressed concern that the Chinese are increasingly cutting back on basic freedoms and seeking a dominant position in the world. At one point he even compared the authoritarian rule of China to that of Saddam Hussein in Iraq and Hitler in Nazi Germany. I almost flew out of my seat at this point. Clearly the wine was speaking. My son-in-law has never been to China, he has no appreciation for the distance Chinese people have traveled to obtain unimaginable freedoms, and his facts and assumptions are clearly flawed and based on half-truths or all out fake news.

His views show just how hysterical and challenging the times are. The depth of his convictions indicates that we are at a critical time in the US-China relationship. My son-in-law and many Americans only know what they hear. Those that believe that the US and China ought to work together need to find our voices.

I urge my Chinese friends to be as transparent as possible as it relates to intentions and implementation of programs that are the target of widespread global criticism. I advise my American friends not meddle in the internal affairs of China. Chinese leaders are walking a tight rope in terms of maintaining internal stability so that the solid platform that has produced amazing results can continue to improve the quality of life for more of its citizens. If the Chinese government gets carried away with denying personal liberties, then there will be pushbacks from within. Once people enjoy the taste of freedom there is no turning back.

Like in any bilateral relationship between friendly nations, there are plenty of issues that need to be addressed. Many of our speakers and experts have articulated these better than I ever could -- we need to address trade issues, IP protection, industrial sabotage, access to markets, national security, and human rights related matters.

To our government I would suggest we embrace the George H.W. Bush style of leadership to address these issues -- a style that looks to create and maintain multiple levels of frequent dialogue, that seeks to build trust, that puts the parties in the other guys’ shoes, that looks for the best in others, that is respectful, that accounts for cultural differences, an approach that is encouraging and hopeful, one that is honest, direct, and targeted.

It has been frustrating as an American to see politicians use China as a political whipping boy and to see and hear one sided anti-China reports over recent years that disregard the fact that our bilateral relationship has benefited the US tremendously in the past and still does. So it was nice to see a letter written by five US leaders and signed by nearly 100 others that openly stated, “China is not an economic enemy or existential national security threat” to the United States. I encourage others to speak out to add balance to the debate so that over time my father’s vision for closer ties that lead to real collaboration in addressing growing human challenges will be realized. As the two largest economies being led by people of good intent, we must lock arms to collaborate on issues like climate change, pandemic infectious disease response, terrorism, space exploration, medical breakthroughs, technology developments that make the planet safer and more harmonious, setting parameters to address the proliferation of fake news, and many others.

Our closer commercial ties, the opening of our markets to Chinese companies and their markets to our companies will fuel a decade of high growth and prosperity and will lift people in both countries. Our close diplomatic and strategic ties will help humans address daunting challenges for a more peaceful and more sustainable life on earth.

So let us go forth inspired by the possibility of working together to leave this world a better place for generations of humans to follow. Thank you very much.