Member of Council of Advisors, Boao Forum for Asia 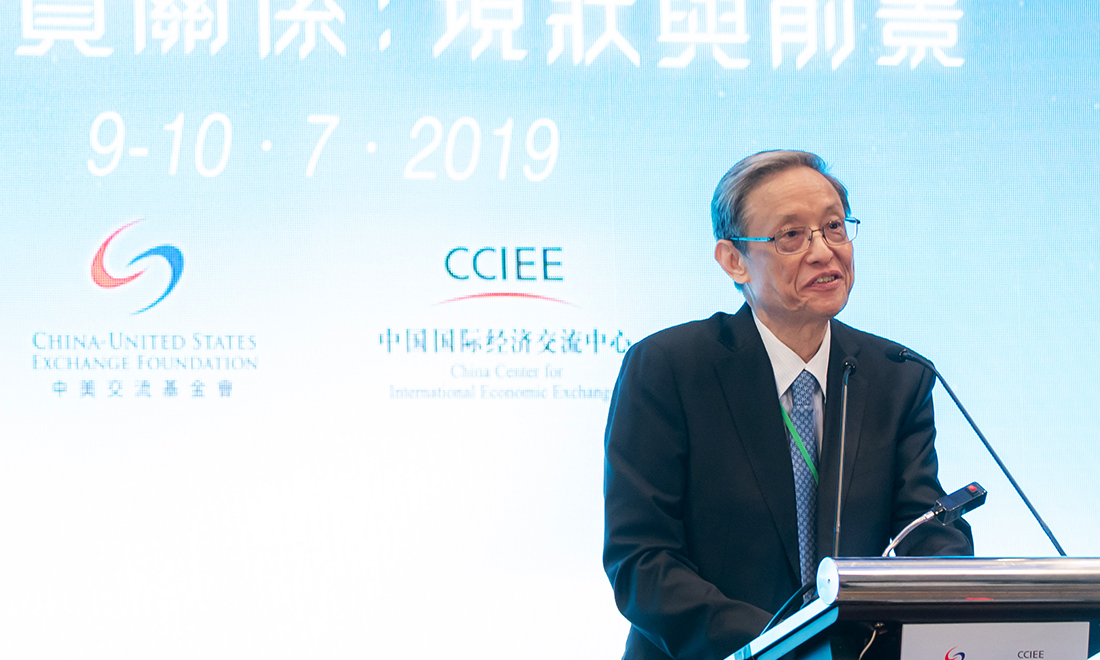 This year marks the 40th anniversary of the establishment of China-US diplomatic relations. For the past four decades, the bilateral relationship has weathered numerous ups and downs as the two countries keep pressing forward. Today, it has become the most important bilateral relationship in the world. How the two countries engage with each other is not only about the well-being of 1.7 billion people in China and America, but also about peace and stability for the whole world.

Confucius once said, “At forty, I had no doubts.” Yet the current situation of the China-US relations has raised some questions. Since late 2017, strategic rivalry between the two countries has been intensifying, and frictions in economy and trade, politics, culture, science and technology increasing. Many people couldn’t help but wonder what exactly is going on with the China-US relations? Is it true that the two countries have already stumbled into the “Thucydides Trap”, or even worse, into a “new cold war”? Only by a retrospection of history, can we find answers to how to sustain a healthy and stable China-US relationship for the next 40 years.

If we look back on the trajectory in the last 40 years, it is not difficult to realize that one of the most important lessons is cooperation leads to mutual benefit, while conflict puts everyone in harm’s way. Cooperation is the best option for both countries. There is a misconception that China policy espoused by the United States for the past 40 years has bankrupted, in the sense that China has not integrated into the US-led political and economic world order. In fact, international relations are based on common interests. The more mutual interests any given two countries share, the broader their cooperation base is, and the more solid their bilateral relations become. Forty years ago, it was mutual interests that brought about the establishment of China-US diplomatic relations. And forty years later, it is mutual interests again that help push forward this bilateral relationship. As globalization deepens, interdependence and intertwined interests have emerged as the most significant characteristic of the modern world. States must engage with one another in dialogue instead of confrontation, in cooperation instead of friction, in win-win instead of zero-sum game. Only by this way can nations better serve the fundamental interests of their own, and contribute to the betterment of the world at the same time.

After 40 years, the China-US relationship has long transformed into one community of shared interests, inextricably interwoven with each other. From 1978 when I was first posted at the China Liaison Office in the United States to 2005 when I was appointed PRC Ambassador to America, I was able to bear witness to the historical progress of an ever broadening of China-US cooperation scope, an ever multiplying of cooperation dimensions, and an ever growing of cooperation benefits. Whereas during the first years shortly after the establishment of diplomatic ties, bilateral trade volume was less than $2.5 billion, with the number of people exchange hovering in thousands; in 2005 when I started as an ambassador to the United States, bilateral trade volume reached $211.6 billion and people exchange increased to over two  million. In 2018, China-US trade volume went on to value at $633.5 billion, making the two countries the largest trading partner of each other. And people exchange during the same year more than doubled to 5.15 million. All these numbers show that it is not only necessary but also possible for the two countries to avoid falling into the so-called trap of conflict and confrontation, and during the process both China and the United States are able to achieve mutual promotion and mutual development.

Both countries need to think hard about how to address a lack of strategic mutual trust, a fundamental issue underlying today’s China-US relations. There is no such thing as “Thucydides Trap” in the world politics. Nevertheless, strategic miscalculation between major powers keeps popping up, a situation prone to leading to a vicious cycle, which in turn might result in the “self-fulfilling prophecy”. For some time, anti-China rhetoric within the American establishment have been on the rise. Some are deeply skeptical about China’s intentions. Believing China is bent on challenging or replacing US predominance, they advocate a US policy featuring containment of, “decoupling” from or even confrontation with China. Some of them even go as far as trumping such ideas as “clashes of civilizations” and “a new cold war”. This is utter strategic misjudgment, as well as wrong prescription for the woes in China-US relations. If we let such agitations fester, it will shake loose the foundation of China-US relationship, poison the atmosphere of bilateral relations, and even push China-US ties down into the “Thucydides Trap”.

“Harmony” lies at the core of the Chinese nation’s value system. This dictates that China will commit itself to a peaceful rise and uphold an opening strategy of mutual benefit and win-win. The fundamental strategic intention of China is to help its people lead a decent life, and, together with all nations in the world, construct a community of shared future for mankind. China is by no means a replica of the former Soviet Union. It will never follow down the beaten path of “power inevitably leading to hegemony”, for such a path will take us nowhere, nor is it welcome anywhere in the world. China will never become a second America, nor does it harbor ambitions of replacing it. Competition between China and the United States is bound to arise, but such competition should be constructive and rule-based. China’s development and prosperity present opportunities for the United States, and the same can be said the other way around. Both countries stand to benefit if we strengthen connectivity rather than decouple from each other. We should never allow bias and misjudgment to dictate the future of China-US relations.

Both countries need to address differences and disputes between themselves in a proper way. China and the United states stand in sharp contrast in terms of social structure, history and cultural tradition: whereas China is a socialist country led by the Chinese Communist Party, the United States is the world’s largest and most powerful capitalist nation; China boasts a civilization dating as far back as 5,000 years ago, while America is a relatively young nation with a history of some 200 years; American people are proud to claim themselves as “God’s Chosen People”, while the Chinese burn with a strong sense of national pride. The two countries approach issues from different perspectives, thus it is inevitable that differences and disputes arise. However, it is critical that we not allow these differences and disputes prevail. In the bilateral ties, there are much more mutual benefits than differences, much more cooperation than friction. We are obligated to prevent differences and disputes from dictating today’s China-US relations. It is critical to face up to and cope with these differences and frictions in a proper way, and to manage them constructively in the spirit of reciprocity and mutual respect.

Recently, the most prominent issue in the China-US relations is frictions in economy and trade. China has made it clear its stance in “White Paper: China’s Position on the China-US Economic and Trade Consultations”. Guests attending today’s forum are all benefiting from the economic and trade cooperation between China and the United States, and all of us understand that mutual benefit and win-win lie at the core of the China-US economic and trade relations. No winner emerges from a trade war. All disputes need to be settled through dialogue and consultation. That being said, all negotiations are bound by principles and bottom lines. China will never budge on issues of principle that bear a direct significance on national pride and core interests. On June 29, President Xi Jinping and President Donald Trump met on the sidelines of G20 summit in Osaka, Japan. The two sides have agreed to restart trade negotiations in the spirit of reciprocity and mutual respect. The Americans assured that new tariffs on Chinese imports will be suspended, and negotiators from the two countries will be tasked with working out the particulars. This move sent a positive signal to the global market and international community. Both China and the United States are willing to expand cooperation in economy and trade, and both countries are supposed to possess capabilities and wisdom of reaching a resolution acceptable to either party. The two countries need to implement what their leaders have agreed upon, move in the same direction, and manage to reach a trade deal as soon as possible. This would come as good news to both peoples and great assurances to the world at large.

Taiwan, Tibet, Xinjiang and South China Sea are issues concerning China’s sovereignty and territorial integrity, as well as the feelings of 1.4 billion Chinese people. On such matters, China has no room for any compromise or concession. The United States, with an eye to the overall bilateral relations and its own interests, should address these issues in a cautious and appropriate way, in order to prevent them from affecting and undermining the China-US relations.

People-to-people exchange is an important aspect of informing and shaping public opinions in the two countries. Recently, some American departments and agencies have set up unwarranted barriers against China-US cultural exchange, including visa revocations and prolonged reviews. This has hindered people exchange between the two countries. As a result, starting from July of 2018, the number of Chinese tourists visiting America has been experiencing a steady decline. Many American experts argue that America is over-reacting against the so-called “China threat”, and it might deteriorate into McCarthyism type of “Red Scare” in the 1940s and 1950s, which in turn harms American interests in the longer term. President Trump, after meeting with President Xi in Osaka, said America welcomes Chinese students studying in the States. Thus it is imperative that American departments and agencies follow through on the president’s positive remarks with concrete measures, listen to those rational voices in the two countries, and facilitate, not discourage people-to-people exchange between China and America.

As a witness to the 40 years of China-US relations, I have faith in the prospects of this bilateral relationship going forward. As long as the two sides stand firm on the right direction of no conflict, no confrontation, mutual respect and mutual benefit through cooperation, as long as the two side expand cooperation in the spirit of mutual benefit and win-win, as long as the two sides manage differences and disputes with mutual respect and are committed to promoting a coordinated, cooperative and stable China-US relationship, can this bilateral tie move forward for another 40 years, which will in turn bring more benefits to peoples of the two countries, as well as those from all across the world.

(Note: This is the unofficial translation of the speech, which was delivered in Chinese. Find the Chinese version HERE)