The following are excerpts of remarks by Wang Yang, Vice Premier of the State Council of the People’s Republic of China at the China-U.S. Business Luncheon on November 22, 2016 in Washington D.C. 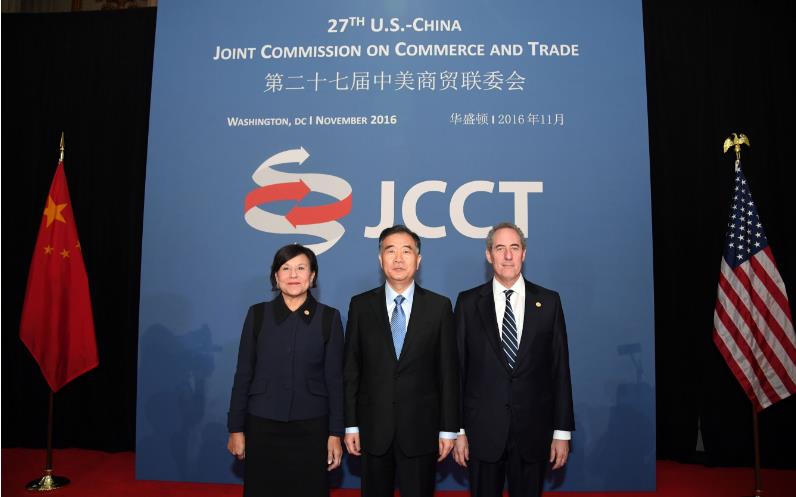 Joint Commission on Commerce and Trade (JCCT) is an over 30-years-old institutional arrangement, yet each session takes place with a different background and mission. The biggest background of this JCCT is the election of Mr. Trump as the new president. People are now all interested in the direction of the new US administration’s trade policy on China and the future of China-U.S. business cooperation. As for what actions the US will take, we will wait and see.

China is the largest trading partner of the US. Despite the lackluster growth in global trade from 2008 to 2015, China-US trade defied the downward trend and recorded an average annual growth of over 7%. Last year, the top four U.S. exports to China were airplane, soybean, automobile and integrated circuit. China imported 22% of U.S. cotton, 26% of Boeing airplanes and 56% of U.S. soybean. Exports of goods and services to China generated nearly 1 million jobs in the US.

The U.S. is also a big market for Chinese exports and in China-U.S. trade, China is on the surplus side. But I want to stress that many of China’s imports from the U.S. are high-end products which China cannot produce, and what we export to the U.S. are mostly products which the U.S., with no comparative advantage, no longer produces. The investment of Chinese companies in the US has rapidly increased, now reaching 42 American states, including New York, Illinois, Virginia, Massachusetts and California. Chinese investment has generated some 100,000 jobs for America. Generally speaking, China-U.S. economic relationship is highly complementary. The bond of the market has made us interconnected and indispensable to each other.

As our economic and trade ties grow closer, we also face growing differences and frictions. Sometimes, the more you care about the other side, the easier it is to get into quarrel. If there is no quarrel, it probably means a complete loss of faith in each other, and a breakup will not be far. In fact, since you are in the business world, you should know this better. Many cooperation deals were made after quarrels. As we face up to our differences and effectively resolve them, we find the strong driving force for China-U.S. economic cooperation. Now we have a host of bilateral mechanisms for managing differences. In the economic and trade field, we not only have old mechanisms like the JCCT and the Strategic and Economic Dialogue (S&ED), but also the new arrangement of routine telephone communication on economic affairs initiated last year. I have maintained hotline communication with Secretary Pritzker, Ambassador Froman and Secretary Lew. The topics of our conversation ranged from big issues like institutions and mechanisms in important economic areas to small issues like trade of specific products. To be honest, communication cannot solve all the problems, but it has enabled us to increase mutual trust and manage differences and created conditions for more cooperation.

China and the U.S., the two largest economies in the world, have both demonstrated strong momentum of growth, which has opened broad space for business cooperation. It is estimated that over the next five years, China will import $8 trillion of goods, utilize $600 billion of foreign investment, and make $750 billion of outward investment. Outbound Chinese tourists are also expected to reach $700 million. All these mean enormous business opportunities for companies around the globe, including American companies. To help others is to help oneself. This is an important part of China’s business culture. I am confident that, seeing a big emerging market like China, American government and companies will make the right choice.

As a matter of fact, the Chinese and American business communities have already made their choice. The China Business Environment Survey published by the US-China Business Council last month shows that nearly three quarters of the American companies surveyed are optimistic about the growth prospect of the Chinese economy; 90% of the companies have made profits in China; and nearly half of the companies are ready to increase investment in China. In the first three quarters of this year, the investment of US companies in China was up by 21.3%, while the direct investment made by Chinese companies in the non-financial sectors of the U.S. expanded by 1.8 folds. These figures may be more convincing than the interpretation of China-US economic relations by any politician or economist. In one word, China-US business cooperation is market driven, and its ultimate driving force comes from the people, from the business community. If China-U.S. business cooperation gets into serious trouble, it will not only damage the two economies but also add to the uncertainties of global economic recovery.

As two responsible major countries, we can only choose to cooperate.
You are all keen to understand the direction of China’s opening-up policy and its evolving business environment. To help you make better assessment, let me share with you three examples.

The first example is about opening-up. Not long after the 18th Communist Party of China (CPC) National Congress in 2012, we made the decision in July 2013 to conduct Bilateral Investment Treaty (BIT) negotiations with the U.S. based on the model of pre-establishment national treatment plus a negative list. And shortly thereafter we set up the first pilot free trade zone in Shanghai to explore the negative list-based foreign investment management system. The 190 special management measures of the 2013 negative list were cut down by 36% to 122 in the 2015 version. And in the latest revised offer to the U.S. in BIT negotiations, we have promised opening-up measures that are more favorable than those in pilot free trade zones in the banking, securities, insurance, telecommunications, culture, the Internet, automobiles and other sectors that are of interest to the U.S. Such progress can well prove that China is ready to open its market ever wider.

The second example is about IPR protection. After taking office in 2013, the new Chinese government has worked hard to streamline administration and delegate powers. Even with the abolition of multiple coordination mechanisms under the State Council, the leading group on fighting infringements and counterfeiting has been retained. Over the past three years and more, the leading group met 12 times to plan for relevant work. Accordingly, competent authorities carried out over 150 targeted campaigns, investigated and handled over one million criminal cases, and sentenced over 70,000 people. In September last year, China’s Ministry of Public Security and General Administration of Customs received Interpol’s global anti-counterfeiting award and the award for international cooperation on the investigation of IPR crimes. Acting on the decision on the establishment of IPR courts taken at the third plenary session of the 18th CPC Central Committee in November 2013, we opened the first ever IPR court in Beijing in 2014, followed by two more in Shanghai and Guangdong. By the end of last October, the three courts had handled close to 30,000 IPR infringement cases. Over 20% of the cases tried at the Beijing court were foreign-related. This proves that China’s business environment has been better regulated.

The third example is about transparency. Pursuant to the newly revised Legislation Law adopted in March last year, public comment must be sought for any draft law for at least 30 days, and the comments should be made public. This is the first time China has made public consultation a legal obligation of the legislature, which demonstrates the huge progress in legislation transparency in China. In fact, we have fully listened to the views of various sides, including American companies and relevant institutions, and incorporated their reasonable suggestions in making laws and regulations concerning cyber security and foreign NGO management and in introducing policies related to drug regulation and technology innovation. When US companies raised concern about the lack of clarity in the scope of key information infrastructure protection contained in one draft of the Cyber Security Law, the Chinese legislature accepted this and listed specific industries. And when some, including American companies, expressed different views on a provision of the draft overseas NGO law, namely, an overseas NGO is only allowed to set up one representative office in China, their views were accepted as well and the quota restriction was removed in the final version of the law. Facts clearly show that China’s policies and regulations have become more transparent and our business environment more business-friendly. In a word, we are taking big steps in the right direction.

President Xi Jinping has stressed many times that “China will not change its policy of utilizing foreign investment and protecting the legitimate rights and interests of foreign invested companies in China. Nor will we change our policy direction of providing better services for foreign companies to invest in China.” This is a solemn promise made by the top Chinese leader and the Chinese government. China would not have come this far in comprehensive national strength and people’s well-being had it not been for opening-up. Why would we want to give up this proven basic state policy? The Chinese people would not agree if we were to give it up.
Surely, China’s opening-up today is no longer about bringing in alone but is also about going global. And I believe governors in the U.S. will all welcome it if Chinese companies “select USA”. Otherwise, the governors would not welcome me with this luncheon, but rather stage a protesting assembly. The establishment of a China General Chamber of Commerce in the U.S. in itself reflects U.S. enthusiasm to encourage Chinese investment.

Cooperation is the best thing about human evolution. It explains why mankind can survive so many political, economic and natural crises in history. The remarkable progress China has made since reform and opening-up is also attributable to China’s cooperation with other countries, the U.S. included. Cooperation does not mean the total absence of competition. It is exactly the competition for interests that has created so many job opportunities for lawyers, accountants and economists, and has made cooperation all the more dynamic and exciting. Of course, competition for interests can often make people angry. The history of China-U.S. diplomatic relations over the past three decades and more proves that competition can be kept within reasonable scope and cooperation always leads to win-win outcomes. By working together, China and the US can do a lot of great things for both of us and the world at large.

China-U.S. BIT
printTweet
You might also like
Back to Top
CHINA US Focus 2018 China-United States Exchange Foundation. All rights reserved. Disclaimer