What If Chinese People Could Vote for the President of the United States?

It’s election season in the U.S., and that means daily bombardments of poll numbers. But what if we polled people in other countries? I recently took advantage of the following I have on Zhihu (China’s Quora clone) to do just that. Full disclaimer: my methodology was not scientific and my findings do not tell us anything about national trends. Zhihu’s 30 million users mostly come from China’s younger, urban, student, and professional demographic, which is a reflection of the non-random subset of Zhihuers who follow politics and voluntarily chose to participate in my poll.

Most people in China know little about foreign affairs other than what is filtered through the state-controlled media. The number of Chinese using software to evade censorship, however, is growing, and more and more and turning to non-state controlled platforms like Zhihu and Quora for news and information and to make their own voices heard. Given the importance of the United States and China bilateral relationship, it behooves us pay attention to what our candidates are saying about China, and what Chinese people in turn think of our candidates.

The first time I ran the poll I simply provided a list of candidates without context. Trump won 38% of the vote, Hillary Clinton 29%, Bernie Sanders 12%, and Jeb Bush 10%. Zhihuers pointed out “these results are biased since most of us Chinese have never heard of any of these people other than Trump and Clinton” (which in fact is not all that unlike the situation in the States). 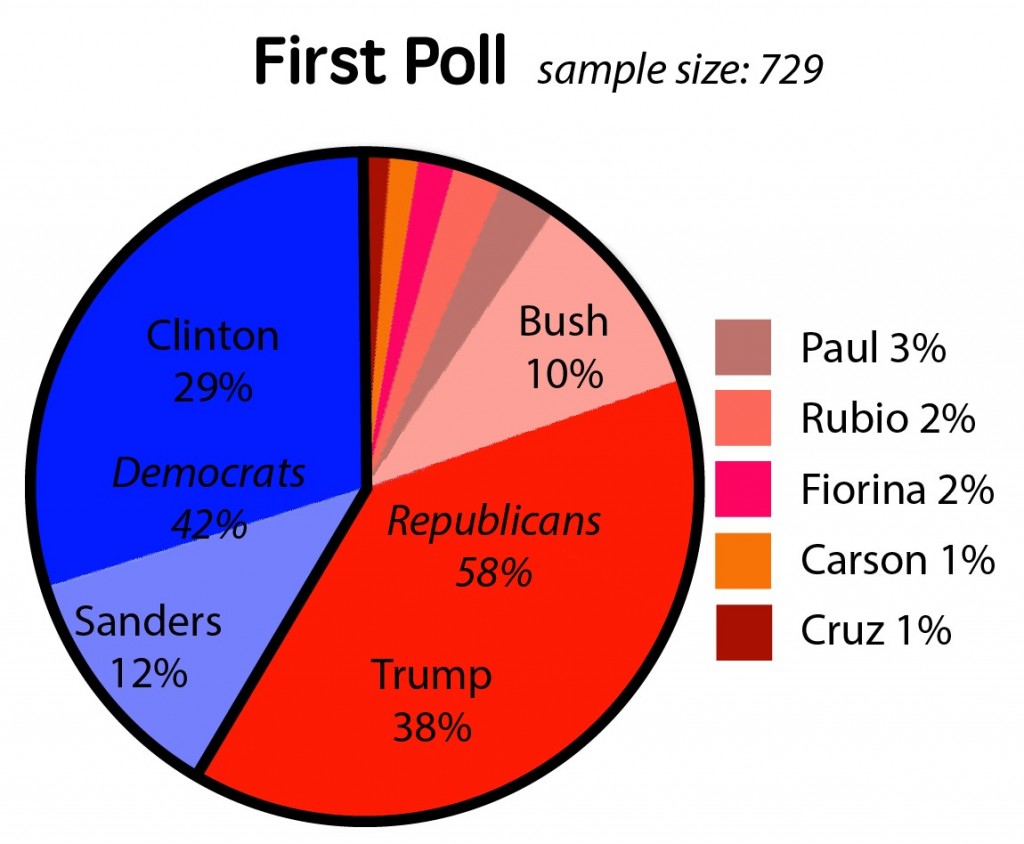 So I decided to run the poll again after presenting them with candidate bios and an infographic showing how they diverge on all the main issues. This is the kind of content I’m known for on Zhihu: articles, pictures, maps, and data that try to portray my country as it really is. I’ve learned how to stay within the boundaries of accepted speech on the Chinese internet. Chinese politics are strictly off-limits, but U.S. politics are fair game. I’ve found that I can regularly extrapolate opinions on the former through the lens of the latter (and often times they save me the hard work and do the extrapolating themselves).

Running the poll for the second time produced drastically different results (although I unfortunately can’t claim any direct cause-and-effect since the two respondent pools differed). This time around Democrats took 2/3 of the vote and Trump lost a significant share of his support to Clinton and Sanders. But I realized I was still missing part of the story when people wrote in asking me “which country’s shoes should I be standing in when I vote?” 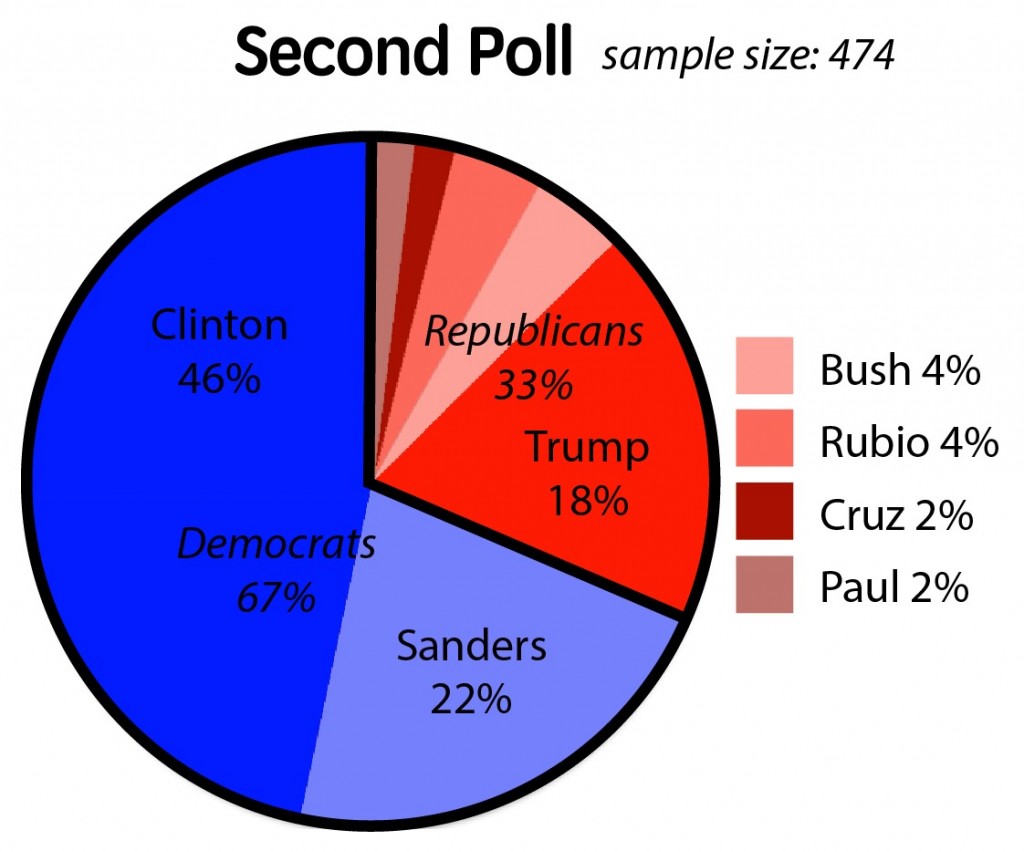 So I designed yet another poll, asking respondents to vote twice, first from the vantage point of China’s national interest, and then from their own personal vantage point. The two separate results from this third poll nearly mirrored the diverging results in the first and second polls, shedding light on the phenomenon of Trump’s popularity. When representing China, Zhihuers put Trump in the White House. Several explained matter-of-factly that were Trump elected “surely the U.S. was doomed, and therefore China would rise in its wake.” I get the feeling a lot of them are at least half-joking (after all in a U.S.-is-doomed scenario China wouldn’t be doing much better). There’s a sense that a lot in the Trump camp are more spectators to the “hot and noisy” circus than anything else. Also, putting on their Chinese nationalist hats, they’ve knocked off points for Hillary, blaming the whole Clinton brand for the 1999 Chinese embassy bombing in Belgrade. I was surprised to learn that a lot of them also believe that Hillary is the candidate most “tough on China,” which means I didn’t do a good enough job of introducing the Republican field and some of their candidates’ foreign policy stances.

When voting their own conscience, however, Hillary’s negatives evaporate and she runs the field, garnering admiration for her experience, acuity, and toughness. There’s a vocal feminist contingent on Zhihu, and while there’s not much optimism that China will see females at the top of government any time soon, the symbolism in a Hillary presidency is seen as advancing the fight for women elsewhere. Bernie Sanders did well in this poll, attracting support mainly for his campaign against wealth inequality, a serious issue in China as well, but also for his idiosyncratic charm (“Grandpa Bernie” is his Chinese nickname). Not to be forgotten, Jeb Bush has supporters in China, too, more so than Ted Cruz or Marco Rubio. Jeb’s older brother and father were both popular figures in the country, and he is seen as the best non-Trump Republican.

But I’m most interested in the 20% who still voted Trump in the personal conscience poll. I knew it wasn’t coming from the Chinese demographic counterpart to Trump’s base. Out-of-work Chinese factory workers aren’t well represented on Zhihu (they’re on the internet, just not this site), and I don’t imagine they’d be too keen on Trump’s proposed 45% tariff on Chinese goods. I decided to conduct follow-up interviews with these respondents to learn more about their thought process. Some were fans of The Apprentice, but a full half had never heard of Trump before. These guys (I tabulated the results by gender and found that Trump’s accolades were nearly all male) admire in Trump his alpha male billionaire’s braggadocio. They defend him as a “really successful businessman” who’s “being unfairly attacked by a media and public that’s too PC”. They acknowledge the carnivalesque nature of his shtick, but it doesn’t trouble them (maybe because it’s so thoroughly the opposite of their own leaders’ stiff public personas).

I went through a list of Trump’s signature issues and asked them which ones they agreed with. All vehemently rejected Trump’s claim that “climate change is a hoax invented by the Chinese,” but some rejoined that “he doesn’t really believe that; it’s just what he has to say to get elected.” The aforementioned tariff is also a non-starter. It’s clear as day that it’s Trump’s denunciation of political correctness and his calls to expel illegal immigrants and ban Muslims from the U.S. that appeal most to his Zhihu fan base.

I learned last year when addressing a separate question on Trump’s Muslim ban that fear and intolerance of Islam is unfortunately commonplace on Zhihu. I’d written previously that Zhihu is a relatively civilized community for the Chinese internet, and it still is, compared to the general Baidu boards, or “Iron Blood Net,” a hotbed of China’s nationalistic “angry youth.” Other liberal Zhihuers have confirmed my suspicious that rightwing views are getting louder, bemoaning that “on Zhihu, hating Muslims is now politically correct”. Islamaphobia appears to be a force that unites nationalists, populists, and nativists from the United States to Europe to China. Those in China listen to what candidates like Trump and Marine Le Pen are saying on the national stage and complain that that their own leaders are “too gutless to do anything about China’s own Muslim problem.”

The “anti-PC” wave sweeping Trump’s America is a hot topic on Zhihu as well, where rival factions debate current issues and the “PC” label gets thrown around a lot, usually derogatively. Many Chinese studying in the U.S. detest affirmative action, which they see as discrimination against Asian students such as themselves. So when Donald Trump claims, “I love China”, the feeling is at least partially mutual.