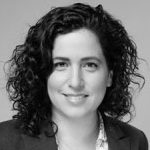 Hadas Peled is a doctoral candidate at Tsinghua University School of Law and the Co.-Editor in Chief of the Tsinghua China Law Review (Vol. 8.1 & 8.2).
Back to Top