The China-Israel Financial Protocol and the Road and Belt Initiative 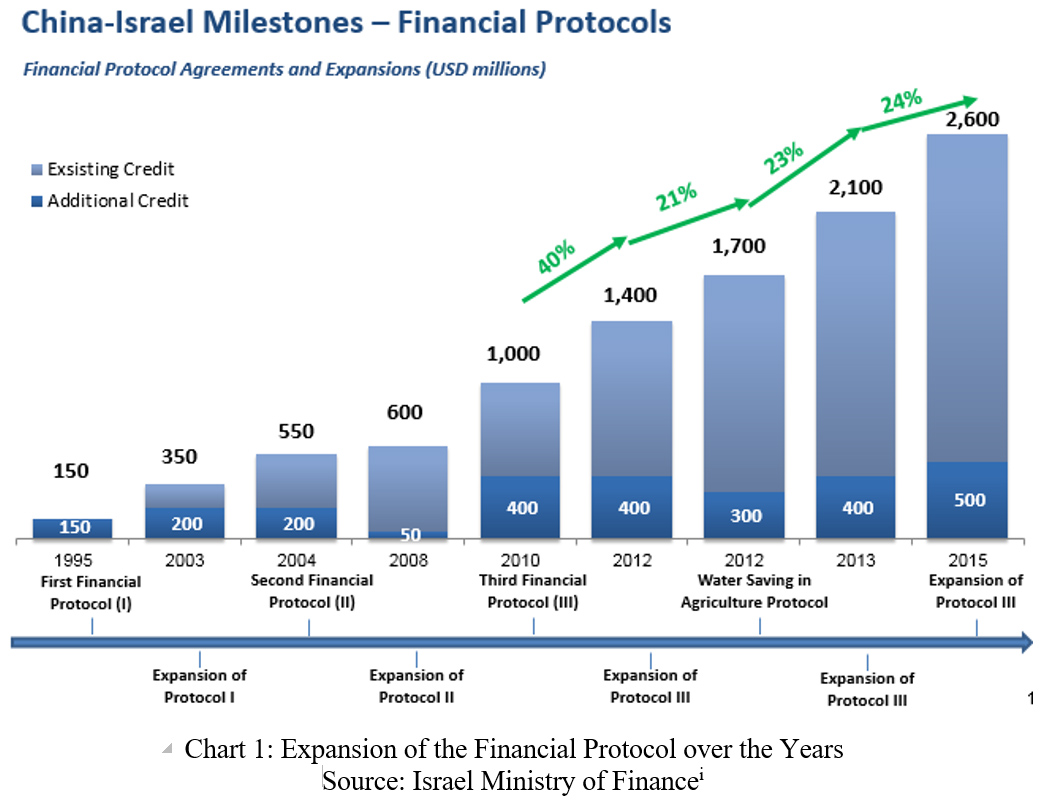 As shown in the chart above, the main growth of the credit provided by the Financial Protocol followed the global financial crisis in 2008. This should be understood in the context of the overall development trend in the relationship between China and Israel. During the global economic crisis that showed its severe effects in 2007-2008, the economies of both Israel and China countries were relatively only moderately affected.[i] This mutual stability allowed for a shift toward greater cooperation and recognition of the importance of a relationship between the two nations.
The scheme of the Financial Protocol is both simple and effective, as illustrated in the flowchart below. The framework of the Financial Protocol is governed by an agreement between China's and Israel's Ministry of Finance. Israeli and Chinese banks provide long-term loans to projects approved in advance by both ministries. All leading banks in China and Israel are parties to this scheme. The Chinese end-users and Israeli end-users/suppliers agree independently on the project scope and consideration. Following such understanding and its basic approval by both ministries, the parties can finalize the financial terms with the sponsoring banks. This financial scheme is insured by an Israeli state-owned insurance agency, the Israeli Foreign National Trade Insurance Corporation Ltd. (ASHRA), thus reducing credit costs and risks. Such a credit arrangement allows Israeli exporters to offer their Chinese counter-parts competitive prices. The government support of these projects, in fact, reduces the costs to all parties involved.

Over the years, the Financial Protocol facilitated projects for advancing technologies in key industries like communications, medicine and health care, water treatment, clean energy, agro-tech, and education. Interestingly, the projects were implemented in rural places in China rather than in first tier locations. China’s implementation of these programs in more remote locations is an effort by China to work toward closing the still prevalent economic and technological gaps within the country. The Financial Protocol allows Israeli exporters to reach-out to remote areas in China and offer advanced products and services, while maintaining their competitive price, since the support of the government reduces the risks associated with international trade.
The Road and Belt Initiative is often discussed by foreign commentators in the context of projects initiated by China in other countries; however, Road and Belt Initiative projects are available and promoted within China as well. [i] The key principles of the Road and Belt Initiative believes in stressing the role of the market when promoting projects based on a “win-win,” mutual interest basis, removing trade barriers, and deepening cooperation in agriculture, seawater desalination, environmental protection industries, solar power, renewable energy sources, and many other industries. As mentioned above, these industries are already included as part of the Financial Protocol. As this research shows, the Financial Protocol sets a good example for the implementation of the Road and Belt Initiative although it is not specifically included within the scope of Road and Belt diplomacy.
*I am thankful for the support and friendship of Mr. Ofer Peleg, Minister of Finance, Embassy of Israel, Beijing, who provided me with valuable research material that enabled this study.
[1]Mr. Yali Rothenberg, Senior Deputy Accountant General, Ministry of Finance, Presentation Delivered at the Event for the 20 Years Anniversary for the Financial Protocol, at files with the author
[i] The State Council of the People's Republic of China, Action Plan on the Road and Belt Initiative, March 28, 2016, in particular, Section VI "China's Region in Pursuing Opening Up" available at: http://english.gov.cn/archive/publications/2015/03/30/content_281475080249035.htm
[i]IMF Country Report No. 12/69, Israel: Financial System Stability Assessment (April, 2012), available at: https://www.imf.org/external/pubs/ft/scr/2012/cr1269.pdf; IMF Country Report, China Economic Outlook (February, 2012), available at: https://www.imf.org/external/country/CHN/rr/2012/020612.pdf
China-Middle East RelationsOne Belt One Road
printTweet
You might also like
Back to Top
CHINA US Focus 2018 China-United States Exchange Foundation. All rights reserved. Disclaimer