U.S. president Barack Obama kicked off his four-day trip to Africa on July 24, starting from Kenya, his father’s homeland, followed by Ethiopia, where the African Union is headquartered. The first African-American president, he also becomes the first sitting U.S. president to visit the East African countries. 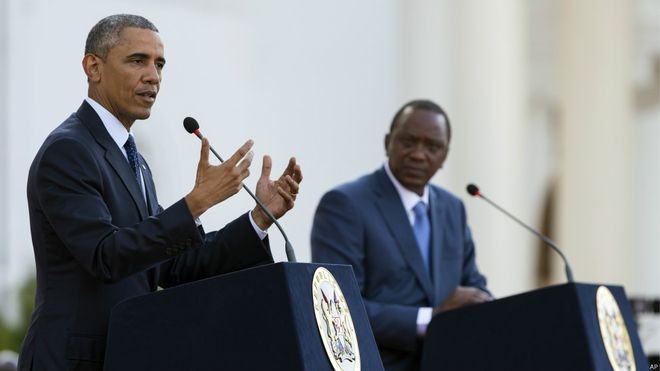 The visit has three highlights. First, seek security collaboration. As international efforts have been poured into the so-called “unstable Arc” to assist local countries with their anti-terrorism campaign, Kenya is one of the eagerest to grab more security aid from the United States. In Ethiopia, besides anti-terrorism, the topic expanded to end the crisis in South Sudan and prevent the country falling into a civil war. Second, boost economic ties. Obama’s participation of the annual Global Entrepreneurship Summit, a U.S.-backed initiative that brings together young business leaders from all over the world, aims to encourage entrepreneurship and innovation in Africa. The summit gave rise to tangible economic cooperation, such as the agreement between SkyPower, the utility-scale solar-energy developer, and the Kenyan Ministry of Energy and Petroleum. Third, conduct “value diplomacy”. In Kenya, Obama openly challenged Kenya’s human-rights record, called for the government to empower women and girls as equal citizens, and lectured President Kenyatta on gay rights. Obama then encouraged Ethiopia to take steps to promote good governance and democracy during his later trip to the country.

People argue that Obama’s African trip again proved his change of policy towards the continent in his second term. It’s true that he is focusing more on Africa when he is eager to secure his diplomatic legacy. Yet the resources he spent are not enough, due to the relatively unimportance of Africa in the U.S. foreign policy and thus leading to the lack of clear and coherent African strategy.

Economically speaking, despite its emphasis on promoting trade and investment in Africa, the U.S. failed to sign any single new bilateral investment treaty or free-trade agreement with any African country. The only highlight may be Obama’s Power Africa Initiative. But not much Power Africa budget has been allocated towards off-grid energy solutions, which means off-grid projects and renewable energy solutions have not been the priority of the initiative as was claimed. Moreover, the U.S. Export-Import Bank’s charter expired on June 30 and new loans could not be made, greatly hampering American companies who sought financing for potential power projects in Africa. As for security collaboration, the U.S. speeds up its limited cooperation with African countries on fighting against terrorism and safeguarding the regional stability, underscoring an approach of burden sharing. Obama understands the risks if the U.S. deeply involves itself in the battle against terrorism. Neither the U.S. troops nor his political standing could bear the fallout should he fail. To avoid the direct intervention, the U.S. adopts a “leading from behind” tactic, supporting the regional and sub-regional organizations that lead military actions.

China and the U.S. in Africa

Besides seeking his legacy, the China factor also plays its role in changing Obama’s African policy. Since the establishment of the Forum on China-Africa Cooperation (FOCAC) in 2000, the China-Africa economic and trade cooperation has entered a new stage, and China surpassed the U.S. as Africa’s largest trading partner in 2009. China-Africa trade at US$222 billion in 2014 is about three times greater than US-Africa trade. Facing the great gap and a widely accepted view that Africa is a “promising land”, Obama could not stand idle. One of the major intentions of Obama’s trip is to strengthen U.S.-Africa economic relations and compete with China. In addition, the U.S. strategic circle is always concerned that Africa is the weakest link in its global strategy and its global leadership system will collapse first in the continent. To hedge China’s influence in Africa seems much more urgent than ever.

The current competition between the U.S. and China in Africa is two-fold. First, America’s diplomatic priorities in Africa highly overlap those of China. Ethiopia and Kenya, the two destinations of Obama’s visit, happen to be China’s focus in Africa. Ethiopia has enjoyed close high-level relationship with China. President Kenyatta has chosen China and Russia as the destinations of his first overseas visit since taking office. Second, China and the U.S. are competing over rules or standards in Africa. China never interferes with domestic politics of African countries and respects development paths that African countries choose. China conducts its development aid policies in Africa with no political and human-rights conditions attached, which has won recognition and appreciation from African countries for China’s development ideas and model. The U.S., on the contrary, has been long conducting “value diplomacy” in Africa, promoting good governance, democracy and human rights standards and its development model. The U.S. blames China for undermining its value system simply for not doing the same. Under this context, the U.S. tends to lead the media to politicize the economic issues and portray the development issues as ideology-inspired. Prior to his visit, President Obama said to the media that China’s investment into Africa is seeking raw materials and the U.S. should place itself in Africa to strengthen the values that the U.S. cares about.

Nonetheless, the competition should not be perceived from the perspective of a “a “zero-sum” game with a Cold War mentality, which is rooted in fierce geopolitical rivalry. Generally speaking, the interest divergences of China and the U.S. are controllable and the risks are not high. On one hand, Africa is not the priority in the U.S. global strategy, and the U.S. has to invest limited resources due to its strategic contraction. On the other hand, the two parties have a common interest in safeguarding Africa’s security and stability, nurturing Africa’s market, which breeds possibilities for cooperation. More importantly, African countries will try to strike a balance among China, the U.S. and other external powers. For the U.S., the best way to strengthen its influence and promote the international rule is to focus on facilitating its relations with African countries rather than treating China as a competitor.

If we change the perspective, the possibilities of fierce competition between China and the U.S. in Africa will be diminished. The two countries can explore possibilities to realize bilateral security cooperation in Africa as a point of departure, with common efforts to maintain peace and stability in the continent and set up a stage for pushing forward a new type of major-country relations.