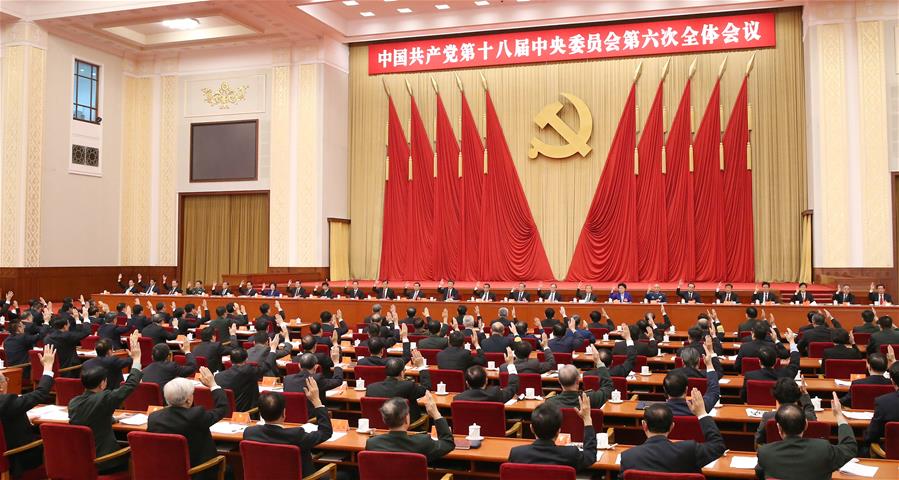 The Sixth Plenary Session of the 18th Communist Party of China (CPC) Central Committee is held in Beijing, capital of China, from Oct. 24 to 27, 2016. (Xinhua/Pang Xinglei)

The sudden and unceremonious dismissal of Chongqing’s party chief and Politburo member Sun Zhengcai is the latest illustration of the precarious political security of high-ranking members of the Chinese party-state. His replacement, Chen Min’er, the former party chief of Guizhou province, is a protégé of President Xi Jinping. This unusual personnel shuffle on the eve of the 19th Congress of the Chinese Communist Party (CCP) has only fueled speculation about the intensifying political jockeying in the corridors of power in Beijing.

Sun’s departure has attracted much attention because, as a Politburo member under the age of 55, he was seen as a likely candidate for promotion to the Politburo Standing Committee at this fall’s 19th Congress. This elevation would have made him a designated successor for one of the two top positions of the Chinese leadership (either the general secretary of the party or the premier of the State Council). Although such speculation was not groundless, Sun’s political future was always in doubt because he is not a loyalist of President Xi. Now that Sun appears to be headed for early retirement or worse, the question on most people’s minds is what is going to happen to the party’s succession plan when it convenes its 19th Congress a few months from now.

If the CCP’s top leadership decides to eliminate any uncertainty over who will succeed President Xi, the General Secretary of the party, it will nominate a clear successor at the 19th Congress. In 2007, the party picked Xi as the successor to then-President Hu Jintao.

However, it is doubtful whether the succession issue will be resolved as cleanly and decisively this time. After the elimination of Sun as a candidate, only one Politburo member under the age of 55 is left – the party chief of Guangdong, Hu Chunhua. In the interest of complete clarity, the party would simultaneously promote two rising stars of 55 or younger into the Politburo Standing Committee to fill the top two slots, thus leaving no doubt that an orderly succession will occur. Even if Mr. Hu Chunhua should be elevated to the Politburo Standing Committee at the 19th Congress, it is unclear which of the top two positions he will eventually fill, if at all. What makes the promotion of two younger leaders into the Politburo Standing Committee unlikely this fall is that there is not another rising political star among the provincial party chiefs younger than 55.

In addition, after gaining the coveted designation of the “core leader” at the party’s plenum last fall, President Xi has apparently achieved total dominance at the top and can thus decide the succession issue almost single-handedly. The circumstances this time are totally different from those in 2007, when rival factions inside the party were more or less evenly matched and had to negotiate a delicate compromise that resulted in the designation of Xi as the future general secretary.

The combination of Xi’s political supremacy and lack of strong candidates meeting all the eligibility requirements means that the succession issue will not be resolved with any clarity at the 19th Congress. Xi can make a plausible case to his colleagues that this issue should be deferred to the 20th Congress.

Such a development will greatly strengthen Xi’s hand in his second term. The appointment of a clear successor would have made him a lame duck five years ahead of time. The postponement of such a decision until 2022 leaves the door open for a third term, which is actually not prohibited under the CCP’s charter. The only office occupied by Xi subject to term limit is the presidency (officially called the chairman of the People’s Republic).

Besides the succession issue, the 19th Congress will pick new Politburo Standing Committee members to replace those hitting the informal age limit of 68. Should the age limit be strictly enforced, then five of the seven incumbents will have to step down. There is much uncertainty over whether the informal age limit will be enforced at the 19th Congress. The chief reason is the future of Wang Qishan, the anti-corruption chief and a Xi ally. At the age of 69, Wang is only slightly over the limit. Keeping him on the Politburo Standing Committee would breach the age limit, but making him retire would deprive Xi of a powerful and capable right-hand man. At the moment, the odds favor Wang. The only unknown is which new portfolio he will get.

Identifying the other front-runners to fill the four vacancies left on the Politburo Standing Committee is much harder. Two of the current Politburo members appear to be safe bets. They are Li Zhanshu, Xi’s chief of staff, and Han Zheng, Shanghai’s party chief who was mayor of Shanghai while Xi served as the city’s party chief. Picking the last two would be much tougher because Xi and his colleagues on the current Politburo Standing Committee will need to balance competence, experience, and factional ties.

Besides cementing his dominance of the Politburo Standing Committee, Xi will almost certainly appoint a large number of his political protégés, such as the newly promoted party chiefs of Beijing and Chongqing, into the Politburo. So when the personnel appointments are announced at the conclusion of the 19th Congress, few will doubt that Xi has achieved complete consolidation of power.

The most telling signal of this achievement may not be just the promotion of his loyalists to the top echelon of the party’s leadership. In all likelihood, the 19th Congress will laud Xi for his theoretical contribution to the party. His predecessors, Jiang Zemin and Hu Jintao, were each rewarded with such recognition. Jiang received credit for his “important thought of three represents” (the essence of his theory was the broadening of the party’s social base to include private entrepreneurs). Hu’s theoretical contribution was “scientific outlook of development,” which stressed a balanced approach to economic development.

On the eve of the 19th Congress, we can sense an ongoing movement to glorify Xi’s theoretical contributions. Phrases such as “Xi Jinping Thought” or even “Xi Jinpingism” have appeared in the official press or speeches by high-ranking officials. So we should not be surprised when the 19th Congress officially endorses such lofty designations.

The real challenge for Xi lies after the curtain falls on the 19th Congress. Having acquired all the accoutrements of power, he will have to deliver real results in his second term. For those concerned about China’s future, that is worth watching far more than the highly orchestrated proceedings of the party’s gathering this fall.

The 19th CPC Party CongressChina’s LeadershipChina PolicyXi Jinping
printTweet
You might also like
Back to Top
CHINA US Focus 2022 China-United States Exchange Foundation. All rights reserved.