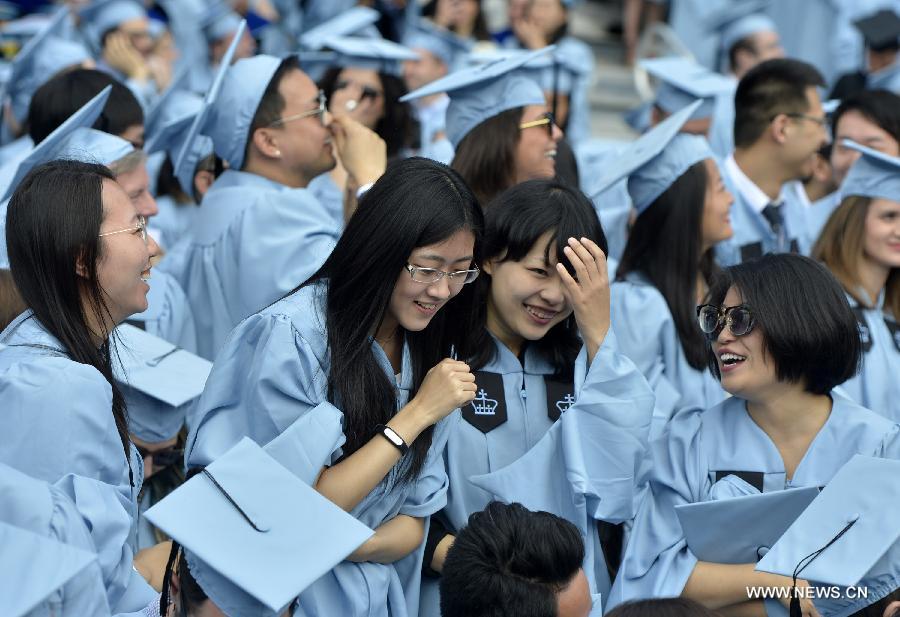 This piece originally appeared on MacroPolo.

Another shoe has dropped in the Trump administration’s ongoing tussle with China, and this time it has hit Chinese students in the United States.

This week U.S. embassies and consulates reportedly received instructions to tighten visa restrictions on Chinese students attending U.S. graduate programs in advanced technical fields such as robotics, aviation, and high-tech manufacturing. Those are all industries singled out for government support in “Made in China 2025,” the Chinese industrial policy at the center of the current trade (re: technology) war between the United States and China.

Although the restrictions don’t constitute an outright ban on Chinese students in these degree programs, they will still likely lead to substantial declines in enrollment. Applying to American universities from China is a complex, costly, and time-consuming process. If applicants know that their visa could be taken away any year by an increasingly erratic U.S. government that has become suspicious of Chinese students, many will choose to simply stay in China. This is a case where perceptions may matter as much as reality.

Some commentators have downplayed the impact of the new regulations—after all, annual renewals were standard operating procedure until 2014. But I believe the current order will have a noticeable chilling effect, and could presage further moves against Chinese graduate students, such as limits on the number of visas issued or possibly even an outright ban.

Instant reactions to the proposed restrictions were polarized. Senator Marco Rubio hailed the decision as “another great move!” on Twitter, describing Chinese student visas as “weapons” in China’s campaign to “cheat and steal” its way to world dominance. On the opposite end, former Mexican ambassador to China Jorge Guarjado’s widely-retweeted reaction predicted the restrictions will “come back and bite the U.S. in the ass.” He argued that Chinese innovators would take their talents elsewhere, warning that this marked the “beginning of the end of U.S. tech supremacy.”

Rubio’s reaction reflected a highly politicized DC climate, while Guarjado’s take channeled the Silicon Valley orthodoxy that openness is always better for innovation. Neither of these is quite on the mark.

I personally know dozens of Chinese graduate students who are neither “cheating” nor “stealing” for their home country—they’re trying to learn and contribute at the cutting edge of their fields globally. On the Silicon Valley predisposition toward openness, if the rise of the Chinese internet giants has taught us anything, it’s that technological upgrading is as much about gathering a critical mass of engineers, entrepreneurs, and money as it is about cultural norms like openness.

With that in mind, which country stands to gain more—or lose less—from the proposed regulations? It’s a question that reflects the zero-sum approach of the Trump Administration to international relations, and its concerted efforts to slow down China’s technological catch-up in key industries. There are a number of issues with that zero-sum approach: U.S. and Chinese tech ecosystems are deeply intertwined and interdependent, and human flourishing will require that these two superpowers avoid a dangerous “arms race” mentality in powerful technologies like artificial intelligence (AI). But as a matter of understanding the actions of current policymakers, it’s worth asking the same zero-sum question that appears to guide their thinking: who “loses” when the United States takes in fewer Chinese graduate students?

This seems like an unqualified win for the United States. America attracted the brightest young minds from China, trained them at U.S. universities, and benefited from their skills (and tax dollars) in the domestic economy for decades to come.

But a lot has changed in recent years. Chinese student enrollment has boomed: the United States hosted roughly 130,000 Chinese graduate students during the 2016-2017 academic year. At large public institutions like the University of California, roughly one-quarter of all engineering and computer science graduate students are from China.

Yet these students now often spend just a couple years working in the United States before returning to China for the long term. There isn’t comprehensive data on return rates of recent graduates, but a mix of broader indicators and anecdotal evidence point to a potential sea change.

In 2017, a record-setting 480,000 Chinese students who had studied abroad returned home. China’s Ministry of Education estimated that by 2016, around 70% to 80% of Chinese students abroad eventually returned to live in China. That’s roughly in-line with the results of a Purdue University survey of students’ post-graduation plans: 57% planned to return to China after a few years in the United States, 9% wanted to return to China immediately, and only 13% hoped to stay in the United States indefinitely (21% said they didn’t know).

That reversal has been particularly pronounced in Silicon Valley. When I began reporting on China-Silicon Valley connections in 2013, it was rare to find a Chinese engineer who had given up a plush job at Google or Facebook to found a startup in China. But in the past five years the tide has turned, and Chinese technologists are returning home in droves. Top Beijing startups are now frequently staffed by students who graduated from elite U.S. computer science programs and worked several years at places like LinkedIn or Uber.

Those shifting return rates reflect both a pull (back to China) and a push (away from the United States). Many graduates are “pulled” home by the energy pulsing through China’s technology ecosystem: the rise of WeChat, Alibaba’s record-breaking public listing, and world-class Chinese AI researchers.

At the same time, the difficulty in obtaining H-1B visas is “pushing” Chinese graduates to leave America. The most popular visa for high-skill foreign citizens who have found a job in the United States, H-1B visas are capped at 85,000 each year, with 20,000 of those set aside for holders of advanced degrees. When applications exceed those caps, visas are given out by lottery, and a large rise in H-1B applications between 2009 and 2016 meant Chinese graduates’ odds of “winning the lottery” for a work visa have steadily dropped.

Even though H-1B applications have now declined for 2017 and 2018—meaning each applicant’s odds of getting one goes up—U.S. immigration authorities have nonetheless begun rejecting greater numbers of lottery winners as insufficiently qualified. The new restrictions prompted one rejected Chinese applicant—an entrepreneur with law degrees from China and Oxford and an MBA from Stanford—to ask in a New York Times op-ed, “Is Anyone Good Enough for an H-1B Visa?”

Impact of the New Restrictions

In this environment, what would declining Chinese student enrollment mean for the relative advantage in the targeted industries? The answer to that question comes down to weighing two counter-balancing impacts on Chinese innovation. Will China lose more from missing out on the knowledge its returning PhDs would have gained from training in the United States? Or will China gain more by holding onto its most promising PhDs who now won’t go to the United States in the first place?

On the one hand, keeping China’s best minds locked up in their home country just isn’t as limiting on them as it used to be. In a field like AI, Tsinghua and Peking universities are often ranked among the top five institutions in the world for research. Chinese researchers have become so important to the field that major conferences have been rescheduled so they don’t conflict with Chinese New Year. In addition, academic researchers’ commitment to publishing their results—often instantly and openly online—is dramatically shrinking the international knowledge gap in technical fields.

And yet, there’s a good reason why so many of China’s best students choose to study at U.S. universities: they still believe America is the best place for them to develop world-class skills. In this sense, Chinese students continue to “vote with their feet,” both in choosing to attend American schools and in heading back to China to continue their careers.

There’s no clear answer yet to which of the above forces will dominate. While I lean toward the idea that China holding onto its top graduates will, on balance, accelerate its technological progress, this is far from a settled question. If the United States had implemented the visa restrictions ten years ago—when the country admitted many Chinese PhDs who would stay, but far fewer who would return home—it’s entirely possible that would have slowed China’s technological catch-up in fields like AI. At this point, however, that ship has already sailed in many industries: Chinese domestic talent has reached a threshold where “indigenous innovation” and access to international research can keep the country at the cutting edge.

The current approach of restricting visas works entirely through incurring relative losses: keeping out Chinese engineering PhDs will hurt some U.S. companies, but the hope is that it will hurt China more.

But there is a different approach that had been proposed, one that was in fact endorsed by former presidential candidates Mitt Romney, Hillary Clinton and, on some occasions, Donald Trump. That is, making it easier for highly skilled Chinese workers to remain in the United States. American politicians frequently suggest “stapling a green card” to the diploma of every PhD in a STEM (science, technology, engineering, math) field.

Staple-a-green-card is a policy with its heart in the right place (and a nice piece of political imagery), but in this particular instance such an approach could also backfire. I’ve spoken to multiple Chinese PhDs in Silicon Valley who told me they stayed in the United States until they got a green card. Once they had the security of knowing they could return to the United States any time for the next ten years, they headed back home for better opportunities.

But there might be a third way: the United States could “staple an H-1B” to those diplomas, allowing foreign graduate students to skip the suspense of the lottery system. That would give them permission to work in the United States, but also an incentive to do so for several years (the path from an H-1B to a green card is often around six years for a Chinese citizen).

Since undermining the “pull” of China’s exciting startup ecosystem is largely out of the U.S.’ control, it should at least focus on moderating the “push” forces that is within its control. This will allow the United States to compete on its own strengths: cleaner air, a gentler education system for the kids, a more creative and critical thinking pedagogy, and stronger personal legal protections.

In a world where the United States no longer has a monopoly on high-tech innovation or talent, that may be the best we can hope for.