Is the BRIC Future on Track?

In the early 2000s, Goldman Sachs projected that the four largest emerging economies – Brazil, Russia, India and China, or the BRICs – would surpass the major advanced economies by the early 2030s.

At the time, the US economy was some 2.5 times bigger than that of China but amid the worst asset-bubble burst since the Great Depression. Japan, the world's second-largest economy, was coping with a second lost decade. Chancellor Merkel’s Germany and President Sarkozy’s France still led the ailing Europe, where the global recession would soon morph into a series of sovereign debt crises. In Brazil, President Lula drove a dramatic growth catch-up while reducing historic income polarization. In Manmohan Singh’s India, growth was accelerating. In Russia, President Putin had multiplied the size of the economy by more than five-fold in one decade, thanks to rising energy prices.

But where are the BRICs today?

To gain a better understanding of what has happened in the past two decades, let’s compare Goldman Sachs’s original BRIC projections in the 2000s, which rested on the economic development in the 1980s and 1990s, with the actual BRIC prospects today, which are the net effect of the past two decades.

What Goldman Sachs projected was a dramatic expansion of China, whose GDP was anticipated to grow more than 14-fold between 2000 and 2025. At the same time, India’s economy would increase by almost tenfold and was projected to grow relatively faster than China’s in the late 2010s. Brazil was expected to expand fivefold, and Russia more than tenfold. In light of the fact that, in the same time period, the US, the largest advanced economy, was projected to expand more than twofold; these were stunning projections indicating solid catch-up growth in the largest emerging economies.

So what happened? Here’s the bottom line: if peaceful conditions prevail and trade protectionism can be kept in check, China could deliver more than expected, while India remains on track as well. However, the potential of Brazil and Russia, respectively, has been undermined by geopolitics (Figure 1). 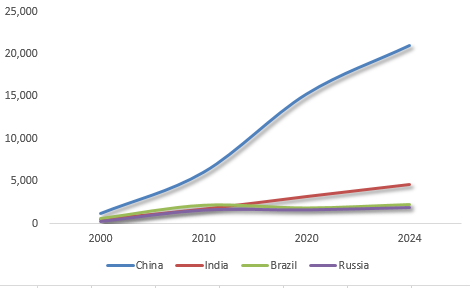 After China joined the World Trade Organization (WTO) in 2001, its economic expansion intensified dramatically, fueled by the export-led growth model. Since the early 2010s, that model has been morphing into consumption and innovation. By the mid-2020s – again, assuming peaceful conditions and managed trade tensions - China’s economy could expand more than 17 times, relative to its size in 2000. It is set to surpass the size of the US economy in the 2030s, which may be the key to Obama’s military pivot to Asia in the early 2010s and to Trump’s tariff wars more recently.

While India’s growth trajectory has periodically slipped, it has been pushed harder by Prime Minister Narendra Modi, despite recent growth pains. If things go right, India’s economy could expand the projected tenfold by the mid-2020s. New Delhi is engaged in a cautious balancing act between economic development and rising prosperity, which is what the country needs, and geopolitics and rearmament, which is what Washington would prefer.

Under President Lula’s leadership, Brazil’s GDP grew even faster than expected by the original BRIC projection. But since the mid-2010s, because of the contested impeachment of President Rousseff, and particularly the imprisonment of Lula, Brazil’s growth trajectory has plunged. The geopolitical soft coup, which critics claim paved the way to the radical right’s President Bolsonaro and the dreams of a new military dictatorship, could result in a lost decade. By the mid-2020s, Brazil’s GDP may reach the level where it first was at the end of the Lula era in the early 2010s.

Instead of being almost a fifth of the US GDP by the mid-2020s, Brazil’s economy may prove to be less than 9 percent of the US’ (more than 50 percent smaller than originally projected). The dreams of tens of millions of Brazilians of a better future have been undermined.

In Russia, President Putin was able to reverse the economy’s drastic fall in the 1990s and restore the growth trajectory in the 2000s, when Russian economic prospects were in line with BRIC projections. As Stephen F. Cohen has argued, Washington initiated a “new Cold War” against Russia before the 2008 global crisis. Due to the continued softness in oil prices and particularly the still ongoing sanctions, the Russian economy could have been almost a fifth of the U.S. economy by 2025. Thanks to the new Cold War, the Russian economy could prove to be less than a tenth of the US GDP in the period.

The Russian economy could increase by six to seven times, but it cannot deliver its full potential.

The peak of the advanced economies’ global power was in the 1980s and ‘90s. In 2000, the economies of the major advanced nations of the “West,” as reflected by the G6, were still almost ten times bigger than the BRICs. But increasing debt, military overstretch, and aging populations have hit the advanced West hard.

In 2010, the BRICs accounted for more than a third of the G6; in the mid-2020s, that figure will be two-thirds of the G6. The original Goldman Sachs projections suggested the BRICs would catch up with the G6 by the late 2020s. Thanks to geopolitical interventions, the actual convergence is likely to take 5-10 years longer (Figure 2). 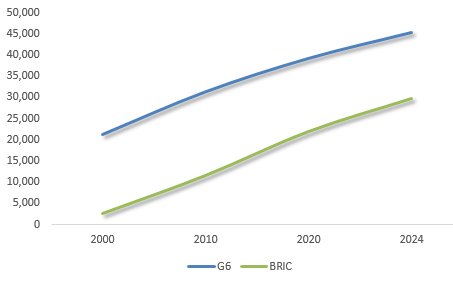 Of course, if the six G6 countries were to be compared with the six largest emerging economies – not just the four BRICs – Indonesia and Mexico could be added to the group. In that case, convergence would happen a few years earlier.

As the International Monetary Fund reported in 2007, the large emerging economies have fueled global economic prospects since the 2000s. Recent efforts to undermine their economic potential reflect efforts at destabilization and regime change, critics argue. In the absence of a significant policy U-turn, collateral damage is spreading.

As the US pivots to Asia is promoting competition rather than cooperation, the economic promise of the Asian Century is threatened. The Trump tariff wars have played a key role in the plunge of world trade, the fall of world investment, and rising migration barriers, all of which have caused the number of the globally displaced to soar to more than 70 million, far higher than it was after World War II. At the same time, global economic prospects continue to diminish in a way that could push major advanced economies into secular stagnation earlier than anticipated.

Spearheading the world’s largest emerging and developing economies, China, India, Brazil, and Russia together pace global economic prospects. And as they go, the world economy will move with it.

BRICS
printTweet
You might also like
Back to Top
CHINA US Focus 2022 China-United States Exchange Foundation. All rights reserved.