Changing Values Reflected in the Word Use of Chinese Authors

Chinese people have held collectivistic values such as duty, giving to other people, social belonging, and obedience for thousands of years. In recent decades, China has experienced extremely rapid system-wide social change, thereby requiring its people to meet great challenges to their traditional values and life styles. According to Greenfield’s (2009) theory of social change and human development, materialistic and individualistic values (e.g., sense of agency, importance of choice) are adapted to a relatively wealthy, urbanized, high tech, commercial environment with a high level of formal education; collectivistic values are adapted to a relatively poor, rural, low technology, subsistence-based environment with a low level of formal education.

In a big-data study of the words used in 277,189 Chinese-language books published between 1970 and 2008, we found evidence of rising individualism and materialism in concert with growing urbanism, increasing wealth and higher levels of formal education (Zeng & Greenfield, 2015).

This study utilized the Google Ngram Viewer, a tool for massive culture-wide content analysis, to count word frequencies from millions of digitized books in the Google Books database. This method is based on the premise that books are a tangible and public representation of culture. Using the Google Ngram Viewer, Greenfield (2013) found that, in concert with urbanization and correlated increases in wealth, the frequency of words reflecting individualistic and materialistic values increased from 1800 to 2000 in both the U.S. and the U.K., while those reflecting collectivistic values declined.

In the study of Chinese values, we selected 16 words that represent important values in Chinese society throughout or at different time points during the last four decades, with half of them representing traditional collectivistic values and the other half representing individualistic and materialistic values. Where applicable to China, Greenfield’s (2013) investigation of U.S. and British books supplied words. Five of the 16 words had been used in the U.S. and British study: “Choose” and “get” indexed individualistic and materialistic values respectively; “obliged,” “give,” and “obedience” indexed collectivistic values. Sources for the remaining five words indexing collectivistic values (“assign,” “communal,” “effort,” “help,” and “sacrifice,”) lie in Chinese cultural and social traditions (e.g, Confucianism). Sources for the remaining six words indexing individualistic values (“compete,” “private,” “autonomy,” “talent,” “innovation,“ and “fair”) lie in values hypothesized to be adaptive in the new China, organized around a market economy.

As an example of the contrasting pairs of words, “assign” and “compete,” are of special significance in Chinese society. As is shown in Figure1, when the society began to switch to a market economy in the 1970s, “compete” began its upward trajectory. The frequency of “assign” also kept increasing until society finished the transition; during the cultural revolution and the transitional period, jobs and housing were assigned to people by the government. Around 1990, the crossover point of the two lines, there was an increasing variety and quantity of housing and work, resulting from the productivity boom and labor diversity in a market economy, so jobs and housing were no longer assigned; instead individuals needed to compete for them. 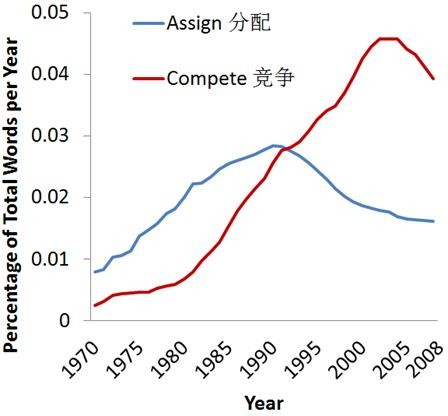 As another example, we employed “give” and “get” to index the contrast between contributing to the welfare of other people and obtaining something for oneself. The frequency of “get” shows a nine-fold increase, whereas the frequency of “give” barely rises (Figure 2). Nineteen-eighty-nine is the point at which the crossover takes place, with “get” becoming more than twice as frequent as “give” by 2008. 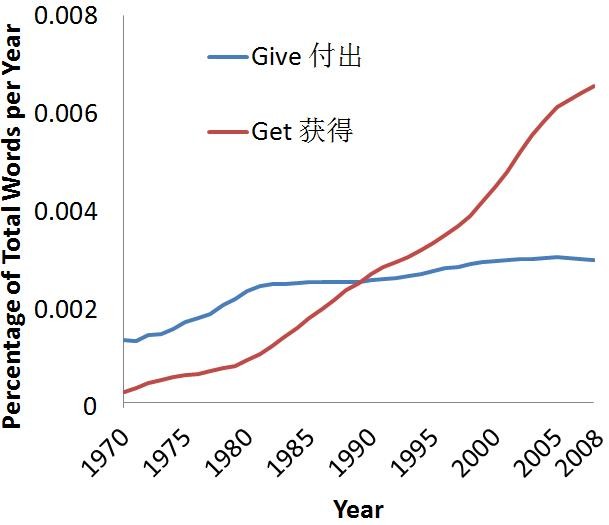 Furthermore, high and positive correlations were found between the frequencies of words representing individualistic and materialistic values (“choose”, “compete”, “get”, “private”, “autonomy”, “talent” and “innovation”) and three ecological indicators from the World Bank: urban population, household consumption per capita (in constant 2005 US$), and tertiary school enrollment. On the other hand, most but not all collectivistic words ( “communal”, “obedience”, “effort ”, “help” and “sacrifice”) showed significant negative correlations with these three sociodeographic indicators, as predicted by Greenfield’s theory.

The public is interested in the question why some of the words (e.g., “obliged”, “give”) slightly increased their frequency, while most words indexing collectivistic values declined in frequency in the Chinese corpus over time. This is in sharp contrast to the United States, in which the frequency of “obliged” and “give” declined from 1800 to 2000 with the rise of a predominantly urban society (Greenfield, 2013).

There may be many reasons; however, the fact that China is currently at the middle stage of urbanization, in that half the population lives a materially modern life with more personal wealth in urban areas, while the other half still lives a rural life with little personal wealth should be taken into account. We see the increasing popularity of individualistic values that are encouraged in a market economy; we also see reactions to rising individualism in the form of smaller increases in traditional collectivistic values that have been deeply rooted in Chinese culture over thousands of years.

In fact, cultural evolution never proceeds fast, simply, or clearly. Thirty-nine years is quite a short moment for value shifts, even in comparison to 200 years in Greenfield’s (2013) study of the value shifts in the U.S. and U. K. Focusing on the period from 1970 to 2008, which contains the Cultural Revolution (1966-1976) and subsequent Economic Reform (1978 to now), this study shows what may be one of the steepest turning points in the long, zigzag course of China’s social and value development.

As China is entering a “new normal” for its economy, which means slower economic development and deeper levels of change in other aspects of society, the competition between individualistic values and collectivistic values is likely to continue for some time. In this period of time, considering the importance of public voices online, the words used by Chinese writers online should be studied. They will provide us with another useful window into value change in China.

China’s Social Reform Chinese Culture
printTweet
You might also like
Back to Top
CHINA US Focus 2021 China-United States Exchange Foundation. All rights reserved.