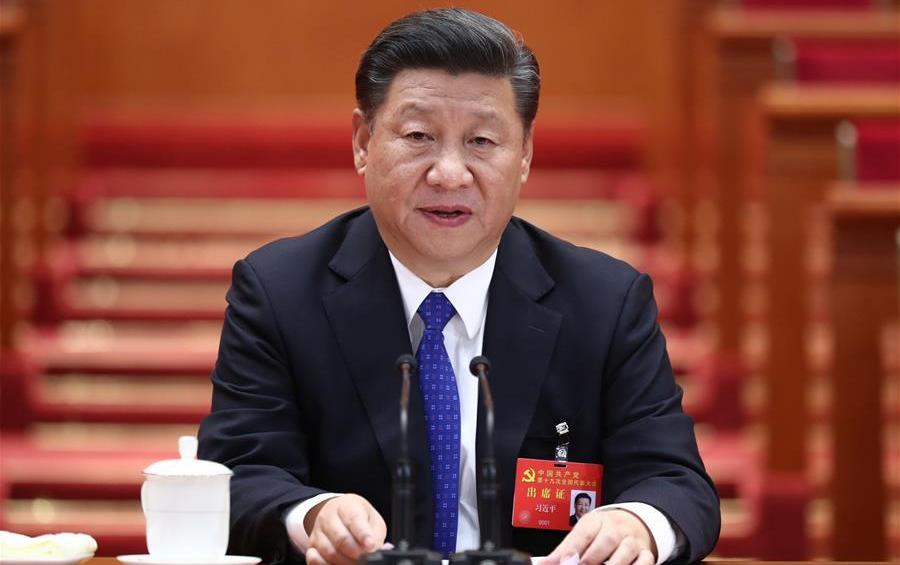 China’s quinquennial Communist Party congresses are that rare event where ritual and dogma combine with introspection and strategy. The 19th National Congress, which began on October 18, is no exception.

Notwithstanding the suspense over potential changes in Party leadership, which typically occur at the end of the meeting, President Xi Jinping’s political report, delivered on the opening day, was a high-impact event. Significantly, it says as much about the Party as it does about Xi. As Alice Miller, a leading Sinologist at Stanford’s Hoover Institution, emphasizes, the report was carefully crafted over a one-year period to convey the consensus of the Party’s highest organ, the 205-member Central Committee.

Three conclusions from Xi’s address are particularly important. For starters, the ideological underpinnings of “Xi Jinping Thought” have been raised to the same lofty level as those of “Mao Zedong Thought,” effectively elevating Xi over his three predecessors – Hu Jintao, Jiang Zemin, and even the revered Deng Xiaoping. Much has been written about Xi’s consolidation of power since he was appointed General Secretary in November 2012. But this elevation makes it official. After only five years in office, the Party leadership has anointed Xi as one of modern China’s two greatest historic figures.

Second, the political report speaks with great confidence about a China that has now entered a “New Era.” But by underscoring the Chinese adage that the “…last leg of a journey just marks the halfway point,” Xi sketched an even more ambitious future.

China’s sights are now set on two goals – completing the task of building the so-called moderately prosperous society by 2035, and then establishing its position as a Great Power by 2050. Unlike China’s goal-setting exercises in the past, there are no quantitative targets attached to these “twin centenary goals” (which roughly align with the Party’s founding in 1921 and the establishment of the People’s Republic of China in 1949). They celebrate the long-awaited national rejuvenation that Xi has dubbed the China Dream.

The third point is perhaps the most intriguing. This is couched in the form of China’s “principal contradiction” – a Marxist concept that serves as an admission of a fundamental problem requiring resolution. The principal contradiction, while typically elliptical and ambiguous, frames a rich discussion of risks and opportunities, strategy and tactics, reforms and governance – all of which will shape China’s prospects for the foreseeable future.

The big news is that, under Xi’s leadership, the Party has revised its principal contradiction for the first time since 1981. Whereas the contradiction had previously been framed as a tradeoff between the needs of the people and China’s “backward social production,” it is now viewed as a tension between “unbalanced and inadequate development” and the “people’s ever-growing needs for a better life.”

This restatement of the principal contradiction has not emerged from thin air. It clearly signals a far-reaching change in national perspective – from that of a poor developing country to that of an increasingly prosperous society focused on becoming a Great Power. It is also consistent with the critique of former Premier Wen Jiabao, who in March 2007 famously warned of a Chinese economy that was becoming increasingly “unstable, unbalanced, uncoordinated, and [ultimately] unsustainable.”

Over the past ten years, two five-year plans – the 12th, enacted in 2011, and the 13th, enacted in 2016 – plus a major set of reforms adopted at the so-called Third Plenum in 2013, have aimed to resolve China’s persistent and worrisome imbalances. Xi’s political report doesn’t alter the main thrust of those efforts. The real significance is that rebalancing is now enshrined within the Party’s ideological underpinnings. It is a foundational pillar of Xi Jinping Thought.

The political report’s focus on China’s principal contradiction also raises important questions about what still may be missing from the Party’s long-term strategy. Three “secondary contradictions” are especially striking on the economic front.

First, there is ongoing tension between the role of the state and that of markets in guiding resource allocation. This was a glaring contradiction of the 2013 Third Plenum reforms, which focused on the seemingly inconsistent combination of a “decisive role” for markets and steadfast support for state ownership.

The Party has long believed that these two features of economic life are compatible – the so-called blended economy with Chinese characteristics. Xi’s political report praises the mixed ownership model and also aspires to an economy led by great firms with unmatched global competitive prowess. But it glosses over the thorny issue of state-owned enterprise reform that may be required to resolve this contradiction and avoid the Japanese “zombie” problem of a chronic debt overhang.

Second, there is the tension between supply and demand. Consistent with other recent pronouncements of senior Chinese officials, the political report leaves little doubt that supply-side structural reforms are now the highest priority of economic policymakers. The related emphasis on productivity, innovation, pruning excess capacity, and moving up the value chain in manufacturing and services are underscored as key building blocks of this effort.

At the same time, the report de-emphasizes consumer spending and services – now buried deep in the list of priorities for a modernized economy. Yet focusing on supply without paying equal attention to the foundations of aggregate demand is a puzzling and potentially worrisome disconnect.

A final secondary tension can be found in the contrast between the path and the destination. Notwithstanding all the self-congratulatory flourishes in Xi’s political report, there is good reason to believe that the Chinese economy is only in the early stages of its long-heralded structural transformation. Its services sector is growing rapidly, but is still embryonic, accounting for just 52% of GDP. And household consumption, which is also growing rapidly, is still less than 40% of GDP.

China may well be on a path to a New Normal or a New Era. But the final destination remains far down the road, with many contradictions to be resolved during the journey.