As RMB’s Role Grows, Could the U.S. be Left Behind? 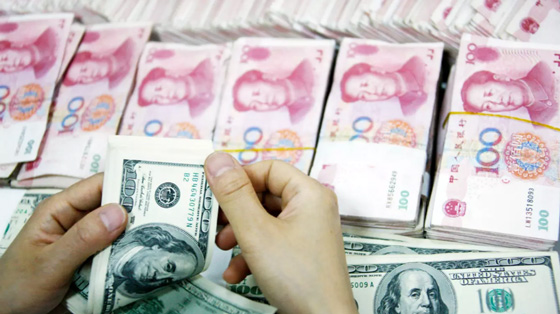 The renminbi did not become fully convertible even for current-account transactions until 1996, and the Chinese government did not allow it to be used for trade invoicing prior to 2009. China’s soaring monetary and financial influence since then is reflected in burgeoning offshore renminbi currency and bond trading in Europe as well as Asia. Swap arrangements for renminbi trade settlement with 30 countries and regions had been entered into by 2014 and companies like Korea’s Samsung and France’s Alstom have adopted renminbi payment settlement in their Chinese subsidiaries. The United States’ participation in renminbi internationalization remains conspicuous by its absence, however, notwithstanding that the People's Republic of China is not only its second-largest trading partner but also its largest creditor.
The Bank for International Settlements data revealed that the renminbi’s share in global currency turnover rose from 1% in 2010 to 2% in 2013 and 4% in 2016. Although obviously well behind the dollar’s dominant 88% share, this nevertheless reflects spectacular growth over a short period of time and the renminbi was already the eighth-most-traded currency in the world by 2016. The renminbi’s inclusion in the IMF’s special drawing rights basket of currencies will only further boost its appeal as a settlement currency. Indeed, the renminbi’s initial basket weight of 11% puts it ahead of the pound sterling and Japanese yen and behind only the euro and U.S. dollar. Its placement ahead of the Japanese yen could itself be interpreted as pricing in an expanded future role for the renminbi, given that the yen’s current share in global currency turnover today (22% in 2016) is much higher.
There is already speculation that at some point the renminbi could even supplant the dollar’s role as the numeraire for international commodity trading and such a shift would be akin to the dollar’s own replacement of the sterling as international reserve currency after the Second World War. The renminbi has already begun to find a place among the reserve holdings of foreign central banks, a development fueled not only by China’s growing economic strength but also the relative weakness of the euro. The dollar’s role remains supported by its position as the primary “flight to safety” currency, at least for now.
Major prior steps in the internationalization of China’s currency include the establishment of an offshore renminbi market in Hong Kong in July 2010, the November 2014 Shanghai-Hong Kong Stock Connect Program, and the December 2016 Shenzhen-Hong Kong Stock Connect Program. Renminbi-based transactions in Hong Kong exploded after the offshore market was formally established and the renminbi has also been increasingly displacing Hong Kong foreign currency holdings of dollars and euros. Meanwhile, direct investment flows between the two markets were facilitated by the more recent Stock Connect programs. Looking beyond East Asia, China has been Australia’s most important export market since 2009 and companies like Australia's Fortescue Metal Group have begun transacting in renminbi. Further financial liberalization is needed in order for the renminbi to realize its potential, however. Recent currency weakness has been accompanied by declining Chinese overseas direct investment and such direct investment was down almost 40% in December 2016 relative to the prior year. It is imperative that the Chinese authorities continue to loosen capital controls rather than retightening them.
The substantial scope for expanding the renminbi’s external role remains evident in the major inroads it has already made outside Asia. London, in particular, has become the most important external renminbi center beyond Hong Kong, overtaking Singapore in renminbi clearing volumes in 2016. There were more than 95 renminbi-denominated bond issues listed on the London Stock Exchange in 2016, raising approximately $6 billion in aggregate. A potentially major additional step is currently under consideration in the form of a feasibility study for a new Shanghai-London Stock Connect Program that would, for the first time, provide European investors with direct access to mainland Chinese stocks. Nor is London the only European renminbi hub. Frankfurt’s China Europe International Exchange was launched in November 2015 as a joint venture between the Shanghai Stock Exchange, Deutsche Börse and China Financial Futures Exchange. Luxembourg also has a heavy concentration of renminbi-denominated funds.
Another element in renminbi internationalization concerns growing ties between China and the other BRICS nations of Brazil, Russia, India, and South Africa. The BRICS group, which has been moving away from the use of third-party currencies like the U.S. dollar and the euro in international trade settlement, added formal ties in 2015 via their New Development Bank and Contingent Reserve Arrangement. Although the UK’s Brexit vote of June 2016 was widely seen as damaging the prospects for the euro, this may present a more unified BRICS group with an opportunity to benefit from a weakened European Union. Interestingly, the BRICS stock markets all fell significantly less than the -4.7% average global benchmark decline on the day after the UK referendum. Among the small group of countries enjoying positive abnormal returns on June 24, 2016, the two top performers were both part of the BRICS group – with Brazil enjoying an abnormal return of 5.5% and Russia 5.3%.
Even as much of the world becomes better positioned to take advantage of the dragon’s might and power in line with the old Chinese proverb, the United States has done little more than repeatedly debate whether or not China should be branded a “currency manipulator.” This charge is itself hardly supported by data on China’s current-account surplus, which declined to a rather modest 2.1% of Chinese GDP in 2016. It is still quite possible that congressional concerns with both the level of Chinese exports and penetration of the U.S. market by Chinese firms will provoke protectionist policies under the Trump administration. On the other hand, the potential mutual gains from engaging more positively with China should be abundantly clear to President Trump himself, given that the Industrial and Commercial Bank of China represents the Trump Tower’s biggest source of revenue – serving as its largest tenant and paying more per square foot than any other major office tenant in the building.

Ironically, at the very time that growing Chinese influences on other nations are enhancing economic interdependence and connectedness, the United States seems intent on more isolationist strategies, as reflected by the retreat from international agreements like the Trans-Pacific Partnership. Such actions only open the door further to China, including the potential for China playing a dominant role in the fledgling Regional Comprehensive Economic Partnership. The RCEP covers the 10 members of the Southeast Asian group ASEAN plus China, Australia, India, Japan, New Zealand and South Korea. There is every possibility that a U.S.-led Trans-Pacific Partnership could be effectively replaced by a China-led RCEP, which would represent a regional trade bloc covering near 27% of global trade. Given how far China’s monetary reach has extended already, the challenge to U.S. leadership certainly seems to be already underway. The United States must be careful not to be left out in the cold.

RMBRCEPGlobal GovernanceWorld EconomyChina’s Economy
printTweet
You might also like
Back to Top
CHINA US Focus 2018 China-United States Exchange Foundation. All rights reserved. Disclaimer