China-U.S. Strategic and Economic Dialogue: Time to Move Beyond the South China Sea?

Territorial disputes in the South China Sea are set to overshadow the eighth round of the annually-held China-U.S. Strategic and Economic Dialogue (S&ED) set to take place from June 5th through June 7th in Beijing, based on remarks by officials from both countries. 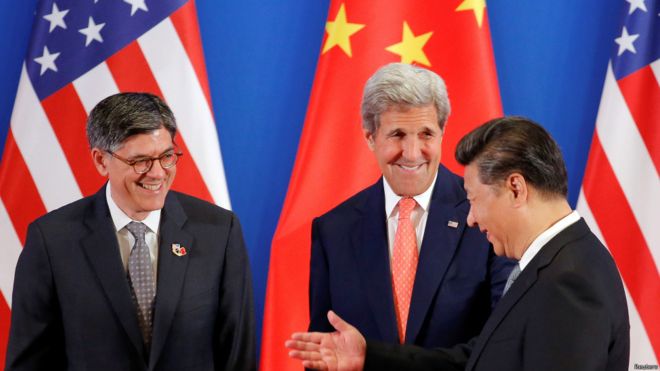 At the dialogue, China purportedly intends to “pressure Washington over maritime issues (…) the United States’ increasing military presence in the South China Sea is among China’s major concerns,” the state-run China Daily reported. “China hopes the United States would honor its commitment of not taking sides and fix its stand according to what is right or wrong, not according to allies,” Chinese Assistant Foreign Minister Zheng Zeguang said this week ahead of the dialogue.

Similarly, during the meeting the United States is expected to show “concerns with Chinese behavior in the South China Sea,” and “is likely to take issue with China on the alleged militarization of the South China Sea,” Daniel Russel, the U.S. State Department’s Assistant Secretary for East Asian and Pacific Affairs said during a press briefing on May 31st. U.S. Secretary of Defense Ashton Carter recently used a harsher tone when he said that Chinese actions are “contrary to international law” and that China may soon find itself behind “a Great Wall of self-isolation.”

Tensions in the South China Sea between the two countries have indeed been on the rise of late.  This May, two Chinese fighter jets flew dangerously close to a U.S. EP-3 Aries signals reconnaissance aircraft, an encounter the United States called a “dangerous intercept.” This came days after the United States Navy conducted its third freedom of navigation operation (FONOP) in the South China Sea since China started building artificial land features in the disputed Spratly Islands. The FONOP consisted of the guided-missile destroyer USS William P. Lawrence sailing within 12 nautical miles of Fiery Cross Reef, on which China is constructing a 3,000 meter airstrip for military aircraft.

For the United States and its allies, China in the South China Sea has been behaving contrary to customary international law and the United Nations Convention on the Law of the Sea (UNCLOS). Indeed, China has engaged in a continuous effort to create legal ambiguity over its territorial claims in the South China Sea paired with so-called gray zone coercion—the use of China Coast Guard (CCG) and maritime militia vessels to establish facts on the ground in the surrounding water while avoiding open military conflict and U.S. intervention.

It is thus unsurprising that the Permanent Court of Arbitration in The Hague is likely to rule in favor of the Philippines’ legal assertions in the South China Sea. China, however, is expected to disregard the ruling and will continue building military sites in disputed waters, perhaps supported by a number of high-level visits of Chinese officials to some of the occupied features in the South China Sea, in addition to possibly announcing the establishment of a so-called Air Defense Identification Zone (ADIZ) over contested territories. Beijing will almost certainly not compromise on its ambiguous “nine-dash line” claiming nearly all of the South China Sea anytime soon.

Nevertheless, U.S. officials have been at pain downplaying the spillover effects of the tensions in the South China Sea to other areas prior to the kickoff of the S&ED next week. “I certainly haven’t found—and I lead a number of these dialogues—that there’s any real spillover from the South China Sea type of thing,” said U.S. State Department Under Secretary for Economic Growth, Energy, and the Environment, Catherine A. Novelli, during a special briefing this week.

“I think that one of the real accomplishments of the Obama Administration with regard to China has been the creation of a relationship that can handle both significant friction and global if not galactic-scale cooperation,” according to Daniel Russel. “And that has been one of the secrets of the ability of the U.S. and China to deal with and to manage problem areas without coming to blows and without developing the kind of strategic rivalry that creates an absolute Cold War, zero-sum dynamic,” he added.

A Chinese Foreign Ministry spokesperson has also expressed China’s desire to “strengthen communication and mutual trust, manage and control disputes, expand cooperation, and move forward the new type of major-country relationship between China and the United States” during the upcoming S&ED, rather than dwelling on disagreements. This is to be expected, and there is some truth to State Department officials’ assertions that the impact has been minimal on, for instance, the economic and climate change S&ED agenda. The S&ED remains an important communications channel and seismograph to gauge overall relations between both countries. It also provides a platform to move forward joint initiatives from the previous S&ED on, for example, implementing the near-complete ban on ivory imports.

Yet, like the cyber espionage issue, the South China tensions have vicariously affected the overall bilateral relationship beyond the S&ED by creating a climate of mistrust and tensions amplified by the media and forcing policy makers’ hands on both sides. The reality is that the South China Sea has become one of the major issues in China-U.S. strategic relations. The position that policy makers take on the South China Sea disputes is used as a character screen to separate Panda-huggers (doves) from dragon-slayers (hawks) when it comes to formulating defense policy in response to China’s rise in the international system. It has become a projection screen for latent and blatant concerns over the rise to the top of an authoritarian and powerful state in the global system.

South China Sea tensions are merely seen as a symptom of a larger geopolitical power shift from the West to the East. Part of that power shift is China’s effort to slowly undermine the existing rule-based order, while gradually pushing the United States out of the Asia-Pacific region. As a consequence, Washington sees it as its duty to stand up to China to ensure regional allies and partners that the United States will not be dislodged from the region that easily. Countering China’s expansion in the South China Sea is therefore seen as the United States’ 21st century’s “Munich Moment.” Appeasing China, while it is openly challenging the existing international rule-based order, will merely encourage bolder Chinese actions elsewhere: Appeasement makes the aggressor only more aggressive.

Nevertheless, it seems unlikely that the United States will gain or lose much credibility no matter how tough of a line the United States would take during the S&ED. The United States’ options have been and will be limited by its official stance, which states that it does not take a position on the territorial disputes. Despite all of its rhetoric, the United States will not risk escalating the conflict, and China has also signaled no stomach for an open confrontation. The slogan ‘Mourir pour Woody Island’ has a distinct surreal ring to it and neither Beijing nor Washington will likely shift its current stance on the issue with both emphasizing a peaceful solution to the territorial disputes in the South China Sea.

The United States, however, lacks that leverage in the South China Sea unless a major policy shift occurs. On the one hand, the United States choosing to downgrade or not raise the issue at the S&ED could certainly make regional allies and partners—most notably Vietnam and the Philippines—doubt U.S. commitment and credibility. It could be interpreted as acquiescence to China’s dubious legal interpretation. On the other hand, bold U.S. actions could also make Vietnam and the Philippines less willing to compromise and further increase tensions.

Perhaps, it is also important to highlight the question over the proportionality of the issue in comparison to other national security issues equally or more important to both China and the United States—e.g., cybersecurity, North Korea, counter-terrorism and climate change etc.—which are under danger of being insufficiently addressed because of the mistrust that the South China Sea territorial disputes can cast over the meeting’s agenda, despite assurances from both sides that this will not be the case. The South China Sea disputes are a regional issue with regional implications first and foremost—unless open conflict were to break out—whereas the consequences of say, a North Korean missile attack on Japan, will have immediate and profound international repercussions.

It is therefore perhaps prudent, given that for the United States no direct national security interests—but rather general principles—are at stake in the South China Sea, to either downgrade the South China Sea territorial disputes on the agenda—similar to previous S&EDs—or sidestep them until some progress has been made in regional negotiations between the claimant states.

China and the United States would profit more so by focusing on progress in other areas of mutual interest including the three big C’s: currency exchange rate manipulations, cybersecurity, and climate change—all three of which are in themselves complicated bilateral issues that require close attention.

Can we draw some lessons from any of the big C’s for the South China Sea disputes?

Perhaps. For example, discussions on refraining from conducting or knowingly supporting commercial cyber-espionage stagnated for years, until, as some analysts argue, the threat of sanctions helped push China to acknowledge that the issue was important in the China-U.S. bilateral relationship. (What the sanctions domestically achieved in China was drawing to the leadership’s attention the misuse by the People’s Liberation Army in a corrupt fashion of its intelligence operations.)

The result was that Chinese President Xi Jinping signed an agreement with U.S. President Barack Obama to deepen bilateral cooperation and build trust between the two countries in cyberspace in September 2015. While it did not slow down cyberattacks—in March 2016, Obama renewed the year-old national emergency in cyberspace before its expiration date on April 1st due to continuing cyber threats from China and Russia—it did help to depoliticize the subject and reduce spillover effects into other areas of the relationship.

S&ED South China Sea
printTweet
You might also like
Back to Top
CHINA US Focus 2018 China-United States Exchange Foundation. All rights reserved. Disclaimer