How a Change in U.S.-Cuba Policy Could Affect Chinese FDI 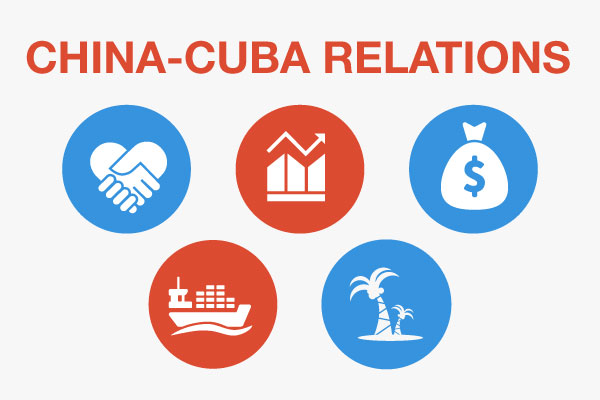 When Barack Obama announced the U.S. normalization of relations with Cuba back in December of 2014, the floodgates of expectation and conjecture were opened with abandon. Many believing it would bring a measure of prosperity to the broken Cuban economy.  After nearly six decades of a contentious and frenzied relationship, it was inferred that a new policy of “engagement” would open Cuba up to American trade and travel, while the administration suggested this new policy would lead to improved human rights in the communist island. Instead, the government of Raúl Castro ratcheted up the number of arrests for “political crimes,” filling Cuban jails with dissidents and other opponents, while clamping down on talk of reforms. Internationally, Cuba doubled-down on its support for the catastrophic Maduro government in Venezuela, and continued to associate closely with the murderous regimes in Iran, Syria and North Korea.

During his campaign for president, Donald Trump, as well as other Republican candidates, criticized the Obama policy as tantamount to appeasing and making one-sided concessions to the Cuban government. Trump promised a reversal and was strident in his criticism upon the death of Cuba’s long-team leader Fidel Castro in November 2016.

On June 16 before a Miami audience of Cuban and Cuban-American opponents of the Castro government, President Trump declared "I am canceling the last administration's completely one-sided deal with Cuba." Criticizing his predecessor Mr. Trump added:

"They made a deal with a government that spread violence and instability in the region and nothing they got, think about it, nothing they got, they fought for everything and we just didn't fight hard enough, but now, those days are over," Trump said. "We now hold the cards. The previous administration's easing of restrictions of travel and trade does not help the Cuban people. They only enrich the Cuban regime."

On further reflection, however, Mr. Trump did not actually cancel the Obama policy so much as he altered one or two central elements of it and turned up the rhetorical volume.

In essence, during his speech, Mr. Trump did make one significant statement about restricting U.S. firms from doing business with Cuba’s military which controls the tourism industry. Through its holding company GAESA, and its tourism branch Gaviota, the Cuban military turn euros and dollars into resources for building the repressive apparatus and, some sources speculate, for funding the private accounts of the highest military and party leaders who run the country. GAESA’s CEO is Raúl Castro’s son-in-law, Col. Luis Alberto Rodríguez López-Callejas.

Gaviota, GAESA's tourism arm, for instance, currently operates the Four Points by Sheraton Havana, a hotel that, when opened, was the first U.S. hotel to open in Cuba in nearly 60 years. The hotel is a joint venture with the Cuban military as a semi-silent partner collecting revenues while U.S. investors provide capital and other resources.

Given that tourism is one of the few areas of foreign revenue available to the government, imposing restrictions on U.S. businesses and investments will largely hamper the efforts of the military to access badly–needed dollars. It may also give pause to other foreign investors counting on the flow of U.S. dollars into Cuba. In this respect, Mr. Trump’s tweaking of the policy is part of a broader strategy to garner a “better deal” for the Cuban people and the U.S. than the more concessionary Obama policy.

The flow of foreign direct investment in Cuba, may be hampered by the new Trump regulations. Chinese investors, for instance, who have made significant bets by building hotels in Cuba, poured hundreds of millions into the Moa nickel mines, helped to explore for petroleum off Cuba’s shores in anticipation of U.S. tourist and trade dollars, will have to think twice if U.S. businesses are restricted from dealing with GAESA or Gaviota.  Initiated in 2015, one such project funded by Beijing Enterprise Group was scheduled to include a golf course, marina, condominiums, and hotels in expectation that the U.S. would lift travel and trade restrictions. A similar agreement by a British firm was also signed for a site just east of the Varadero beach resort and valued at $350 million, with construction scheduled to begin in 2016. Under new restrictions, these investments will be compromised unless they can be de-linked from working with the Cuban state-owned enterprises connected to the military.

The value of Cuba’s tourist industry has always been measured against the eventual opening of relations with the United States as well as the potentially large market created by U.S. travelers and trade. Any direct investment in Cuba, whether by the armed forces or foreign partners, has always been tempered by this reality. Foreign investors such as China and others will now have to calculate whether to partner with state–owned enterprises or find other means. As a businessman, Trump understands the carrot and stick nature of such calculations.

President Trump also re-introduced the rhetoric of human rights with regards to Cuba. Trump, as many presidents before him including Obama, linked the complete ending of sanctions and embargoes on Cuba’s release of political prisoners, respect for democratic rights of speech, press and assembly, and called for free elections. In this respect, the President merely reiterated what has been bipartisan policy since the two countries severed relations in 1962. In his Havana speech, for example, President Obama also made reference to these conditions while criticizing previous administration’s policies and restrictions which he believed failed to achieve them.

President Trump, however, will have a harder time of making the case for human rights when as his first trip abroad included Saudi Arabia, a country Mr. Trump seeks as an ally in the Middle East conflict, but whose human rights record is appalling. Cuban officials have already begun to dismiss these calls. "The United States are not in the condition to lecture us" said one Cuban spokesperson.

The Cuban government, however, is not likely to make fundamental concessions on human rights. For one thing, the Cuban regime is a dictatorship and admits it. Everyone on the island knows it.  Among the many articles and chapters of Cuba’s current constitution are a number of provisions making the socialist system irreversible and emphasizing that,

“When no other recourse is possible, all citizens have the right to struggle through all means, including armed struggle, against anyone who tries to overthrow the political, social and economic order established in this Constitution.”

In Cuba, changes in the status quo places one outside the pale of political discourse and hence you become a “dissident.”

When U.S. officials insist on guaranteed individual and democratic rights for Cuban citizens they are calling for the end of the dictatorship. Unfortunately, dictators are unlikely to renounce their power and go peacefully. History suggests that only pressure, whether internal or external, will force those kinds of changes.

The reality of negotiating with a dictatorship, as both Obama and Trump have found, is that unless one is committed to the abolition of such a political system, options only exist on the margins. Obama rolled back an old policy which appeared not to achieve its aims by restoring diplomatic relations, and thus granting legitimacy to a dictatorship. Trump is not prepared to reverse that far back, but is seeking to exert a degree of pressure by using economic restrictions against dealing with a part of the regime, the military. Both are circumnavigating around the central issue – a regime that does not recognize individual rights or freedoms.

Freedom is both a moral and a practical necessity. Only when men and women have the right to translate the ideas in their heads into reality, whether as works of art, writing and speeches, innovations, products and services, and every other conceivable artifact of human life are people and societies made prosperous and wealthy. Asking the state for permission stifles the process of creation and innovation. That is one reason free institutions are not some mere luxury appendage after a country reaches a level of material prosperity. It is in this vein that the American writer W. H. Chamberlin wrote: “in other words, people do not become free after they have become prosperous; they become prosperous in no small measure as a result of being free.” This is a lesson to be learned in Havana, but elsewhere as well.