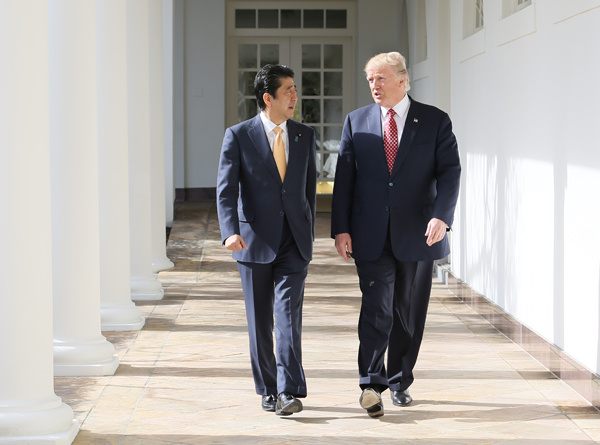 CAMBRIDGE – The key strategic issue in East Asia is the rise of Chinese power. Some analysts believe that China will seek a form of hegemony in East Asia that will lead to conflict. Unlike Europe, East Asia never fully came to terms with the 1930s, and Cold War divisions subsequently limited reconciliation.

Now US President Donald Trump has launched a trade war with China and negotiations with Japan that take aim at Japan’s trade surplus with the United States. While the recent announcement of bilateral talks postpones Trump’s threat of auto tariffs against Japan, critics worry that Trump may push Japan closer to China, whose president, Xi Jinping, is scheduled to hold a summit with Prime Minister Shinzo Abe later this month.

The balance of power between Japan and China has shifted markedly in recent decades. In 2010, China’s GDP surpassed Japan’s as measured in dollars (though it remains far behind Japan in per capita terms). It is difficult to remember that a little over two decades ago, many Americans feared being overtaken by Japan, not China. Books predicted a Japanese-led Pacific bloc that would exclude the US, and even an eventual war with Japan. Instead, during President Bill Clinton’s administration, the US reaffirmed its security alliance with Japan at the same time that it accepted the rise of China and supported its admission to the World Trade Organization.

In the early 1990s, many observers believed that the US-Japan alliance would be discarded as a Cold War relic. Trade tensions were high. Senator Paul Tsongas campaigned for president in 1992 on the slogan, “The Cold War is over and Japan has won.” The Clinton administration began with Japan-bashing, but after a two-year process of negotiation, Clinton and then-Prime Minister Ryutaro Hashimoto issued a declaration in 1996 that proclaimed the alliance to be the bedrock of stability for post-Cold War East Asia.

There was a deeper level of malaise, however, and although it was rarely expressed openly, it related to the Japanese concern that it would be marginalized as the US turned toward China. When I was involved in negotiating the reaffirmation of the alliance in the mid-1990s, my Japanese counterparts, seated across a table festooned with national flags rarely discussed China formally. But later, over drinks, they would ask whether America would shift its focus from Japan to China as the latter grew in strength.

Such anxieties are not surprising: when two allies’ defense capacities are not symmetrical, the more dependent party is bound to worry more about the partnership. Over the years, some Japanese have argued that Japan should become a “normal” country with a fuller panoply of military capabilities. Some experts have even suggested that Japan drop some of its anti-nuclear principles and develop nuclear weapons. But such measures would raise more problems than they would solve. Even if Japan took steps to become a “normal” country (whatever that term may imply), it would still not equal the power of the US or China.

Today, Japan has a new set of concerns about American abandonment. Trump’s “America First” orientation and protectionist policies pose a new risk to the alliance. Trump’s withdrawal from the Trans-Pacific Partnership was a blow to Japan. While Abe has skillfully played to Trump’s ego to deflect conflict, acute differences remain. The Trump administration’s imposition of steel and aluminum tariffs on national security grounds surprised Abe and has fueled disquiet in Japan.

The Trump administration has also suggested that US allies in Asia should do more to defend themselves and openly questioned the value of forward deployed US forces. Some analysts wonder whether Trump’s actions will force Japan to hedge its bets and edge toward China. But that is unlikely at this stage. While such options may be explored, they will remain limited, given Japanese concerns about Chinese domination. The US alliance remains the best option – unless Trump goes much further.

Thus far, the alliance remains remarkably strong. Abe reached out early to President-elect Trump, meeting him first at Trump Tower in New York and then during visits to Washington, DC, and Mar-a-Lago, Trump’s Florida residence. The Abe-Trump relationship allowed the Pentagon to maintain close cooperation on security matters. North Korea helped focus the alliance’s attention and provided an opportunity for Trump to assure Japan that the US was behind Japan “100%.”

Abe and Trump both supported the “maximum pressure” strategy against North Korea, working hard to build international support for United Nations sanctions. Meanwhile, Japan announced a major new investment in ballistic missile defense and cooperated in its joint development. On the other hand, Trump’s surprising reversal in attitude toward North Korean leader Kim Jong-un after their Singapore summit in June raised Japanese concerns about a US deal focusing on intercontinental missiles and ignoring the medium-range missiles that could reach Japan.

Trump’s rhetoric about burden sharing has also raised concern. While Japan’s defense expenditure is little above 1% of GDP, it contributes significant host-country support. The US Department of Defense estimates suggest that the Japanese government pays roughly 75% of the cost of supporting US forces in Japan. This year alone, the Japanese government budgeted ¥197 billion ($1.7 billion) for cost sharing, ¥226 billion ($2 billion) for the realignment of US forces, and ¥266 billion ($2.3 billion) in various types of community support, among other alliance-related expenditures.

As the Clinton administration recognized a quarter-century ago, China’s rise created a three-country balance of power in East Asia. If the US and Japan maintain their alliance, they can shape the environment that China faces and help moderate its rising power. But that will depend on whether the Trump administration successfully maintains the US-Japan alliance.

China-US-Japan Relations
printTweet
You might also like
Back to Top
CHINA US Focus 2020 China-United States Exchange Foundation. All rights reserved.