The following is the transcript from Mr. Goh Chok Tong's speech at the Forum, which has been edited for style and brevity. 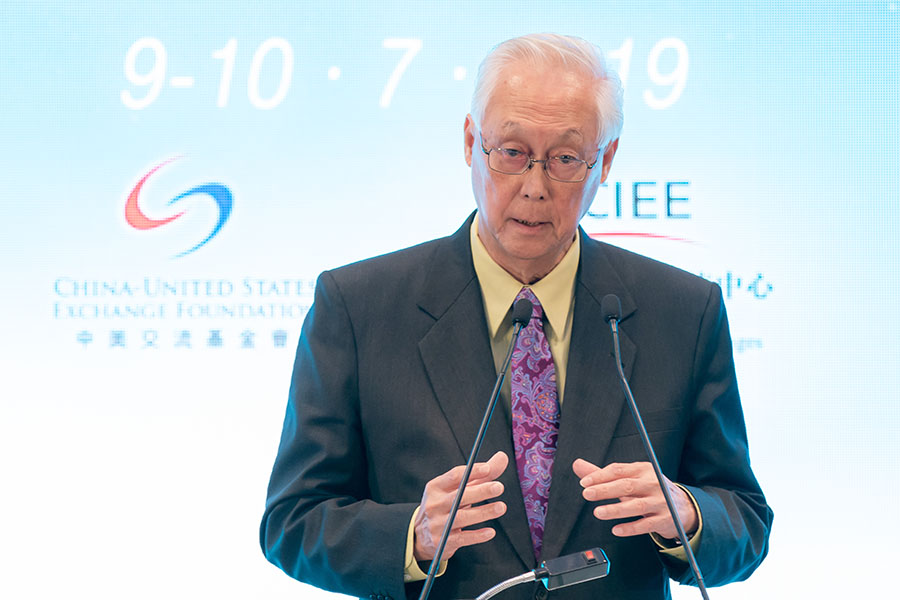 Mr. Goh Chok Tong made the speech 'Development or Disaster' at the ‘U.S.-China Trade & Economic Relations: What Now, What Next’ Forum in Hong Kong on July 10, 2019.

I shall speak on the topic of globalization, global governance and multilateralism from the perspective of a small country. Singapore is very tiny; trade is three times the size of our GDP. We are an open economy. Without a rules-based system, we might not even have been able to survive, because there would have been no jobs for our people.

So, I feel very strongly about this topic. Our world is at a new crossroads. We talk about global warming, climate change. I think we are also seeing “political warming” in the world, which may, if it is unchecked, set off a change to the entire global political climate. So, I see two possible futures – one is a path to disaster and the other a path of development.

There are two global trends that might lead to disaster – de-globalization and decoupling which leads to a divided global order. Globalization has benefited all of us, but we are now seeing the tail-end negative effects of globalization. One is international income inequality - that is very difficult to fix. By its own definition, globalization means competition – the ablest and the best will win, whether it is the Olympic Games, sports and so on. Those who are not so good will be left behind. The consequence of those countries being left behind will lead to migration, legal or illegal. You can see migration towards Europe from Sub-Saharan countries in Africa, you can see migration through Mexico, south of the American border. But that is income inequality on an international basis. Income inequality within a country is what drives angst in society, what allows politicians to either resolve it or to seize the opportunity to win elections – what you might call “populist politicians.”

Realistically, we should try and restructure our economy and recognize where jobs are being lost. We have to train people for a new economy where current technology is driving many people out of jobs, creating further income inequality. Redistribution is the easiest – you tax the consumers through tariffs and then you redistribute, provided you redistribute. But if you lower taxes for the rich, you do not have any additional resources to redistribute. But most importantly, it is to address the root cause of domestic income inequality – education, family support, skills training, where you can try and bring them up.

Unfortunately, that is not being done in my view, from looking at Europe and the US. That is when the politicians move in. The politicians allege that the cause for their grievance originates from the outside, and in this case, it’s globalization. “Globalization has taken away our jobs, we must take them back.”

So, the people have spoken to reflect their fears. And these are genuine fears – they cannot cope with the changing world. In the UK, they chose Brexit, though Brexit is not over globalization but “Europeanisation”. In the US, “America First” has resonated with many people. In France, the “yellow vests” rioted in the streets. Most recently, right-wing and populist groups gained ground during the European Parliament elections, especially in Italy and the UK.

Populist politicians have been able to tap into this vein of discontent. They blame countries, foreign investments, imports and immigrants for causing much of their domestic problems. We therefore see an inward-looking nationalistic attitude towards globalization. That is the concern, that is the trend that we must watch out for, from multilateralism to nationalism to unilateralism, from an open global economy to selected protectionism. I do not think we, the global community, will move into protectionism in a substantial way, but I believe more and more countries will likely go into selective protectionism to protect critically important industries.

I worry sometimes, that in quarrelling over the distribution of the golden eggs of globalization, we may risk killing the golden goose itself.

This morning, I listened to the talks on the US-China strategic rivalry. In Beijing at Tsinghua’s World Peace Forum, I made the point that we have to do what we can to avert this catastrophic trend. The two elephants are fighting, or at least one elephant sees the other elephant as a threat. When you point your finger at someone as a potential enemy, that person or that country must begin to prepare itself for the future. Although they might not have started as enemies, the party being treated as an enemy will begin to carry itself as such simply because of the other side’s antagonism.

It is precisely that potential conflict which all of us are trying to avert. Are we helpless as small countries? No. In Beijing, I urged the formation of the “Voice of Moderation.” I do not mean this as a bloc or a new movement, but people like ourselves, people here who understand China, understand the US, who understand the conflict and challenges – we must speak up to the right audience. And the right audience will be the US establishment, who do not travel very much – we have to find a way that the narrative can get through to them – that China is not an enemy.

I say so because, like many of you, I have been to China many times. I first visited China in 1971 in the midst of the Cultural Revolution. Those who have been there from the early days understand that in a matter of 30, 40 years, China has transformed itself, China has grown. So why should China destroy everything?

Nevertheless, China is growing very big. It is a “threat” in the sense that whatever we can do, China can do. I use the term “economic threat” for Singapore. Whatever Singapore can do, China can do better. We have scientists, they have more scientists. We have engineers, they have more engineers. Manufacturing, semiconductors, we used to do that; now they can do better. Telecomms, 5G – they are way ahead.

So, my concern as a former Prime Minister is over Singapore’s prosperity if China is indeed perceived as a “threat.” I came to the conclusion that having a prosperous neighbour is better than having a poor neighbour. When I was in office, I only needed to feed and get jobs for six million people. If China has 1.4 billion people, with a growing number entering the middle and upper class, Singapore has a much easier job of doing business with a wealthy country.

I am not dismissing everything the US has said regarding unfair trade rules. China joined the WTO as a self-declared Developing Country. China will be at the forefront of innovation, intellectual property, which China must protect, or other countries will steal it. These are part of the process of globalization. My speech in Beijing mentioned the lack of strategic trust – so the question is, how do we get people to develop this trust?

When I listen to William Owens, I understand how difficult, how conflicted you are. The US must prepare for war, the worst kind of disaster, but no one really wants to go to war. You cannot win a war, because innocent lives will be lost, economies destroyed, countries will be vanquished. I have tremendous respect for your attitude – we have to prepare for war, but we do not want war.

Can the US change China? I think in some ways you can, and China should make changes and reform where they can. But to change a system of governance is not possible. China is not just a system of communist government; it is a civilizational form of government. China has always been governed from the center, the emperor, the mandarin system in China. You change it – call it Chinese governance with American characteristics – and parts of that system China will be able to learn. But to change to a governance system that allocates one man with one vote, I don’t think that will happen for at least another century in China, probably never. Maybe in certain areas that will be allowed, but not across the nation.

The Chinese actually sent people to Singapore to study our system because my party, the People’s Action Party, has been winning election after election overwhelmingly. Anything less than 60 percent for my party is regarded as a loss. One possibility is that China could use that model, and have elections where they could win again and again and again.

In 2011, we had a setback, meaning that votes went down from about 65% to 60%. Chinese officials came to study how the party would react and recover these votes. This suggests to me that China knows you must allow freedom of votes in many areas. And in fact, China started to allow counties and villages to elect their own leaders. But when Chinese officials look at the problems of the liberal democracies in Europe and the US, their experiment at democracy has not gone upwards. They must have a system, like the Catholic Church, that you elect your local priests who then elect their bishops and so on, and a small group of bishops then elect the Pope. The Pope appoints the bishops. You cannot do that for the US – it is a different culture and system.

There should be the democracy of nations. Within each country, everyone has the right to exercise democracy. Within the world, each country must exercise their right of the form of government. Then you judge whatever system you have by certain norms: rule of law, the way you treat a human being, whether you are able to develop growth and a better life for people. These are objective norms which can be exercised by forms of government that allow each one of us to have the best form of government for ourselves.

Therefore, I come back to my first point, how to avoid the path of disaster – and that is to have this “Voice of Moderation”. When we can, we speak up. Not to take the side of China or the US, but the side of principles: for rule of law, for a multilateral trading order where big and small countries have equal rights. That is what I hope we do, and that we build trust and understanding between all countries, not just between the US and China. Because I am also thinking about China and Japan, South Korea and North Korea. Trust and understanding, that is important. This is where the “Voice of Moderation” can play a part.

GlobalizationGlobal GovernanceU.S.-China RivalryChina Threat
printTweet
You might also like
Back to Top
CHINA US Focus 2021 China-United States Exchange Foundation. All rights reserved.