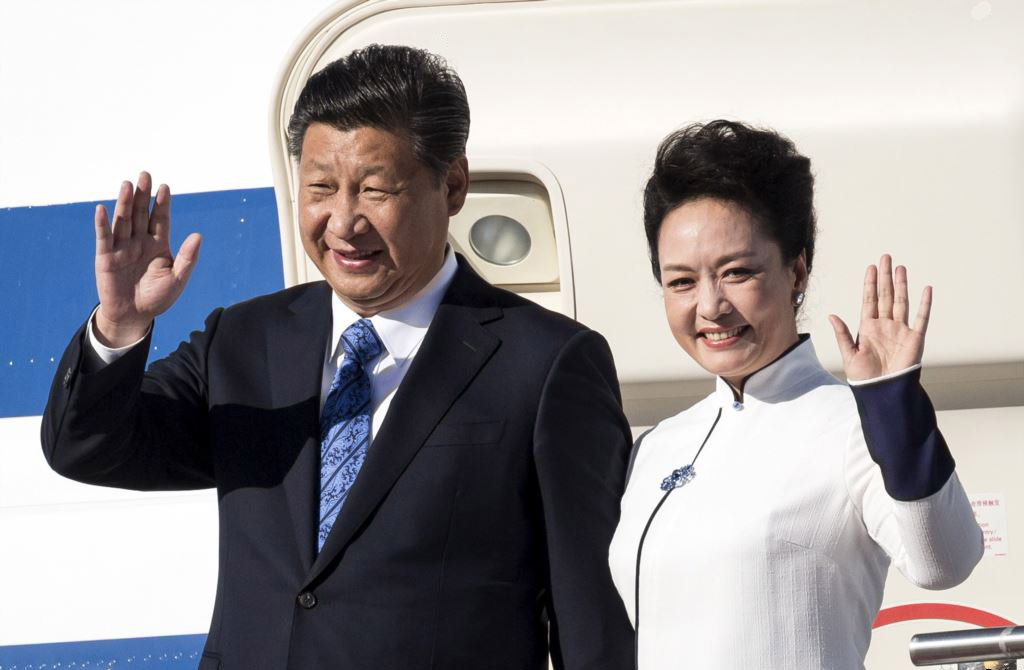 Chinese President Xi Jinping and his wife Peng Liyuan wave upon their arrival in Seattle, the United States, Sept. 22, 2015. Xi arrived in this east Pacific coast city on Tuesday morning for his first state visit to the U.S. (Xinhua/Li Xueren)

In genial early-fall sunshine, the plane carrying the Chinese delegation touched down and taxied to a stop at Paine Field under the earnest gaze of a jubilant welcoming crowd.

With a beaming smile, Xi and First Lady Peng Liyuan stepped out of the hatch and waved to spontaneous applause before they walked down the ramp hand in hand and were greeted by local and federal dignitaries led by U.S. President Barack Obama‘s representative, Washington Governor Jay Inslee.

“I look forward to having in-depth exchange of views with President Obama” and engaging the U.S. public, Xi said in an arrival statement. “I am confident that with concerted efforts of the two sides, my visit will yield fruitful results and bring China-U.S. relations to an even higher level.”

The U.S. trip is Xi’s second as head of state and his seventh in total. In June 2013, three months after he took over the Chinese presidency, he traveled to the U.S. state of California and held a no-necktie summit with Obama, during which they reached consensus on building a new type of major-country relations between their countries.

During his stay in Seattle, which already hosted Chinese leaders Deng Xiaoping, Jiang Zemin and Hu Jintao and maintains a 32-year-old sister-city relationship with the southwestern Chinese metropolis of Chongqing, Xi is scheduled to deliver a major policy speech on China-U.S. ties.

He will also meet with local government leaders, attend a China-U.S. governors forum and an entrepreneurs symposium that gathers the two countries’ business bigwigs, visit representative enterprises, and join students and teachers in a variety of school activities.

From the U.S. West Coast hub, Xi will fly to Washington for a summit with Obama at the White House, where he will be honored with a 21-gun salute and a state dinner. He will also compare notes with Congress leaders.

The Xi-Obama meeting will be the fifth between the two heads of state. Obama paid a state visit to China in November, during which they enjoyed an exceptional night stroll in the Zhongnanhai compound in central Beijing. They also met in September 2013 and in March 2014 on the sidelines of two multilateral summits.

As interaction between the world’s largest developing and developed countries — which account for a third of global output, a quarter of human population and a fifth of world trade — gains more world-shaping influence, hopes are running high for Xi’s ongoing visit, which many compare with Deng’s epoch-making U.S. tour in 1979.

Since the trip was announced in February, U.S. National Security Advisor Susan Rice, Chinese presidential envoy Meng Jianzhu and a string of other senior officials have shuttled across the Pacific to bridge gaps and pave the way. In June, the two sides rounded off their latest round of high-level intergovernmental talks with over 300 concrete results.

In a recent briefing about the state visit, Chinese Foreign Minister Wang Yi said that the trip will bear rich fruit, with the two countries poised to reach consensus in a wide range of areas, including trade, energy, finance and defense, and ink a trove of far-reaching deals.

“The most important outcome will be an infusion of new stabilizers and the creation of a more favorable atmosphere on strategic matters,” said Yang Xiyu, a senior researcher with China Institute of International Studies (CIIS), a Beijing-based think tank, citing the current “subtle and complex” situation of China-U.S. ties.

In the wake of China-U.S. sparring over South China Sea, cyber security and some other matters, which has fueled Thucydides Trap worries, the upcoming Xi-Obama summit will mark “a turning point for the better,” he added.

The Chinese president’s latest U.S. tour will also take him to New York for his first appearance at the UN headquarters, where he will attend and host a series of summits and conferences on such diverse subjects as climate change, women’s affairs and South-South cooperation, and meet with a number of national leaders.

Upon the 70th anniversary of the UN’s founding, Xi is expected to expound China’s standpoints on international order and global development and governance among other weighty topics, and announce Beijing’s major measures in safeguarding world peace, promoting common development and supporting the UN and multilateralism.

Through the visit, China will tell the world that it is committed to putting the China-U.S. relationship on a healthier and steadier track and that it is a builder and guardian of the international system, he added. “Such messages matter.”