China “will continue its attitude of openness toward foreign media”, and interviews and reporting by foreign media and reporters in China are welcome, President Xi Jinping told visiting media mogul Rupert Murdoch on Friday. 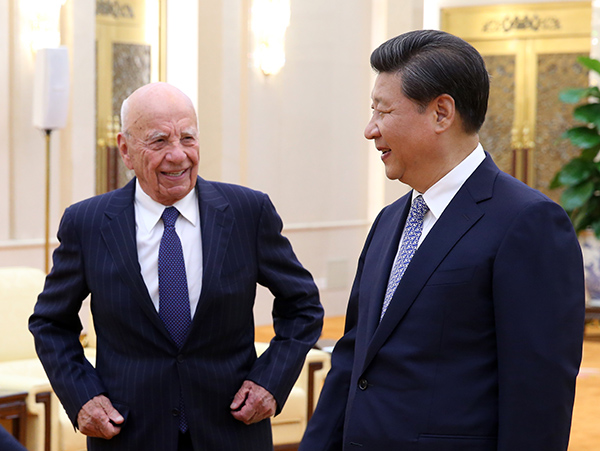 Ahead of his first state visit to the United States next week, Xi made the remarks in a meeting with the News Corp founder and chairman. Xi said media outlets from abroad are expected to “boost mutual understanding and cooperation” between Chinese people and people of various countries.

Murdoch noted that US media are focusing on Xi’s upcoming state visit, from Tuesday to Friday, as well as Xi’s exchanges and interactions with all walks of life there. Media affiliated with his corporation－including the Wall Street Journal－will cover the visit and boost understanding between the two peoples.

“We are very happy, in my newspapers and different news outlets, to try and foster more understanding between our two countries, I think not just on a formal basis, but also with people themselves,” he said.

Dong Guanpeng, dean of the Academy of Media and Public Affairs at Communication University of China, said Xi’s meeting with the media tycoon sends the message that “the country is not mysterious or untold as suggested”, and that China is open to contacts with world media regarding the country’s concerns.

While News Corp has a range of world-class financial media that “have been tracking the Chinese economy and seeking answers to questions about it”, what China seeks is greater details and accuracy about the second-largest economy in the world, Dong said.

Prior to his state visit, Xi met with US delegates attending the seventh China-US business leaders’ dialogue on Thursday.

Yuan Peng, vice-president of the China Institutes of Contemporary International Relations, said: “The leaders of the largest and second-largest economies in the world are expected to make topics, such as economic cooperation and climate change, transcend the issues often hyped by some US media”, such as the South China Sea and cyberspace.

Assistant Foreign Minister Zheng Zeguang estimated at a Thursday news conference that a new consensus will be reached on hot spot issues regarding Asia-Pacific affairs, the Iran nuclear issue, the Korean Peninsula nuclear issue and Afghanistan.

Ruan Zongze, vice-president of the China Institute of International Studies, said that as China is increasingly proactive and transparent when shaping foreign policy, it is proposing more initiatives in the global arena, and the US should view China with a more reasoned and objective approach.

“The relationship is not a solo dance by China alone. It’s realized by both China and the US,” Ruan said.