Anyone desiring amicable and constructive U.S.-China relations must take an interest in the bitter struggle being waged in Japan between the people of Okinawa. The Abe government in Tokyo—acting as an agent for the Obama administration and the Pentagon—is creating bitter divisions over the building of a massive new U.S. military base. 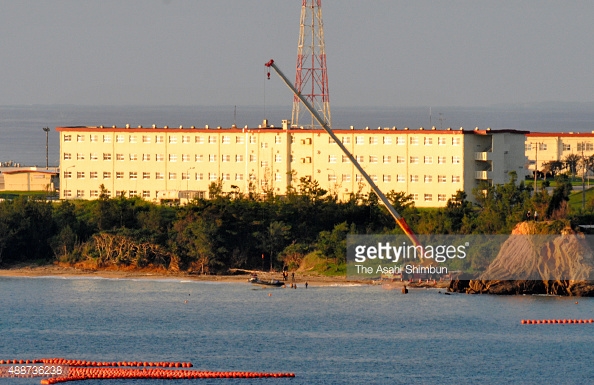 Work to prepare for the construction of a new U.S. base resumes with a crane on the beach within Camp Schwab on September 12, 2015 in Nago, Okinawa, Japan. Okinawa Governor Takeshi Onaga is poised to halt the project by starting the process to rescind the approval given to the central government by his predecessor to reclaim land for the new base. (Photo by The Asahi Shimbun via Getty Images)

The new base, to displace a large swath of Oura Bay while incorporating the existing Camp Schwab at Henoko, is ostensibly a relocation of the Futenma U.S. Marine Air Station, located in the city of Ginowan. Yet is a much larger, comprehensive base, the use of which by any U.S. air, sea, or ground forces will be unrestricted.

When President Obama met with Prime Minister Abe on the sidelines of the APEC meeting in Manila on November 19th, one of the five scripted “for-the-media” topics was the new U.S. base at Henoko (another was U.S. “freedom of navigation” patrolling in the South China Sea).

The new base will be the first major base built in Japan since the 1950s. It constitutes a major “change in the status quo” expansion and augmentation of U.S. military power in East Asia, part of the Obama administration’s “rebalance” aimed at maintaining unchallengeable American military supremacy in East Asia.

Objective analysts are increasingly recognizing the Obama administration’s “rebalance” (AKA “pivot to Asia”) as a serious obstacle to achieving a constructive, amicable, “win-win” relationship between the United States and China. For many Japanese, and not just in Okinawa, the base project both symbolizes and threatens to materialize the perpetual foreign military occupation of their country, over 70 years after their defeat in WWII.

For both these reasons, the new Henoko U.S. base project must be recognized as a grave strategic mistake, which should be corrected by its cancellation. The project has remained on the Pentagon’s action agenda for almost two decades, despite growing opposition in Japan and independent studies proving that it is unnecessary and ill-advised. It clearly demonstrates the political power and control over policy in Asia by vested national security bureaucracies and lobbies in Washington, and increasingly, in Tokyo.

During the November 19th meeting, Obama wanted from Abe an unambiguous commitment to continue construction of the base despite violent local protests, the Okinawa governor’s revocation of required permits, and initial legal challenges that could—according to some legal scholars, should—halt all work. Abe dutifully expressed his “firm determination to proceed.”

Okinawa’s intrepid governor, Takeshi Onaga, won a landslide election victory last year pledging to stop the new base project. The people of Okinawa have repeated elected representatives opposing the new American base, despite enormous pressure and blandishments from the Tokyo government.

Governor Onaga, frustrated by the intransigence of both the Japanese and American governments, traveled to Washington, D.C. in order to meet with congressional leaders. He then went to Geneva, Switzerland to present the case to the United Nations Human Rights Commission. “Okinawa is a very small place, it is challenging to discuss with both Japanese and U.S. governments when our rights of self-determination are not respected,” he told the press on September 22.

The situation in Okinawa is being noticed.  A November 5th editorial in the International New York Times entitled “Denying the Will of Okinawans” observes:

“Japanese police in riot gear are dragging away grandparents; protesters are linking arms and lying down in front of military trucks.  A local mayor is accusing the central government of lawlessness, and a governor is denouncing ‘iron-fisted rule’ from Tokyo.

“That is the tense and ugly situation in Okinawa, where an old battle is intensifying over Japan’s plan, hatched with its strategic partner the United States, to vastly expand an American military base over the long-held, impassioned objections of Okinawans.”

“Japan and the United States see themselves as nations committed to peace, human rights, and democracy. Those claims have been tested by the failure to resolve the Henoko standoff.”

Judging from the meeting between Obama and Abe in Manila, the Henoko crisis will continue.

But even if some resolution could be found; indeed, even if the project were—as it should be—cancelled, the more fundamental problem would remain: this is the post-WWII/Cold War structure of American bases and alliances, with the U.S.-Japan alliance at its core, designed to maintain unchallengeable American military (and geopolitical) supremacy in East Asia.

Why this structure requires basic reordering, or more so, dismantling; and why a new structure must be built wherein the natural and legitimate security interests of China are protected; and why China’s role as a responsible regional power is recognized, has been brilliantly elucidated by Australian National University professor Hugh White in his 2012 book: The China Choice: Why America Should Share Power.

Professor White explains that 19th and 20th Century alliance systems are obsolete in the 21st Century. The U.S. system in Asia is counterproductive and invites the potential for disastrous and unnecessary conflict.

The great Dr. Henry Kissinger is now counseling to world leaders that war between modern advanced nations can no longer be seriously and responsibly contemplated, such would be its disastrous consequences for all concerned.  He has appealed for the rejection of the old model of “power politics” and is searching for a new model of geopolitical order.

Only a structure of independent, sovereign states, upholding principles of non-confrontation, non-conflict, with due regard for others’ core interests can, I believe, ensure peace, stability and progress in East Asia.

Building such a structure will require deep changes in American strategy and policy—beginning with a reversal of the “rebalance.”