US FONOP at Scarborough Shoal a Harbinger of Increased Tensions in the South China Sea? 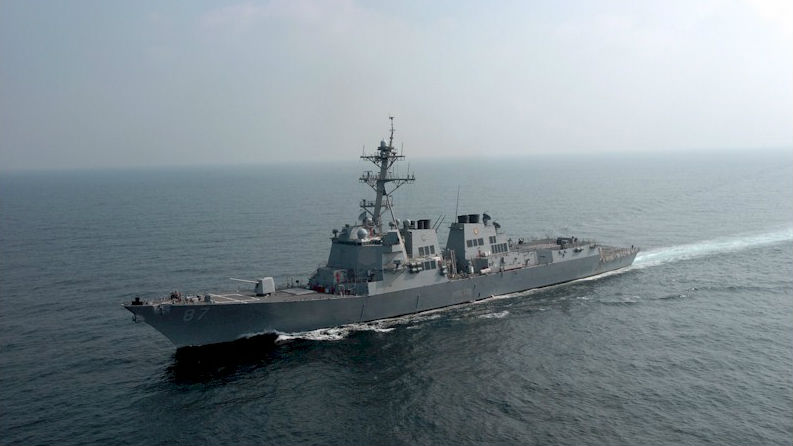 On Wednesday 17 January, the U.S. Navy conducted a much anticipated “freedom of navigation operation” (FONOP) in the South China Sea when the guided-missile destroyer USS Hopper sailed within 12 nautical miles of Scarborough Shoal.

Scarborough Shoal is a tiny atoll—technically a rock which is entitled to a 12 nm territorial sea—located 120 miles west of the Philippines’ main island of Luzon. Sovereignty of the shoal, which lies within the Philippines’ 200 nautical mile exclusive economic zone, is claimed by both Manila and Beijing. Although the feature is not in the contested Spratly archipelago, the bilateral squabble is very much a part of the wider South China Sea dispute involving China, Taiwan, and five Southeast Asian claimants.

In mid-2012, after a tense two-month standoff between the two countries’ coast guards, China seized de facto control of Scarborough and prevented Filipino fishermen from accessing the rich fishing grounds in and around the reef. That blockade was lifted in late 2016 following a visit to Beijing by Philippine President Rodrigo Duterte. The populist leader had come to office in June with a promise to improve ties with China which had nosedived under his predecessor Benigno Aquino. Since then, Filipino fishermen have been allowed to fish near (but not inside) the shoal, although the area is heavily patrolled by Chinese coast guard vessels and, further afield, Chinese warships.

The Hopper’s “innocent passage” operation was the ninth U.S. Navy FONOP in the South China Sea since 2015. Four FONOPs were conducted during the Obama administration, and this was the fifth since President Donald Trump took office in January 2017 (though some observers have suggested that other FONOPs in the South China Sea have gone unreported.) The previous eight FONOPs had been conducted near Chinese-occupied features in the Paracels and Spratlys. However, the U.S. military is no stranger to Scarborough Shoal, having used the feature as a bombing range for decades prior to the closure of U.S. bases in the Philippines in 1992.

In accordance with the Pentagon’s policy of keeping FONOPs low-key, the Scarborough Shoal mission was neither publicized nor confirmed. A defense department spokesman merely noted that the U.S. armed forces regularly conducts FONOPs around the world in accordance with international law.

China’s response to the USS Hopper’s sail by was formulaic. As with previous FONOPs, both the foreign and defense ministries condemned the Hopper’s actions as violating Chinese sovereignty, endangering maritime safety, and undermining peace and stability. The defense ministry also claimed that a Chinese warship had “driven away” the Hopper after issuing a warning (this “fact” remains unconfirmed.)

However, unlike the first seven FONOPs, news of which were leaked to the press by U.S. officials, the last two were made public by China. For two reasons, FONOPs serve China’s policy in the South China Sea well. First, Beijing can argue that it is America and not China that is militarizing the dispute. And second, they provide China with a pretext to justify its own military build-up on the seven artificial islands it has created in the Spratlys. As such, in the wake of the Hopper FONOP, the defense ministry stated that it would “intensify its patrols in the air and at sea, in order to safeguard the sovereignty and security of the country.” And as the Chinese Communist Party’s mouthpiece The People’s Daily declared, “If the relevant party once more makes trouble out of nothing and causes tensions, then it will only cause China to reach this conclusion: in order to earnestly protect peace in the South China Sea, China must strengthen and speed up the building of its abilities there.” Although Beijing claims that the facilities on its manmade islands are defensive in nature, and designed to provide public goods such as safety of navigation, in reality the infrastructure — including three long runways, radars, barracks and gun emplacements — allows China to project air and naval power into the heart of maritime Southeast Asia.

The timing of the USS Hopper’s mission is significant. It came after a three-month hiatus in South China Sea FONOPs which, according to reports in the first few months of the Trump administration, were supposed to have been conducted on a scheduled basis of  every 6-8 weeks. The White House may have called for a pause in the missions as part of an effort to persuade China to ramp up the pressure on North Korea to end its nuclear weapons program. A resumption of FONOPs may be Washington’s way of signaling to Beijing that it needs to squeeze Pyongyang further.

More importantly, perhaps, the FONOP occurred two days before the Pentagon released the unclassified version of its 2018 National Defense Strategy (NDS). The NDS, following on from the 2017 National Security Strategy, bluntly labels China a “strategic competitor” which seeks to displace the U.S. in order to achieve hegemony in the Indo-Pacific and, ultimately, global pre-eminence. The NDS accuses China of using “predatory economics to intimidate its neighbors while militarizing features in the South China Sea”. As part of a series of measures to counter the challenge posed by China, the NDS outlines a series of objectives including “bolstering partners against coercion” and ensuring “common domains remain open and free.” These two policy initiatives were high on Defense Secretary James Mattis’ agenda when he visited Indonesia and Vietnam—both parties to the South China Sea dispute—a few days after the NDS was released.

Should the U.S. increase the frequency of its FONOPs in the South China Sea, Beijing might, as it has warned, start to rotate warships and military aircraft — including fighter jets which have yet to use the runways — through its artificial islands on a regular basis. China may also choose to shadow U.S. warships in a more aggressive manner. If so, after a lull of over 18 months, tensions could well experience an upsurge in the South China Sea.

South China SeaFreedom of Navigation OperationSoutheast Asia
printTweet
You might also like
Back to Top
CHINA US Focus 2018 China-United States Exchange Foundation. All rights reserved. Disclaimer