Toward a New National Security Space Strategy: Benefiting from Entanglement with China

(This article is coauthored with Joan Johnson-Freese, Professor of National Security Affairs at the U.S. Naval War College.)

With a new U.S. administration entering in 2017, all policy bets are on the table. While “space” is increasingly recognized as a vital U.S. national interest, rarely does consideration of space policy stating national goals (ends) or appropriate strategies for achieving those goals (means) get discussed beyond a small cadre of individuals within the security community. We have recently argued in an Atlantic Council strategy paper that such a situation can and has led to misalignment of strategy ends and means, and we urge a “rebalancing” of means – diplomatic and military – in the new administration.  Specifically, if stability, sustainability of the space environment, and access to space are enduring space goals, which we think they are, then diplomacy and deterrence by denial must be integral and equal parts of the means used toward achievement, along with traditional military means and deterrence by punishment.  Regarding China, entanglement, as a method of deterrence by denial intended to create conditions whereby the real or perceived costs of an antagonistic or nefarious action exceeds the benefits, appears an underutilized approach that could provide useful to both countries. 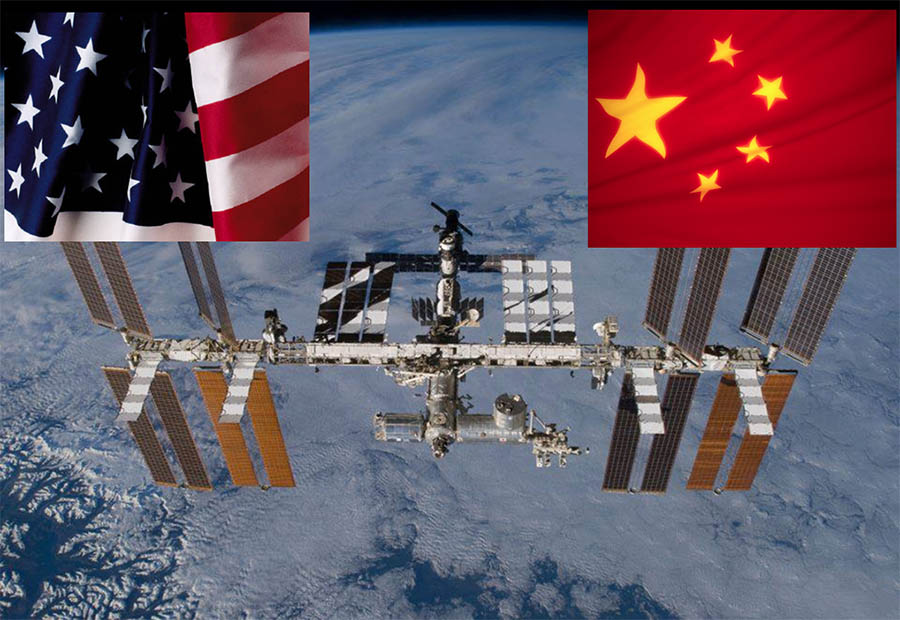 The Chinese space program has advanced by leaps and bounds in recent years, as evidenced in its Shenzhou human spaceflight program and Chang’e robotic lunar exploration program, as well as its full spectrum of dual use satellites and launchers (meaning of value to both civil and military communities and having both offensive and defensive capabilities) with increasingly sophisticated capabilities. China’s 2013 self-designated space science mission to near-Geosynchronous orbit, viewed by the U.S. military and intelligence community as potentially threatening the “sanctuary” of that orbit for its large, “exquisite” satellites, triggered a near-panicked Strategic Space Portfolio Review (SPR) in the United States and, consequently, policy and programmatic movement toward more militaristic answers to space challenges. But not all problems are nails appropriate to be addressed with a hammer. Space is a global commons, where no country owns it but use by one affects use by all.  Therefore, it is in the best interests of all user countries to maintain its viability for use, and we believe entanglement expands the potential for countries to work toward that goal.

Entanglement here references two or more parties being deeply involved with each other. The entanglement of the U.S. and Russia on the International Space Station provides a useful example of the benefits.

Since the 2014 Russian intervention in Ukraine, and especially the 2015 Russian military incursion into Syria, U.S.-Russia relations have been “strained” at best.  Bellicose Russian nationalism cum anti-Americanism has been evidenced in a variety of areas of foreign policy, including space. Russia was the “spoiler” of earlier 2015 attempts by the European Union to establish an international code of conduct for outer space activities. And yet, U.S.-Russia cooperation on the ISS remains strong. The technologically intertwined nature of ISS cooperation would make disentanglement an extremely messy divorce. Consequently, regardless of larger geopolitical issues, ISS cooperation continues and requires consistent, continual, valuable dialogue between U.S.-Russian officials from the strategic through the tactical level, something that has been sorely lacking in U.S.-China relations. Opportunities to expand communications should similarly be pursued, and at all levels.

As China becomes increasingly dependent on space assets, it organically becomes entangled in the responsibilities of a space-faring nation with a growing stake in containing and abating space debris. China irresponsibly contributed to the space debris issue with its 2007 anti-satellite (ASAT) weapon test that exponentially increased the debris in orbit. Subsequently though, on more than one occasion the U.S. Air Force provided China with warnings, through the State Department, of a potential debris collision with a Chinese satellite, warnings China never acknowledged.  But in 2014 China took the unprecedented step of requesting a direct link with U.S. Air Force Space Command for collision warnings. Clearly, China has recognized the debris hazard as a peril to all space faring nations, including itself, thereby giving China a vested interest in working with others toward prevention and abatement. China is a member of the Inter-Agency Space Debris Coordinating Committee (IADC) that has created guidelines for prevention.  A bilateral (or multilateral) active removal project could be a useful step forward for both countries toward addressing an acknowledged threat to space assets, and through entanglement create a need for consistent communication between the U.S. and China regardless of externalities.

The benefits of communication are maximized when it takes place at multiple levels.  High level, strategic communication ideally provides opportunities for decision-makers to clearly convey their “bright lines.”  As we point out in our Atlantic Council strategy paper, if China is unaware of what constitutes U.S. “bright lines” regarding negative behavior in space, during either peacetime or wartime, the risk of unwanted escalation grows. As an example, the Defense Department’s 2016 report to Congress on Chinese military power states that China may be considering using counterspace capabilities to target U.S. early warning and navigation satellites. If true, it shows that there is an enormous misunderstanding by China of the importance to the United States of early warning satellites in the nuclear kill chain—something even the Soviet Union understood, hence the mutual ban on attacking these assets embedded in US-USSR bilateral nuclear-arms-control agreements.

Communication at lower levels allows both parties to learn the parameters within which their counterparts operate and make decisions, something that has been especially difficult for the United States because of Chinese cultural and political opacity. Because space technology is largely dual use, the United States is too-often left speculating on Chinese motivations and intentions, often assuming worst-case scenarios which spin-up security dilemmas with accompanying unwinnable arms races. The learning process through working-level communication is accelerated when parties are not just talking, but actually have to work together toward shared goals, such as is the case with the ISS. With station operations run through both Moscow and Houston, communication and cooperation are required.

Entanglement also creates stakeholders in involved countries.  Currently, largely due to the legislative ban on U.S.-China bilateral space cooperation, there is little or no incentive for those in the Chinese space or security communities to argue in support of prudent space policy or behavior, because they have nothing to lose by unrestrained actions they may perceive to their benefit. Effective deterrence requires both carrots and sticks, and there are a variety of carrots that could be offered through NASA and the U.S. civil space program.

Finally, it is important that the security communities in both the United States and China recognize that entanglement offers benefits to both countries.  Too often U.S. space cooperation with China is portrayed in the United States as essentially “doing China a favor.” Too often China appears to be teetering on the edge of being an irresponsible space actor, as was the case in 2007.  Both countries appear to be ramping up their reactive military responses to each other’s perceived threatening activities.  But it is in the best interests of both countries to maintain the space environment. Therefore, the U.S. and China must actively seek ways to meet that goal, and organic and deliberate entanglements in space can play an important role.

Space cooperation and entanglements will not result in a country fundamentally changing its domestic ideologies or geostrategic goals. The U.S. offering or withholding cooperative space opportunities did not influence Communist Party rule of the Soviet Union positively or negatively, nor will it with China. But it might temper the means that China will use to achieve its space goals. With stability and sustainability of the space environment a prerequisite for all other U.S. space goals that seems a valuable benefit.

Space Cooperation
printTweet
You might also like
Back to Top
CHINA US Focus 2018 China-United States Exchange Foundation. All rights reserved. Disclaimer