What is the U.S. position on NATO? How does the U.S. intend to deal with growing threats from North Korea? What is the U.S. position on China and Russia? Is the U.S. picking a trade war with Canada? Where does the U.S. stand on the Iranian nuclear agreement? Is the U.S. fleet on its way to Korea? These questions and many more like them feed the headlines every day, with answers coming from Twitter, remarks from President Donald Trump, the Pentagon, and Press Secretary Sean Spicer, though not necessarily always consistent or in agreement. Whether a product of deliberate flexibility, indecision, lack of coordination, and lack of comprehension about the subject matter or some other reason, U.S. strategic communication on a variety of key foreign policy topics has seemed to go haywire.  Space security strategy is no exception. 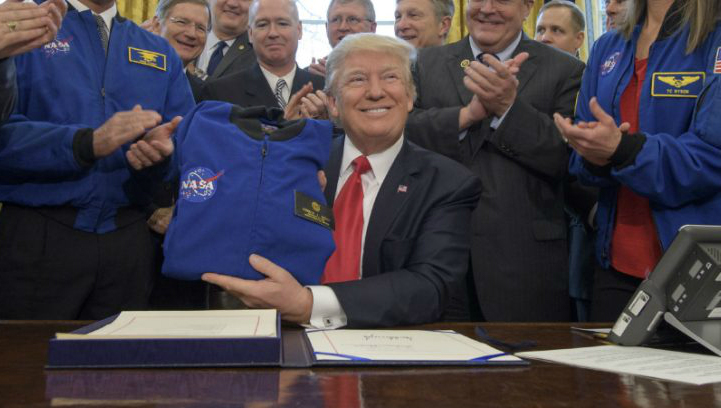 In response to a question about Russian work on anti-satellite weapons at a April 2017 hearing before the Senate Armed Services Committee, General John Hyten, head of U.S. Strategic Command, stated that the United States must “have the ability to defend” against those threats and “build an offensive capability to challenge” theirs. The part about building an offensive capability was confusing and alarming to those who follow space issues, especially since in January 2017 talk at Stanford University, Hyten had pulled back on space war rhetoric. There he had focused on deterrence as a means to avoid space war. Consequently, Secure World Foundation analyst Brian Weeden said that he checked with several D.C. sources and “explained” Hyten’s hearing comments in a media interview. “What he’s talking about is a U.S. offensive capability to defeat ASAT attacks on U.S. satellites, not a U.S. offensive capability to attack Russian/Chinese satellites. That’s a subtle, but important difference.”

When remarks by a high-ranking official in charge of some of America’s most intimidating hardware have to be explained, that inherently raises the risk of misinterpretation and therefore the threat specter.

Hyten has also said, repeatedly, that the “one limiting factor” to war in space is debris. “Whatever you do, don’t create debris.” Debris is created by kinetic impacts of the type created by many anti-satellite (ASAT) weapons. That can then lead to the assumption that whatever offensive weapons Hyten was talking about are of some other variety.  If the past is any predictor of the future, then whatever capabilities the U.S. develops, other countries will as well. Since the U.S. has the most assets in space and is the most dependent on them, the likely “keeping up with the Jones’” technology spiral likely to ensue could put U.S. assets in more, not less, danger. Hence the security dilemma that has long plagued space strategy based on technology defending technology seems to have been reinvigorated.

Confusion about U.S. space strategy began in 2013 after China tested what it said was a scientific sounding rocket to an unprecedented high-altitude orbit. The Pentagon and intelligence communities saw it as a test of ASAT capabilities potentially threatening the self-proclaimed U.S. “sanctuary orbit” where a number of high-value “exquisite” satellites are positioned. The Chinese launch prompted a Strategic Space Posture Review “which subsequently boomeranged U.S. space strategy back-to-the-future of 2007 and the technology-oriented, we’re-ready-to-fight approach, from the strategic restraint approach that had prevailed earlier in the Obama administration.” Under strategic restraint, the U.S. had restrained from introducing offensive capabilities in the hopes of moderating the behavior of both friends and potential foes.

While the 2007 approach fits well with Trump Administration rhetoric that America, and the military, is broken and must be fixed, and the eager military-industrial complex, “we can build anything if you keep the money coming” arrogance that has worked so well for missile defense, it does not inherently, or even likely, make American space assets any safer. Hence General Hyten’s apparent need to beat war drums in one speech and then retreat in the next, or when all else fails, obfuscate.

Obfuscation has had a deliberate and sometimes useful role in U.S. space strategy for many years. With the vast majority of space technology being dual use, meaning of value to both the civil and military space communities and with difficulty in discerning whether the military technology is for offensive or defensive purposes, defining a space weapon has been challenging, or impossible according to arms control critics. Those critics argue that what can’t be defined can’t be controlled. But consequently, the U.S. has resorted to Orwellian double-speak techniques to avoid crossing the Rubicon of overtly stating that it is developing space weapons.  Instead, the US has developed “counter-space capabilities” to defend U.S. assets. Going to that length has evidenced a desire not to cross the space weapons Rubicon.  Whether that is still true is increasingly less clear. In Hyten’s remarks during his Senate testimony, he is clearly talking “offensive” technology, regardless of purpose.

Remarks by Deputy Defense Secretary Robert Work regarding space control have added to confusion and speculation about U.S. intents, as space control is a broad and somewhat ambiguous concept. As defined by Air Force space doctrine:

It is often used in conjunction with a perceived need, or desire, for the U.S. to “dominate” space. There is a “domination” analogy that draws from the U.S. “dominating” air space during conflict. But dominating air space has geographic and time limitations, while dominating space through space control has no similar boundaries. So while it is likely unachievable, it is provocative.

If, as General Hyten said in January, the U.S. strategy is one of deterrence, deterrence requires clear communication of goals and expectations.  Regarding expectations, the U.S. has said repeatedly that it expects China and Russia to be “responsible space actors.”  What it has not done is to define what that means.  Is the United States the model responsible space actor?  If so, a responsible actor can have a full range of military and civilian space programs, including ASAT capabilities such as maneuverable satellites, lasers, and kinetic impact capabilities tested through missile defense programs, a human spaceflight program that enhances its military capabilities through features such as tracking stations, a space warfighters contingent within the military and space warfighting doctrine. If not, then the U.S. space strategy is one of “do as I say, not as I do,” which generally is not sustainable in the long term.

The tyranny of distance makes space security an inherently precarious and ambiguous task.  If a spacecraft suddenly stops operating dangerous speculation will ensue as to why, especially during a period of tension or outright conflict. That makes lines of communication and clear communication imperative, to avoid miscalculations and mistakes with potentially catastrophic unintended consequences.

It is in the interests of all spacefaring nations to not fight a war in space.  Those who argue its “inevitability” based on land, air, and sea having become warfighting domains fail to recognize the differences between the domains, especially that there are no natural boundaries, firebreaks, to contain the fighting in space as there are terrestrially.  It is in every country’s interest to pursue ways to enhance communication and clarify expectations of responsible actors in space with as much vigor as they do contingency warfighting plans and the development of new warfighting technologies. That, unfortunately, has not been the case, even though the last two years have seen more progress in diplomatic space efforts through the Committee on the Peaceful Uses of Outer Space than any other time prior.

Chaos and inconsistency, intermixed with chest thumping and pullback, seems the currently preferred approach to U.S. strategy, across the board.  Space is no different. The unintended consequences will undoubtedly come home to roost, the question is simply when.

Space CooperationSatellite ProgramDonald Trump
printTweet
You might also like
Back to Top
CHINA US Focus 2018 China-United States Exchange Foundation. All rights reserved. Disclaimer