China and the U.S. Must Cooperate on AI 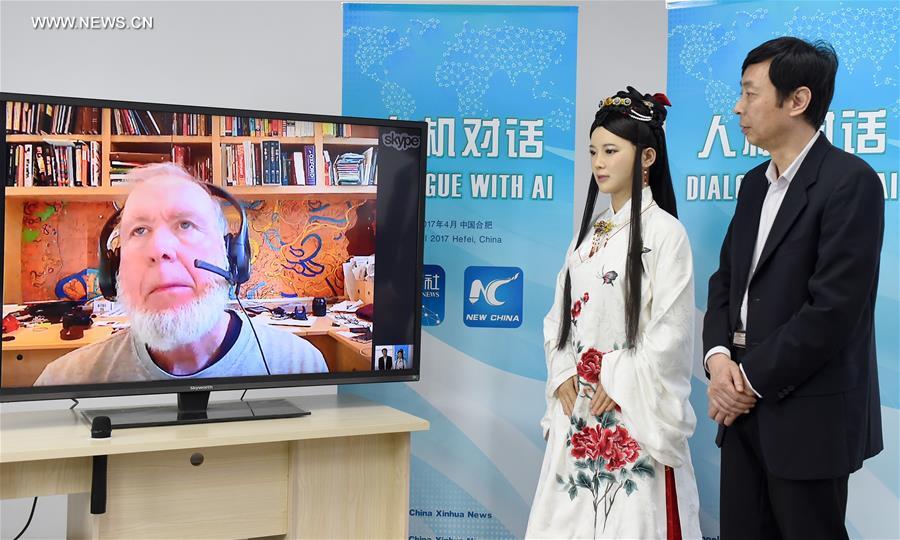 Chen Xiaoping (R), director of a robot research and development team, and Jia Jia, an interactive robot that looks like a real Chinese young woman in traditional outfit, talk through internet with Kevin Kelly on screen, founding executive editor of Wired magazine, in Hefei, capital of east China's Anhui Province, April 24, 2017. Jia Jia was invited as a special reporter of the Xinhua News Agency to conduct the man-machine dialogue with Kelly on Monday. Jia Jia was unveiled in 2016 by Chen's robot research and development team at the University of Science and Technology of China in Hefei. It took the team three years to research and develop this new-generation interactive robot, which can speak, show micro-expressions, move its lips, and move its body. (Xinhua/Guo Chen)

On 20 July 2017, the State Council of China published the Development Plan for the New Generation of Artificial Intelligence (AI), which clearly sets the direction and key objectives of AI development in China. The government believes that AI is important for China to become a powerful nation in technology and innovation, as well as in cyberspace. In recent years, governments, businesses, and research institutions of all countries have increased their investment in AI, viewing it as the next leading sector.

The reason behind the fascination with AI is that it has incomparable potential to change things. First, it may greatly increase productivity. With a combination of cloud computing, big data, and the Internet of Things, AI will bring about a new productivity revolution based on information. It will help free humans from inefficient and low-skilled physical and mental work, which will change the traditional relations of production. Some countries might unlock a new round of rapid economic growth by unleashing enormous tech dividends. Secondly, AI might reshape the existing social architecture. For example, the extensive use of self-driving cars will require changes in infrastructure, law, and ethical ideas, as well as in the mindset of city designers and administrators. Finally, AI might promote military reforms. Military robots will drastically reduce the cost of war and widen the power gap between the developed and developing countries. It will redefine what war looks like in the future.

On the other hand, AI also involves numerous risks. The first risk is from fraudulent data. With the help of AI, huge amounts of fake pictures, documents, audios and videos can be forged within a short period. This fraudulent data, which will be hard to detect, might have disastrous consequences after being spread on the internet. The second risk brings up fundamental questions of legality and morality. The international community has yet to adopt any AI-related regulations so far. AI is not absolutely neutral or objective - the relevant parameters are set by humans, reflecting the designers’ ideas. There is still a big debate on whether autonomous weapons will be able to make independent judgments. These weapons are inconsistent with the existing international legal regime governing wars, including the Geneva Convention. The third risk involves employment and poverty. The productivity rise as a result of AI might lead to persistent unemployment, increase extreme poverty, and cause social unrest. The rich might be adept at reaping the benefits of new technologies such as AI, robots, and big data, further widening the wealth gap. The fourth risk is an arms race. With military robots developing by leaps and bounds and drone sales leading the global arms market, the advent of AI might trigger an arms race, particularly among small and medium sized countries.

Globally, United States and China are the two biggest players in AI. The two countries have excelled in the basic research, technology and application of AI, covering areas like education, medicine, and finance. US tech giants like IBM, Google, Microsoft, and Facebook are global leaders in technology, while Chinese businesses are quite capable in fields like image and voice recognition and self-driving cars. Both countries have large numbers of AI start-ups. On the AI 100 List 2017, a list of the 100 most promising AI companies published by CB Insights, a data analysis firm, 59 are from the United States and 27 from China.

Given their respective status, cooperation between China and the United States in AI is crucial. That said, competition between the two is also inevitable. At present, cooperation far outweighs competition. US companies generally focus on basic technologies, while their Chinese counterparts are more committed to application. Thus, a “US-designed and Chinese-made” cooperation model has been formed. At the same time, the two countries also have misgivings of and misunderstandings with each other. First of all, the United States is concerned about losing its absolute advantage. Some US commentators have expressed concern that as their country reduces its research funding and China increases its own support, the United States will have difficulty keeping its edge. Second, the militaries of the two countries are competing fiercely. The New York Times reported that China is quickly applying AI to military purposes. Third, the United States worries about brain and technology drain. Chinese tech firms like Baidu and Tencent are increasing investment in US AI companies, luring high-caliber talents and setting up AI labs in the United States. The worries have grown into strategic misgivings. Some US experts suggest applying greater scrutiny over Chinese investments in the United States, and preventing Chinese businesses from acquiring or investing in certain US companies. Some even suggest efforts should be made to stop Chinese scholars from publishing articles in American academic journals so as to make Chinese technologies and patents less visible. On the other side, China is worried that the United States might extend its Internet hegemony to AI, and might be more cautious about American businesses collecting social data in China.

If such misunderstandings and misgivings continue to grow, AI is likely to become another point of contention in China-US relations, instead of an opportunity. This will not serve either country, and may set a bad example for other countries. The two countries should take measures to combat this.

Based on the experiences and lessons from China-US cyber security, we suggest that the two countries jointly promote cooperation between their AI sectors. It is important to foster the habit of cooperation early at the technological development stage, and to work to remove misgivings and manage differences. The two countries may come to an agreement to open their markets, and reduce the political factors hindering investment. The private sector plays a major role in AI research. Yet the role of the government is to provide necessary support to cash-strapped basic and long-term research that catches little private interest. The government should also learn from the new technologies of other countries.

Both governments need to manage the threat of AI militarization. China and the United States should realize that the weaponization of AI will bring the risk of an arms race and weapons proliferation. They need to reduce the probability of these weapons finding their way into the hands of terrorist groups or rogue states. The two countries need to set up restrictions, regulations, and international cooperation mechanisms on AI weaponization, and lead international communication and cooperation in this filed.

Lastly, the two governments need to promote the development of international rules on AI. The two countries need to work together to reduce the harmful impact this technology may have on society and prevent the emergence of a “digital divide” caused by AI. They need to help less-developed countries and poor people adapt to and use this technology.