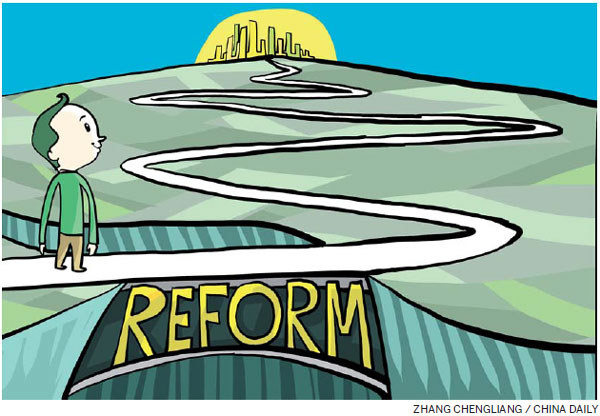 Recently, some Westerners have been perplexed by media reports about the mergers of Chinese state-owned enterprises (SOEs). Many have explained these as a retreat from market-oriented reforms. Is that true? To make a fair assessment of the matter, one must take a look at the three stages of SOE reform.

Prior to these reforms, China had operated as a Soviet-style, highly centralized, and planned economy. In the period of 1978 to 1992, China began its initial explorations down the road of SOE reform. In Fujian province, where President Xi Jinping once worked, 55 factory heads jointly presented a letter in 1984 calling for more autonomy in day-to-day management and freedom from rigid annual plans. What this letter called for was precisely what the reforms focused on at the time – adjusting relations between the State and the enterprise: giving the latter due autonomy and linking enterprise performance to workers’ material interests. The “pusher” behind such exploration was the fact that the national economy was on the brink of bankruptcy. Given the experimental nature of such moves, reforms during that period shared a clear trial-and-error characteristic.

Beginning in the 1990s, the collapse of the Soviet Block dealt a heavy blow to China’s highly centralized planned-economy regime. Quarrels surrounding planning and market strategy were fierce in Chinese society, and ideological wrangling over whether reforms were more “capitalist” or “socialist” seriously disrupted implementation of SOE reforms. Due to the confinement by the central planning regime, SOEs found themselves bogged down in high debt ratios, heavy non-corporate burdens, back-breaking mandatory apportions, low worker morale, and enlarging, even nationwide, losses. Even private and overseas-funded firms, who had risen rapidly, ran into obstacles because of the undesirable ideological labels they carried.

An important driver for SOEs to further pursue reform was the need for survival. Yet even with this imperative, SOE reforms might not have entered a second stage without then leader Deng Xiaoping’s resolve and decisiveness. The real milestone during this period was that the Chinese government realized there were two problems to be tackled: first that a true corporate governance structure was indispensable for SOE reform; and second, that direct fundraising had to be developed through a capital market, a process the Chinese government called establishing a “modern corporate system.”

Xi Jinping kickstarted the third phase of reforms soon after assuming leadership of China’s “leading group for deepening reforms.” All actions taken thereafter are based on three core concerns: classification and reorganization of SOEs, asking SOEs to establish a corporate governance structure by 2017, and promoting mixed ownership. A timetable has been established to accomplish all three. China has thus put an end to the state of chaos and stagnation by upgrading products and industries, securing capital supply for production and reproduction, and handling labor-capital ties.

The three phases of SOE reforms, particularly the aggressive headway made in the past five years, boil down to an attempt to truly dovetail Chinese SOEs with a market economy, which is a fundamental policy orientation that has nothing to do with backpedaling on promises of reform. The tortuous path of Chinese SOE reforms illustrates the haunting legacies of the Soviet-era regime, extreme imbalances in the national economic landscape, tough ideological barriers concerning the nature of corporate governance and the role of workers, and, of course, resistance from vested interests. But the trend is irreversible. The introduction of overseas capital and the increased outflow of domestic funds both call for a necessary acceleration of SOE reforms. The tough governing style of Xi Jinping will no doubt make it easier to introduce and protect the overseas capital that is crucial to fulfill these reforms.

China’s EconomyEconomic Reform
printTweet
You might also like
Back to Top
CHINA US Focus 2018 China-United States Exchange Foundation. All rights reserved. Disclaimer