China’s “Bare Sticks” Holiday and its Latest Version of Consumerism

One day, when I was browsing winter boots on my phone while riding a bus, a woman behind me touched my shoulder, asking which website it was – she needed a new pair of black riding boots. “It’s called ‘Gilt,’ and it makes you feel guilty indeed,” I told her, jokingly.

I am embarrassed to confess that, since Black Friday, I have bought a down jacket, a sweater, a pair of pants, a shirt, cosmetics, and a knitted hat and mittens—needed to brave the Chicago winter (well, maybe excluding the cosmetics).

It is pretty difficult to resist the ubiquitous marketing push for holiday shopping that has been expanded from a single Black Friday to months of non-stop promotions.

Born in 1990 on China’s coast, I grew up with booming consumerism and materialism in the country. My friends and I didn’t suffer from the hunger, poverty, or lack of education that our parents, grandparents—and many of our peers from inland China did. For the most part, we have taken the abundant food, clothing, toys, and everything else for granted.

Since a very young age, we have been hard-wired to view Western brands as symbols of prestige and quality. Wearing them carries a particular whiff of socio-economic status. In junior high and high school, we’d only wear Nike or Adidas sneakers—never Lining, their Chinese competitor. Later, I moved to the United States for college. My friends and relatives would ask me to buy all sorts of items, ranging from designer bags to luxurious cosmetics, from sportswear, to health and nutrition products. I’d carry all these products on my annual trip back to China.

If what’s being pushed today is the global ideology of consumerism, China definitely is exhibiting the latest version—if not the strongest—of that ideology.

The Chinese have invented a self-adsorbed holiday without any cultural or religious connotations, just for shopping. 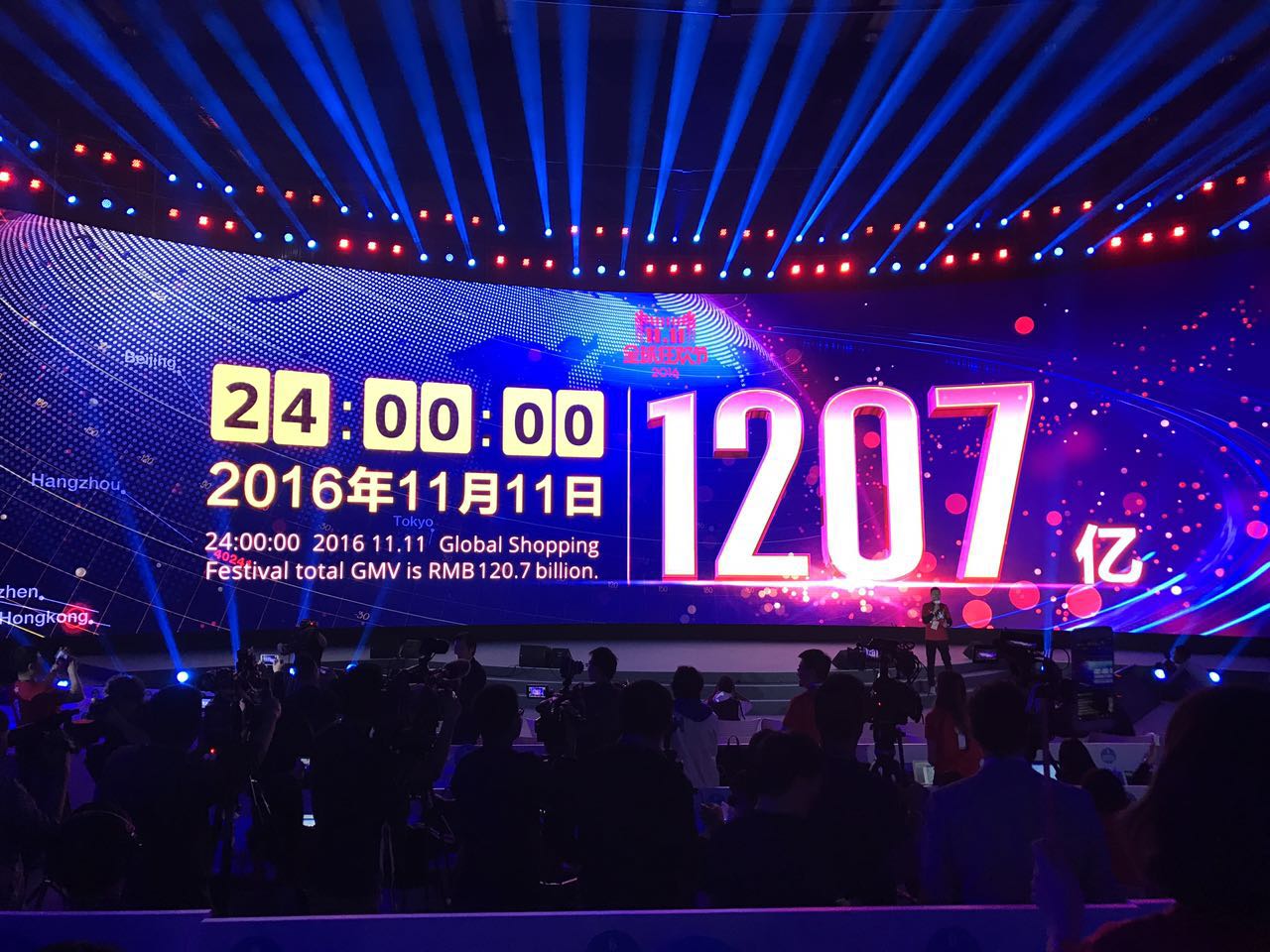 Within the first five minutes, Chinese customers had spent $1 billion on popular shopping platforms like Taobao and Tmall, both under Alibaba Group Holding Ltd, one of the world’s biggest e-commerce companies. Vendors sold some$17.7 billion worth of goods when the clock struck midnight Saturday in China—up 24 percent from last year's record haul of $14.3 billion, but lower than the 54 percent increase last year.

Singles' Day in China began as a clever counter to Valentine's Day. It takes place each year on Nov. 11, or 11/11, meaning four singles. Originally a celebration for young singletons, Alibaba has turned it into a shopping bonanza since 2009.

Other online platforms piggybacked off the idea with international retailers and brands, including Macy's, Costco, Apple and Nike, offering deals on everything from nuts to smartphones.

Alibaba's rival, JD.com—China’s equivalent of Best Buy—reported it received 78 percent more orders in the first 12 hours of trading Friday than it had during the same period in 2015.

My high school classmate, Cai Hanji, an accountant from Alibaba’s birthplace Hangzhou of China, told me she spent $588, nearly half of her monthly salary, on dresses, purses, groceries, and household supplies on Alibaba's Taobao on Nov.11, a spending routine she has kept for three years.

She said she couldn't resist the promotional push and shopping atmosphere virtually everywhere in her city.

On the day (what she calls a “national shopping frenzy”), Cai said she noticed many passengers shopping on their mobile phones on their subway commutes.

At least one billion parcels are expected to be generated from the sale event for delivery, 35 percent more than last year, China'sState Post Bureau estimated. In particular, rural China saw a surge of parcel deliveries, Deputy Director Jun Liu told state news agency Xinhua. Many delivery companies hired thousands of temporary workers, and even robots, to ease the burden.

The shopping atmosphere could even be felt in the United States, albeit on a much smaller scale. Many online shopping sites, from department stores like Bergdorf Goodman to small boutique shops like Need Supply Co., offered 11-percent-off deals on Friday.

Karl Gerth, an expert on Chinese consumption at the University of California, San Diego, said that the Single’s Day symbolizes China’s shift from an export-driven, manufacture-driven economy to a domestic-consumption one.

“China is attempting to build a domestic consumer-driven economy rather than an economy driven by government spending on bridges to nowhere,” Gerth said.

In fact, the sales surge on Singles’ Day might be the result of the slow economy, Gerth added.

“You wait to look for the best possible bargain,” he said. “And you feel like it’s crunch time if you are financially strapped.”

Unlike in the U.S. where people are supposed to buy and give on holidays, Gerth said, the Chinese—especially the young—shop for themselves, which goes against the stereotype of a lack of individualism and the family-oriented value in China.

“You could say they are creative pushbacks against those ideas,” he said. “‘Merry Christmas’ doesn't mean go and buy yourself something.”

Going back 30 years, the Chinese used to own and buy nothing, I recall vivid stories told by my parents and grandparents how they lived through famine and poverty.

In the late 1970s, China's most ambitious urban consumers would save for the so-called “three big items” (san dajian): the wristwatch, sewing machine, and bike. The “three big items” gradually were shifted to the color TV, refrigerator, and washing machine in the 1990s. Since then, the material items have grown so profusely that the phrase is now outdated.

My family never imagined they would be able to send me abroad to study and experience the first-world consumerism on holidays that vaguely have any relation to them.

Globalization has taught billions of Chinese people that the best way to find emotional satisfaction is buying something for themselves.

“Why shouldn't Chinese get to do the stupid stuff first world countries do?” Gerth quipped.

Gerth said he wouldn’t be surprised if the Single’s Day holiday shows up in the U.S. one day.

“I would consider this as an example of cutting-edge consumerism,” he said. “You invent a holiday in which people are encouraged people to buy something for yourself.”

But about what else do we care beyond material? Chinese intellectuals often lament about young people’s lacking of idealism or spiritual needs these days. EvenGerth said he was impressed by the capitalism’s ability to take idealistic youth and turn their dreams to something marketable.

I once asked a foreign correspondent on a reporting trip if she thought the Chinese millennial would make changes in China by shaking up the status quo—or at least try to. She gave a definite “No.” She said the young Chinese are all about material items and that all they want to do is to “buy, buy, buy,” and they have the least interest in doing any social good.

Her comment sounds like a sweeping generalization, but I do agree with her, thinking of friends and myself.

Looking around my classroom in Chicago, I spot outfits and accessories from Chanel, Christian Dior, Burberry from my Chinese classmates who are just out of college. My American peers are much more “low-key”.

Rarely do I find myself in discussions with my Chinese friends about issues any bigger than the trivial goings on in our lives. It is not trendy to post articles or personal opinions on serious social issues or public affairs on most people’s WeChat moment walls—the almighty Chinese social media tool that is a combination of Facebook, Twitter, and Instagram and more. It is definitely unpopular to talk about dreams and big plans. Money, salaries, brands, cars, apartment prices and new “chi-chi” restaurants or products are more proper topics if you want to maintain the status quo in both real and virtual lives. So inevitably, the WeChat moments look like glossy magazine covers showing off the delicious food we just ate, the luxurious properties we own, the awesome lives we lead, and the amazing people we hang out with.

Alas, as hard as I try not to live in vain, I find it difficult to get far from this part of my upbringing, to avoid being influenced by the consumerist and materialistic values.

My American professor used to “scold” me for having too many pairs of shoes—I had about 25 senior year—barring me from buying new ones after I moved back to the U.S. in September for graduate school. I have downgraded my shoe collection to 13 pairs over the past two years, thanks to constant moving; but it is still too big a number to her.

“You only need two pairs,” she would tell me.

China’s EconomyAlibaba
printTweet
You might also like
Back to Top
CHINA US Focus 2018 China-United States Exchange Foundation. All rights reserved. Disclaimer