Despite the apparent tranquility of this year’s spring meetings of the International Monetary Fund and World Bank, there are reasons to be concerned about the global economy. The United Kingdom’s impending “hard” Brexit from the European Union and US President Donald Trump’s anti-globalization agenda are creating economic uncertainty, and will continue to do so for some time. 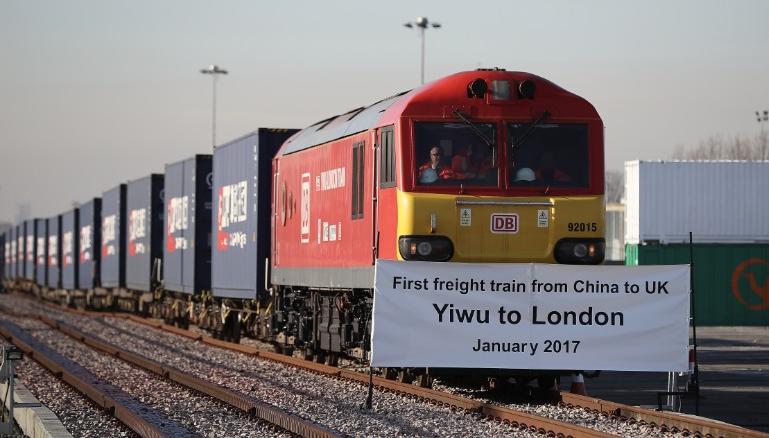 In contrast to Trump, Chinese President Xi Jinping has come to the defense of globalization, and made new capital available for creating global pubic goods, enhancing connectivity, and creating jobs in developing countries. More than 60 countries have welcomed Xi’s “One Belt, One Road” initiative, and 28 heads of state will attend an OBOR summit in Beijing on May 14. So, what is China’s rationale for pursuing this grandiose vision – one that so many countries, especially in the developing world, have embraced?

In our new book, Going Beyond Aid: Development Cooperation for Structural Transformation, we argue that official development aid (ODA) need not always be concessional, and make the case for going “beyond aid,” toward a broader approach – like that taken by China – that includes trade and investment. Right now, the OECD’s definition of ODA does not even include some of the more effective instruments for facilitating structural transformation in recipient countries, such as equity investment and large non-concessional loans for infrastructure.

By combining aid with trade and investment, donor and recipient countries alike can benefit. For example, the South-South development cooperation uses all three activities to capitalize on recipient countries’ economic strengths. This allows the SSDC to avoid the bottlenecks in partner countries that one sees under the standard ODA model, which separates aid from trade and private investment – and thus impedes countries from exploiting their comparative advantages.

In our book, we look at this topic through the lens of New Structural Economics. NSE treats modern economic development as a process of continuous structural change in technologies, industries, and hard and soft infrastructure – all of which increases labor productivity, and thus per capita income.

According to NSE, the most effective and sustainable approach for a low-income country to jumpstart dynamic growth and development is to develop those sectors in which it has latent comparative advantages: where production costs are low, but transaction costs are high due to inadequate hard and soft infrastructure. Governments can help to reduce transaction costs by creating special economic zones or industrial parks, improving infrastructure, and making the overall business environment more attractive in those enclaves. With this approach, a developing country can grow dynamically, and create a virtuous circle of job creation and poverty reduction, even if its overall infrastructure and business environment are still lacking.

China has a clear comparative advantage in infrastructure construction, owing to its lower labor costs (the cost of a project site foreman in China is one-eighth that of OECD countries) and vast domestic market, which have enabled it to achieve economies of scale that other countries simply cannot. Consequently, the overall construction cost for high-speed rail in China is two-thirds of what it is in industrial countries.

But China’s comparative advantages in 46 of 97 subsectors – particularly in manufacturing – benefit other developing countries, too. As labor costs in China rise, labor-intensive industries are relocating to lower-wage developing countries, providing millions of job opportunities. For example, the Huajian Shoemaking Company, C&H Garments, and China JD Group (an apparel maker), are now operating in special economic zones in, respectively, Ethiopia, Rwanda, and Tanzania.

In addition to exporting its comparative advantages, China also deploys “patient capital,” which has a maturity of ten years or more. In a recently published paper, we conceptualize patient capital as an investment in a “relationship,” whereby an investor has a long-term stake in a country’s development. Patient-capital owners are like equity investors, but they are willing to “sink” money in the real sector for an extended period of time.

Patient-capital owners are also more willing, and better able, to take risks. In the chart below, we show that a country’s net-foreign-asset position correlates strongly with its long-term orientation. On the other hand, net-foreign-asset positions of countries with a short-term orientation and a low savings rate tend to deteriorate, while their foreign debts mounts. 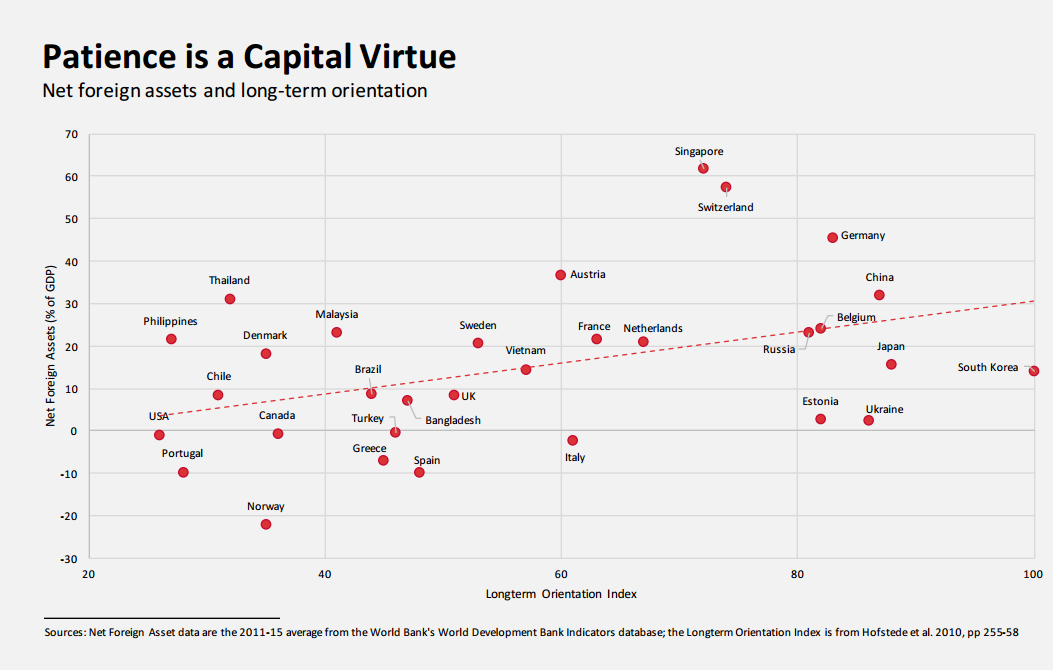 Patient capital plays an important role in infrastructure financing, because it is often accompanied by technological and administrative know-how, which helps to improve global connectivity and accelerate development.

So far, China’s large reserve of patient capital has been used to finance its own domestic projects. But it will increasingly be exported as more Chinese enterprises and banks “go global”. In fact, China could soon become the world’s largest net creditor, and a portion of its net foreign assets will take the form of patient capital that is suitable for improving infrastructure, developing manufacturing sectors, and creating jobs around the world.

Since 2015, development finance has started to come less from traditional aid, and more from development-finance institutions, development banks, and sovereign wealth funds in emerging economies. China, for example, has committed $60 billion in development financing to Africa for the 2016-2018 period – much of it patient capital.

China and other emerging economies are also shifting from bilateralism to multilateralism, by working with partners from the global North and South. As new South-led institutions such as the Asian Infrastructure Investment Bank and the New Development Bank work with established multilateral development banks, they are learning to be better partners, and adding momentum to global development efforts.

China, moreover, is trying to learn from its partners so that it can improve its own governance, labor, and environmental standards. And this two-way process is giving rise to new ideas, theories, and concepts – our book being one of them. China’s embrace of a global role should be welcomed. We are cautiously optimistic that the North and South can work together to ensure peace and prosperity for all.

China’s EconomyEconomic Development
printTweet
You might also like
Back to Top
CHINA US Focus 2018 China-United States Exchange Foundation. All rights reserved. Disclaimer