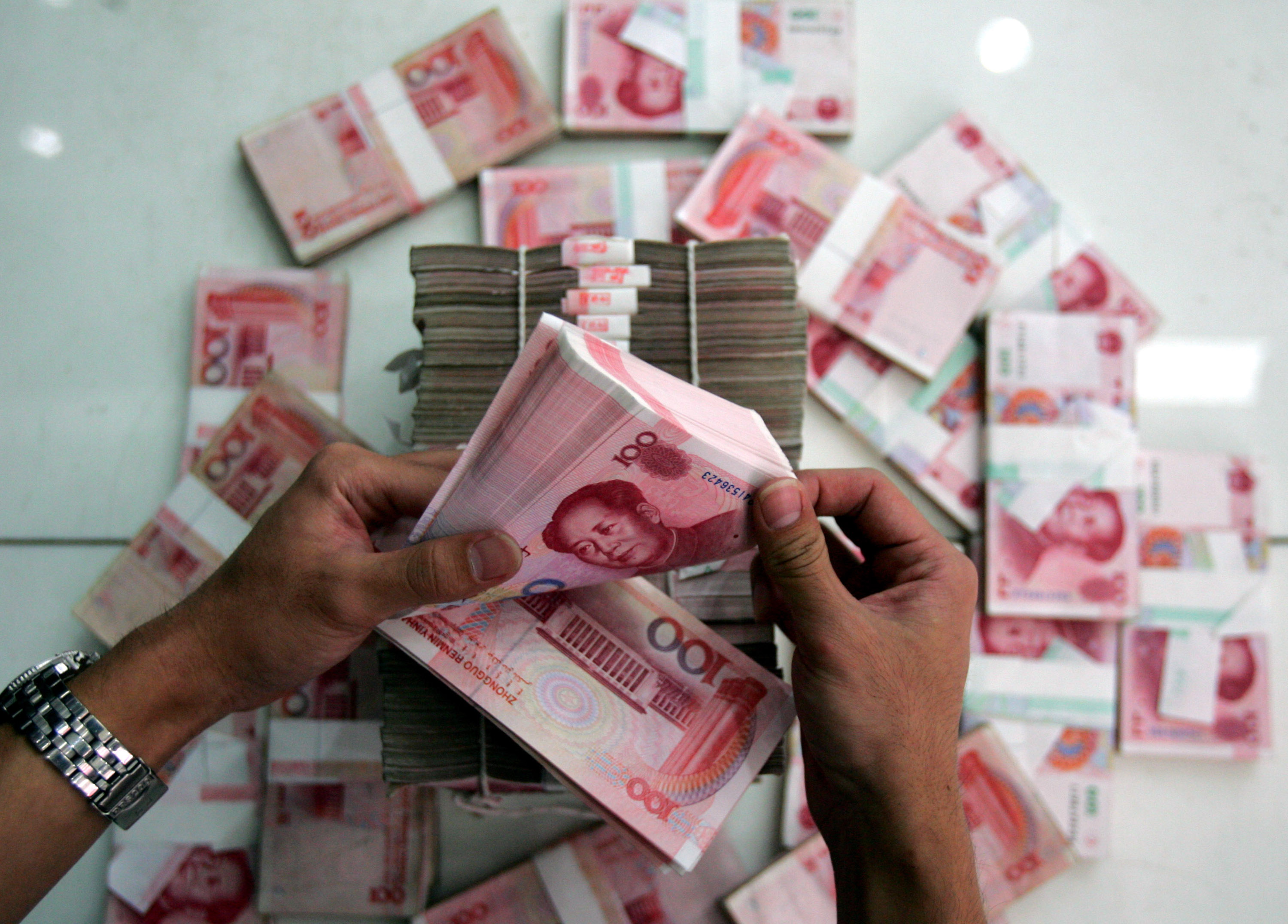 Moody's Investors Service recently downgraded China's sovereign credit rating, the first time since 1989, changing at the same time its outlook for the Chinese economy from stable to negative.  It also downgraded Hong Kong on the basis of its close economic relationship with China.  Are these downgrades justified based on economic fundamentals?

First of all, the bulk of China’s sovereign debt, more than 99 percent, is denominated in Renminbi.  The Chinese Government should have no difficulty in meeting the obligations on its sovereign debt, just as the United States Government, with a public debt to GDP ratio that approaches 100 percent, should have no difficulty in meeting its obligations on its sovereign debt, which is all denominated in U.S. Dollars.  Chinese central government debt is only approximately 20 percent of its GDP and even Moody’s predicted that it would only go up to as high as 45% by 2020.  Both China and the U.S. can simply print more of their own respective money to service their respective debts.  (The same is true of Japan, even though it has a public debt to GDP ratio of around 250 percent.  Greece cannot do so because its debt has to be repaid in Euro which it cannot print at will.)  Thus, to the extent that the credit rating should reflect the ability to service the debt, there has been no substantive change in China.  (That is also why I believe the downgrade of the U.S. credit rating by Standard and Poor some years back was not warranted.)  Moreover, unlike the U.S. public debt, the vast majority of the Chinese public debt is held by Chinese nationals, so that even if they were to sell the Chinese debt, most of the money would remain in China and it would have little impact on the foreign exchange market or the Renminbi exchange rate.  In a way, it is like intra-family debt.  The son borrows from the father.  When the father demands repayment from the son, the son asks the mother for the money, and the mother in turn asks the father for the money, thus completing the circle.  This circular arrangement can be sustained indefinitely, especially if the rate of interest is low, as the Japanese experience over the past quarter of a century demonstrated.

Second, the credit ratings given by credit rating agencies have not been useful predictors of economic and financial stresses to come.  Did any credit agency foresee the 2008 collapse of Lehman Brothers and the ensuing Global Financial Crisis?  Did any of them foresee the European Sovereign Debt Crisis?  A credit rating agency typically changed its rating after the fact, but not before, when it would have been much more useful.  Have credit ratings been useful to potential investors?  My view has always been that if the analysts at the rating agencies are really that good, they should be out there investing for asset management firms and making real money instead of simply doing the ratings.  Then why is there still a demand for credit ratings, and for crediting rating agencies to supply them?  That is because most asset managers want some protection, an acceptable excuse, if they wind up losing money for their clients.  Their typical defense would be: “This firm was rated AAA.  What do you expect me to do?  Besides, all the other asset managers also bought the bonds of this same firm.”  There is certainly safety in numbers if one makes mistakes.

Third, it is true that the Chinese economy has entered a “new normal”, and that its annual rate of growth has declined from near double digits to around 6.5 percent today.  But this has been going on since 2010.  Why did Moody’s change the credit rating now, when the economy, the Renminbi exchange rate, and other economic indicators have all seemed stabilized?  One concern is whether there is sufficient aggregate demand to sustain the growth of real GDP.  There is no doubt that China has excess capacity in almost all of its traditional manufacturing industries such as steel, cement, glass, aluminum smelting, solar panels, ship-building, and even coal mining--you name it.  However, this problem has been receiving the attention of the Chinese Government—the excess capacities are being reduced in an orderly way and the structural supply-side reform is implemented to prevent the recurrence of the excess capacities.  However, the existing excess capacities are themselves a silver lining--if there is aggregate demand, there will be supply.  Supply is not a constraint to the growth of aggregate output.  The challenge is finding the appropriate source(s) of aggregate demand—neither exports nor fixed investments in traditional manufacturing industries are economically viable sources of growth of aggregate demand.  Instead, the economy must rely on fixed investments in basic infrastructure and in public goods provision, such as environmental preservation, protection, and restoration; education; healthcare; and elderly care.  Cleaning up the air, water and soil in China can create a great deal of aggregate demand and require a great deal of resources.  And the Chinese Government is uniquely able to mobilize resources to achieve the goals that it sets.

Another concern is the level of total debt in the economy.  Some reports suggest that the total debt to GDP ratio in China has been growing rapidly and approaches 300 percent!  This figure is severely over-stated.  Chinese central government debt is a very low approximately 20 percent of GDP.  Chinese household debt is also very low as a percent of GDP.  The focus is therefore on the contingent liabilities of the central government.  These would include provincial and local government debt as well as state-owned-enterprise (SOE) debt.  Official total provincial and local government debt is also not very high—it is approximately the same order of magnitude as the central government public debt.  So it should likewise not be a major source of worry.  The foreign observers are actually concerned over the SOE debt.  However, the centrally controlled SOEs collectively have significant positive net worth and positive market capitalizations and their debt should not be regarded as the same as public debt, which is not backed by any marketable assets.  Moreover, because of the rising prevalence of shadow banking, total enterprise debt is over-stated because of the failure to net out inter-enterprise debt.  For example, a Chinese bank may lend to a centrally controlled SOE because it is perceived to be safe.  But many Chinese SOEs have no good investment projects in their industries, and so they re-lend the funds to perhaps a trust company, marking up the rate of interest to earn a spread.  The trust company in turn lends the money to a private enterprise that may need the money, marking up the rate of interest even more.  In this process, total net enterprise debt is not increased, but gross debt has tripled.  This double- and triple-counting accounts for a substantial part of the recent increase in gross enterprise debt.  The net enterprise debt to GDP ratio is actually no higher than if the bank lends directly to the final borrower.  This is not to say that the rise in the leverage ratio due to shadow banking is not a problem.  It is, but it is not as serious as it may sound superficially.  The final borrower does need to pay a much higher rate of interest, which may lead to a higher probability of loan default.  Other forms of shadow banking have similar implications on the gross debt to GDP ratio.  One ready way to stop this form of shadow banking is to require the banks to disburse loans on the completion method and only for the intended purposes, leaving no room for diversion of the funds to be re-lent to another borrower.  Finally, it is doubtful whether the Chinese central government will feel obligated to assume the liabilities of all Chinese SOEs, let alone all Chinese enterprises.  An important example to remember is the bankruptcy of Guangdong International Trust and Investment Corporation (GITIC) in 1999.

Yet another concern is the decline in the Chinese working age population.  However, it is also important to remember that the current definition of working age population in China excludes women over 55 and men over 60.  These mandatory retirement ages were set in the 1950s and have not been changed even though life expectancies have increased by more than 20 percent since then.  By simply changing the mandatory retirement ages for both women and men to a common 65 (with an option for people already 55 or above during a transitional period), the working age population can be increased by approximately 15%, which should be sufficient to sustain the labor supply until the effects of the recently adopted “two-children” policy kick in.

In conclusion, I believe the Chinese economy remains stable and controllable and an average annual rate of growth of 6.5% should be feasible and in fact likely over the next five years.  There is little basis to justify Moody’s downgrade of the credit rating of China and therefore also that of Hong Kong.