Tigers of the East and Bulls of the West—US Shares Have Peaked, Will China Follow?

The performance of Chinese and U.S. shares are rarely compared side-by-side. Together though, they tell the story of the gains that have been available to investors over the past decades, in what are now regarded as the two largest economies—and most capitalised stock markets—in the world. The possibility of a long-term, stable upward trajectory in share prices is a crucial goal for Chinese regulators and proponents of liberalisation of the Chinese share markets. If the relationship between cost of capital, capital gains and share prices are of any concern, management and shareholders of all kinds will also be desirous of this outcome. The U.S. provides the prime example of how such markets and policies, in conjunction with a strong real economy, have contributed to improved welfare over the long-term time horizon.

On the 31st of March, 2017, the S&P500 index of shares in the U.S.’ leading firms posted a new record high for the month, the quarter, and indeed, all time. Near term, however, a lower closing price than at the start of the month of March was recorded. The ticker tape therefore shows both profit takers and short sellers in tentative control from the end of the final moon cycle of Q1, 2017, for the first time in five months, a clue to a bear market.

As we enter Q2, some market making institutions, like BNP Paribas, have already predicted that shares in the developed west are due a corrective period imminently. Other finance sector companies, e.g. Fidelity, have reported to their investors of a longer term bullish outlook. The quarter, however, has also seen gold prices thrive, suggestive of investors going into safety—leaving the paper boat and stocking the vaults with mined treasure before the storm occurs.

Moreover, the notion that western shares seem overvalued relative to microeconomic (firm-level) performance projections—encompassed by the recent continuation moves upwards in share prices—is plausible given the macroeconomic (national economy) predictions of the Federal Reserve Board and Bank presidents for the U.S. economy in December 2016, which were modest. The Fed projected a maximum of 2% gross domestic product (GDP) growth by 2020, and in the longer run, accompanied by unemployment and inflation figures set to rise marginally over the next few years to 4.5% or more and 2% respectively, running alongside predicted interest rate hikes of about 5 basis points per annum.

While being criticised for their failure to reflect mediocre changes to fundamentals, the insatiable appetites for developed country shares from 2009 have led to one of the most persistent series of multilateral bull market (upward) swings, and thus opportunities for developed country investors to make capital gains in recent history.

Surprisingly to some, this success story began soon after the significant global financial crisis (GFC) market collapse. In the aftermath, institutions clearly began building positions again, from February 2009 when the market bottomed out in a lot of cases. The last eight years have generously lent the NASDAQ gargantuan gains of over 430% from the lows, the S&P500, 135% from the lows, and the Dow-Jones 30, 227%, the FTSE100 also boasting new record highs this quarter. Institutional traders and individual wealth builders have thus been able to enjoy dramatic returns over this period. 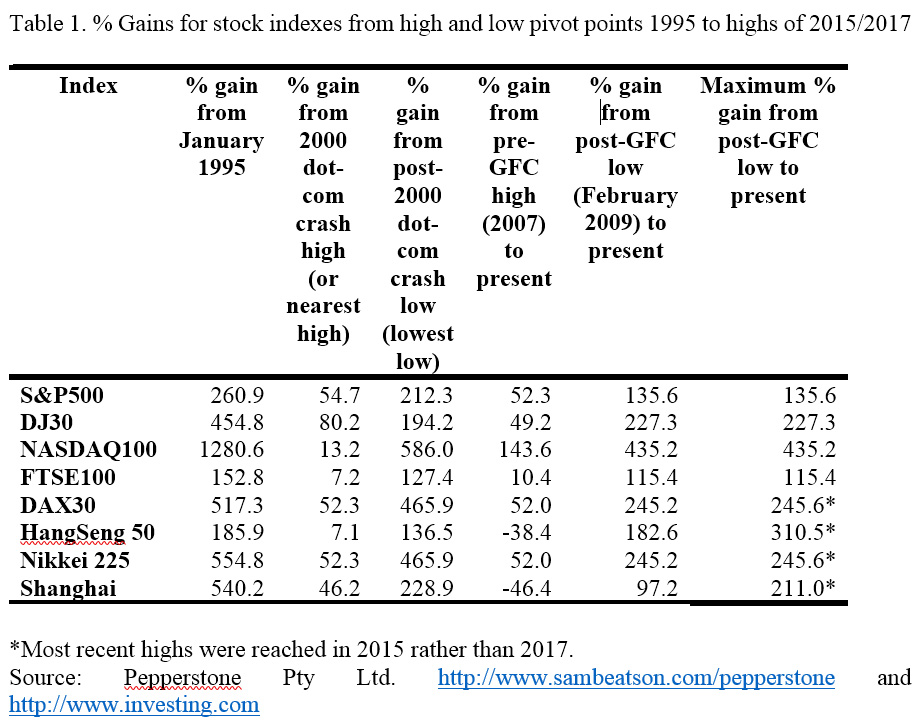 Meanwhile, East Asia’s economic leader, China, has maintained GDP growth standards more than three times higher than the current and highest predicted U.S. growth outcomes over the next few years, according to the official Chinese figure of 6.7%. This comes off the back of exponentially rising GDP growth averaging above 10% over the last 37 years. Concurrently though, the performance of China’s relatively infantile stock markets have shown the volatility of a whipsaw in short time windows (See figure 1).

Unlike the stock markets reflected by the other indices listed in table 1, Hong Kong, with its large proportion of mainland Chinese companies listed, along with China have both failed to usurp their pre-GFC highs and indeed sit 38.4% and 46.4% lower than those mountaintops, respectively. This will have left investors in China who bought at the highest point pre-crisis facing almost half of their investment accounts being wiped out. Even though those who bought at the low will be nurturing gains of almost 100% today, China and Hong Kong are both also down substantially off their 2015 highs, whereas Japanese shares have recovered. 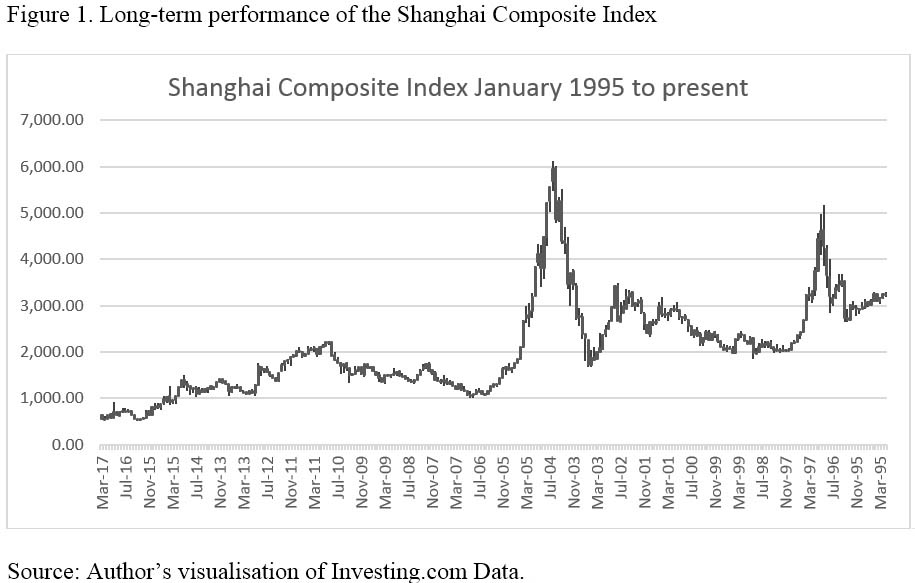 The Chinese growth story has undoubtedly been based on policies that have transformed the real economy and not the success or failure of the capital markets experiment. However, the latter provides a regulated platform, complete with companies and securities laws, corporate governance (including accounting framework that aims for international standards), supply and buy side institutions, associated technology and a diverse investor base.

China’s financial system does not yet appear robust enough to prop up the fragile economy sustainably though, or efficiently if we take into account the major recapitalisation and debt restructure projects the largest banks have required over the last fifteen years in addition to China’s high debt ratios in many important companies, and in the economy at large—more than double annual GDP. Moreover, the hoarding of foreign exchange reserves and purchasing of vast swathes of U.S. treasury securities by China betrays structural imbalances in the imperfect economy and a lack of internal market development.

At the same time, China is under external pressure—President Trump seems to take the view that the Chinese government, through the People’s Bank of China (PBOC) has the ability to devalue the Chinese yuan RMB currency, in order to prop up its dependence on exports and continue to attract investment from outside. Figure 2 does support the notion of a weakening yuan against the USD, certainly, a bit of scrutiny is needed to avoid post propter ergo hoc policy decision making. The weakening yuan also reflects the weakening Chinese economy, although granted the People’s Bank does set the rate and limit changes to a 2% daily range. The point being made here is that offshore trade (shown below) in RMB (so-called CNH trade vs. onshore CNY trade), mainly in Hong Kong, also London and Singapore, will to some extent inform the PBOC’s rate setting. If the USDCNH is being bought (buying dollars in exchange for selling Chinese offshore yuan), speculatively or for international settlement or repatriation reasons, the downside pressure on the yuan will be felt by the onshore currency through arbitrage traders in Hong Kong playing the gap between CNH and CNY. The PBOC has been known to step in when this happens, although uncommonly.

The economy is slowing down, and other developing economies offer competitive labour costs, while North Korea is a thorn in China’s side. This will exert downside pressure on the yuan from speculators in addition to China’s desire for a weaker yuan in attempts to maintain export competitiveness. These points only offer mild moderation to Trump’s view though, they do not categorically negate it. 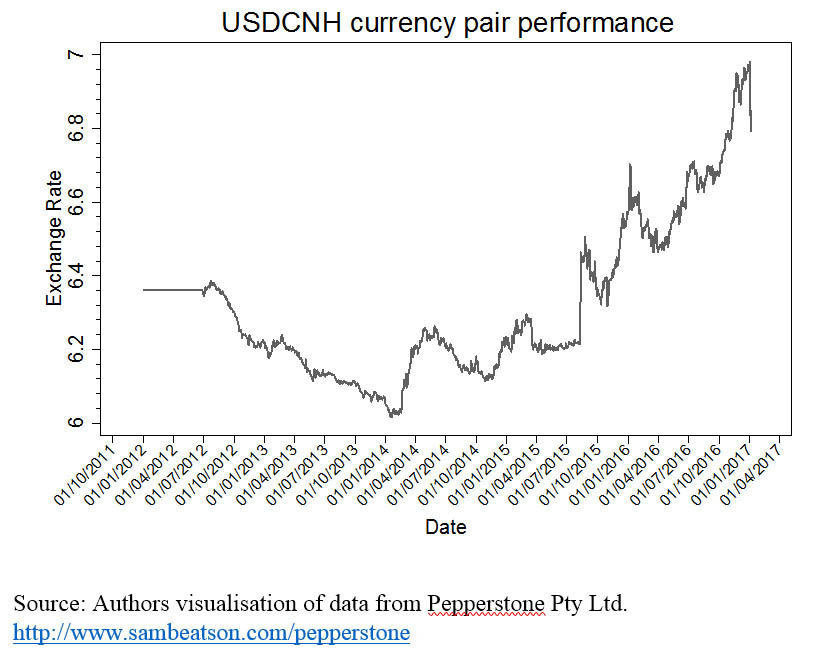 Foreign investors, diplomats and governments should play a key role in promoting their access and cooperation in the Chinese financial sector. Chinese government policy, companies and investors must align themselves towards a growth trajectory. Stability and growth is what the Chinese stock market needs. The volatile patterns and current building up of positions as they appear could point towards longer term growth if this direction can be established—recall optimistically that deep market corrections were seen during the 1929 U.S. Great Depression, and from these followed a near 100 year bull market. This is a very bullish interpretation to transpose onto the Chinese case, granted, but not an impossible vision, if China can improve the quality of more of its companies, their innovation, their management, governance, and promote investment not as akin to casino gambling, but part of a long-term financial plan.
As it stands currently, the Chinese stock market may now provide a new recourse to wealth creation enthusiasts in China. In the municipalities, this is an era of property unaffordability and there exists policy restrictiveness on buying multiple properties in the most popular of built-up areas like Beijing—even the government seems to be moving its offices in part due to property prices, traffic and overexpansion of Beijing to a sixth ring road now—in a historic relocation which has the potential to break up networks in the centre, at a stretch, a possible sign or catalyst of long overdue political reform.
With a much lower entry point and the multilateral support China seeks, Chinese investors will switch to stocks as the property market cools, given the lack of viable options and the institutional flows from inside and outside of China which may both lead and follow as investors seek to realign their portfolios on an upward trajectory, assuming a falling set of developed markets.
While domestic investors seem to have lost confidence due to the painfully slow growth, over the last year for instance, the market has been creeping higher. If economic growth in China and the region can be sustained—China has invested heavily in infrastructure projects in the region, for instance, in part to spread bets into areas with future consumer trend prospects—China may make an attractive proposition again when western stock markets continue what could be the start of a cooling off period.
Stock MarketChina Stock Market
printTweet
You might also like
Back to Top
CHINA US Focus 2018 China-United States Exchange Foundation. All rights reserved. Disclaimer