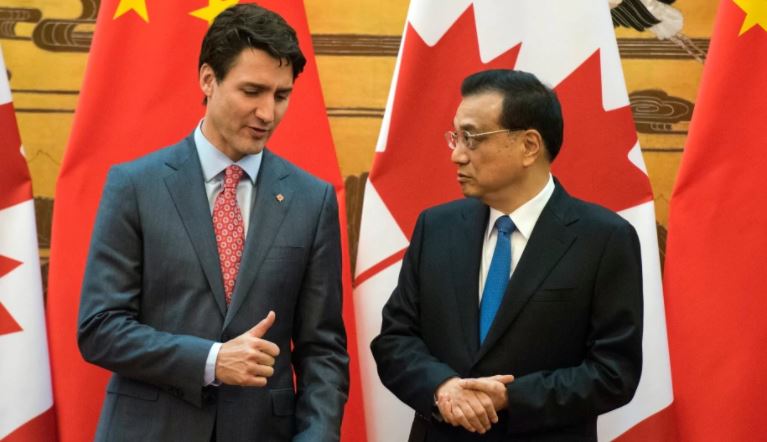 Canadian Prime Minister Justin Trudeau, left, and Chinese Premier Li Keqiang at the Great Hall of the People in Beijing, Dec. 4, 2017. Trudeau has just returned from China without a promise to start formal talks on a comprehensive trade deal with the country. (Fred Dufour/AP)

There were great expectations in Canadian business circles that Prime Minister Justin Trudeau’s visit to China would result in the announcement of the beginning of bilateral trade negotiations between the two countries. But it didn’t happen. Instead there was an awkward moment when Premier Li Keqiang cancelled a scheduled press conference after a prolonged meeting with Trudeau and the two leaders read prepared statements only. In those statements they said the two sides would continue the exploratory discussions that have been going on now for about a year, but there was no announcement that negotiations would begin any time soon.

The hiccup appears to be a result of two factors; Canada’s insistence that negotiations with Beijing include elements of what is described as a “progressive trade agenda” and poor communication of expectations and bottom lines on both sides. Normally events like this are well choreographed, with the results pre-cooked and the leaders expected simply to add the icing. In this case, it was clear that the cake was still missing a few key ingredients. Among these, from the Canadian side, were elements of the “progressive” agenda, such as labor rights, environmental standards, gender issues and even “governance”, a code word for human rights. The Trudeau government has been touting its progressive agenda for some time now, ever since the Canada-EU Economic Partnership Agreement was finalized. It is seen as a way of standing up for “Canadian values” as well as dealing with issues that could unfairly tilt the trade playing field, such as weak labor and environmental standards.

From a Chinese perspective, most of these issues have no place in a trade agreement. The China-Australia FTA had no labor or environmental chapters, and certainly nothing on governance or gender issues. If the two sides were that far apart, why was there confusion over the objectives of the visit? Even though Trudeau’s office made no mention of starting trade negotiations at the time of the visit’s official announcement, and Canadian officials tried to downplay expectations, many in the Canadian business community were convinced that the time had come to move from exploratory discussions to full-fledged negotiations.

China was seen as eager to do a deal with Canada, both because of the “Trudeau effect” (the goodwill attached to the Trudeau name owing to the role of Justin Trudeau’s father, Pierre Trudeau, in bringing China into the community of nations in the 1970s), and the fact that a trade agreement with Canada would be China’s first with a G7 country and could serve as a template for future negotiations with other G7 countries, including eventually the United States. If China was eager, this didn’t translate into the sort of concessions sought by Canada. China takes the long view. While Canada is a good potential partner for a trade agreement, China can wait. Maybe the Chinese calculated that with its back against the wall on NAFTA, owing to US demands that many have described as “poison pills”, Canada would be amenable to backing down on some of its conditions for negotiations. Trudeau, for his part, is facing opposition in Canada to doing a deal with China, coming from both industries that feel threatened by Chinese exports of goods and capital and from groups opposed to China’s human rights record. Securing Chinese agreement to negotiate on the basis of “progressive” trade elements would help Trudeau deal with some of this internal opposition.

After the impasse in Beijing between Li and Trudeau, International Trade Minister Francois-Philippe Champagne stayed behind—without evident results--to continue discussions when Mr. Trudeau moved on to Guangzhou to participate in the Fortune Global Forum. There he not only touted Canada as an investment location, but praised China for its commitment to open markets and liberalized trade, a commitment to which he said Canada also subscribes. He argued that Canada’s progressive agenda, designed or at least marketed as a way of ensuring greater equality of benefits from trade liberalization, is important as a way of keeping protectionism at bay. This could rightly be seen as poke at Donald Trump who got little in concrete trade achievements from his recent visit to China, other than a number of symbolic contract signings, some of which may not materialize or may not be new business. China and Canada also issued a joint statement on climate change and clean growth, pledging concrete bilateral cooperation thus further distancing both countries from the approach of the Trump Administration. The differences between the two visits, Trump and Trudeau, were striking.

Trump’s visit to China last month was about more than just trade, although dealing with the trade deficit with China was a major part of his election campaign a year ago. On this visit, he laid the blame for China’s large trade surpluses on previous U.S. administrations, implying that he would turn this problem around. Mr. Trump seemed genuinely impressed by the tenor and opulence of the reception that he received at the Forbidden City and it was clear that China pulled out all the stops to lavish Chinese hospitality on their guest. Mr. Trudeau’s treatment was more modest; the standard banquet at the Great Hall of the People and a meeting with President Xi Jinping at a Chinese state guest house. Where the upbeat mood of Mr. Trump’s visit changed somewhat was over the issue of North Korea, with the U.S. President making it clear he thought China was the key to resolving the Korean nuclear issue. China has offered little comfort on this score. Trudeau also discussed North Korea with President Xi, but as far as we know was not making any requests. Canada has agreed to co-host (with the U.S.) a United Nations meeting on Korea early in 2018, in Canada, which China is expected to attend.

One significant difference between the Trump and Trudeau visits was the issue of human rights. Mr. Trump made it a point not to raise the issue; Mr. Trudeau did the opposite, noting that he had raised human rights, several consular cases where Canadian citizens are being held in China, and China’s death penalty.

Given the lack of an announcement on trade talks, Trudeau’s visit is being assessed in some quarters in Canada as a failure, but it is important to get the terms right before embarking on what will be a long and difficult negotiation. While no agreement on starting negotiations was reached, exploratory talks will continue. It appears that commitments on labor and disciplines on State Owned Enterprises are the main stumbling points for the Chinese, but it may be possible to find some common ground.

The good news from Mr. Trudeau’s visit was that he followed through on the commitment that he and Li Keqiang made last year to have annual meetings. This was a positive development. However, if there is a lesson coming out of this visit, it is that management of expectations, both domestically and in Beijing, and clear communication of goals by both parties, are the keys to success. The window of opportunity for a Canada-China bilateral agreement remains open, but will not stay open forever.

China Foreign TradeChina-Canada Relations
printTweet
You might also like
Back to Top
CHINA US Focus 2018 China-United States Exchange Foundation. All rights reserved. Disclaimer