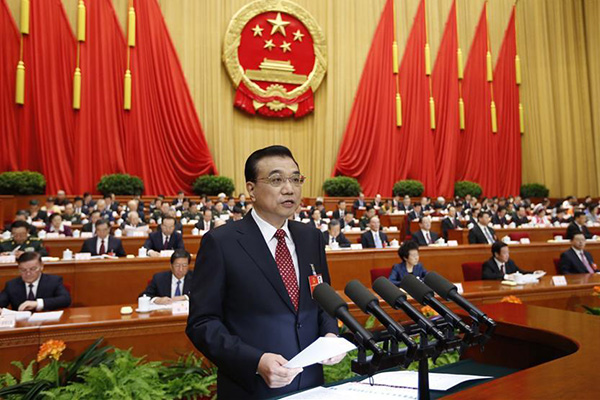 Each year at the opening session of the National People’s Congress, the premier will report to the legislators what the government did in the past year and will do in the year to come. What makes this year’s Government Work Report different?

In this year’s Government Work Report, Premier Li Keqiang summed up the country’s economic development in the past five years. During the period, average annual GDP growth was 7.1% and average CPI was 1.9%. These figures were about 30% lower, compared with the 10-year average from 2003 to 2012. And it wouldn’t be surprising that during this period, the rate of investment returns also dropped. Of course, this was the same with economic growth in the United States. Its growth rate also slowed down and was about 25% lower than it was in the new economy era in the 1990s. Although new industries such as smart manufacturing, the internet, and biomedicine have developed remarkably, the global economy, including China and the US, is still struggling to find new growth engines.

The 2018 goals with regard to major economic indicators are virtually the same as 2017’s, with GDP, CPI and M2 respectively at 6.5%, 3% and 12%. In 2017, the central fiscal deficit was 3%, but this year’s deficit rate was lowered to 2.6%. In China, it is a usual practice to convene the Central Economic Work Conference at the end of the previous year to set the tone, principles and priorities for the coming year’s economic development, and the Government Work Report helps materialize the conference’s principles and decisions and lays out feasible plans and policies for the year to come. China has put more emphasis on the quality of economic growth, and works to deleverage and reduce financial risks, and is committed to letting the public share the benefits of the country’s economic development. Given the fact that China adopts a neutral fiscal and monetary policy, I estimate that the GDP growth for this year will be 6.7%, and the CPI will be 2.6%. For the US, the circumstances are remarkably different. Its GDP growth this year is expected to near or exceed 3%, with inflation rising moderately. This is closely associated with Donald Trump’s tax reduction plan and his plan to upgrade infrastructure.

The Government Work Report states that the growth in the country’s broad money supply M2 and total social financing will remain relatively stable. The 2017 goals for the two indicators were set at 12%, but the actual growth of M2 was merely 8.2%. Total social financing in 2017 amounted to about ¥175 trillion, about ¥19.6 trillion more than the previous year. We can see that M2 growth was lower than the aggregate of GDP and CPI. At the same time, the country’s M2/GDP ratio in 2017 dropped by about six percentage points, and its foreign exchange reserves also dropped by about $1 trillion from the peak level. This has not been seen in the past 40 years. The regulation of China’s financial system stresses macro-prudential policies and “penetration” management. In comparison, the US Federal Reserve has not significantly reduced US balance sheets, and its regulation was also eased. It seems that China is moving faster than the US in the normalization of monetary and regulatory policies. This means that China will try to maintain stable interest rates and exchange rates in 2018.

The fiscal deficit rate was slightly lowered. People thought the fiscal deficit rate would be around 3% this year, but the rate specified in the Government Work Report was 2.6%. Analysis showed it is logical to set the rate at that level. China put an end to the fiscal stimulus policies adopted after the subprime mortgage crisis and the global financial crisis, and is committed to maintaining fiscal balance, improving the business environment, and boosting the efficiency of fiscal funding. In the past two years, the government reduced tax and fee burdens on enterprises (particularly medium-sized, small and micro enterprises) by at least ¥1 trillion each year. Given the fact that the central government is allowing local governments to issue an additional ¥550 billion yuan in special bonds in 2018, the actual fiscal budgetary expenditure this year would not be lower than ¥20 trillion. Unlike the US, China’s fiscal stimulus measures are shrinking. China’s fiscal structure, however, has some flaws. For instance, in the outstanding debts of the central and local governments in China, the proportion of bonds is merely 24%, and in the US and some European nations, the rate of long-term and medium-term treasury and municipal bonds could be as high as 60%.

In short, policy continuity is one of the main features of this year’s Government Work Report. It also works to give the public equal opportunities to enjoy and share the benefits of economic development and prosperity.