Why the Chinese Economy Has Stabilized 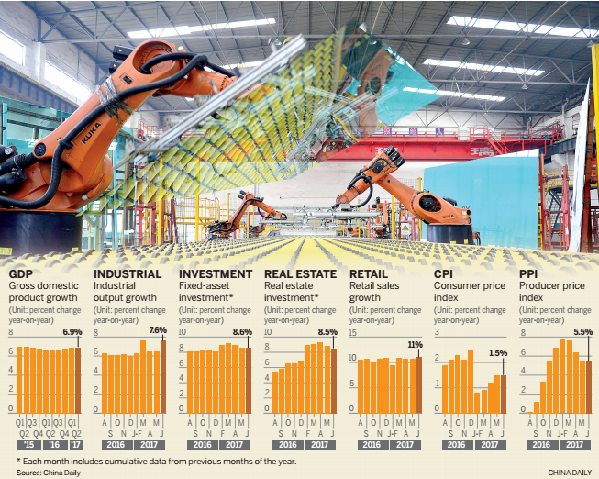 Since the start of 2017, China’s economy has shown a stable recovery supported by the better-than-expected export numbers, high industrial reserves, and a hot property market. Yet as financing difficulties and costs rise again, private investment remains weak, and industrial reserves still seem bloated, the potential financial risk cannot be ignored. The pressure of fiscal income has increased, and these factors have curbed the economic growth. Still though, the GDP growth for the whole year is estimated to hit about 6.8%, demonstrating that the Chinese economy remains stable.

The economy has grown stable. In the first half of the year, China’s GDP increased by 6.9%, 0.2 percentage points higher compared to the same period of last year. China’s economy has fluctuated between 6.7 and 7.0% for ten consecutive quarters, and the economy has grown more stable. The first half of the year witnessed many improvements in the physical volume indicators of electricity consumption and railway freight. The indicators of corporate profits, fiscal income, and per capita disposable income clearly improved. Market confidence was boosted as the PMI constantly stayed above the threshold of 50, which separates expansion from contraction.

The price level is moderate and controllable. Consumer Price Index (CPI) rose by 1.4% and 2.1% with food and energy excluded over the same period in the first half of the year, maintaining a moderate momentum. Payment Protection Insurance (PPI) rose by 6.6% over the same period and the year-on-year growth rate fell for three months running. The four major energy raw material industries such as coal, iron and steel, nonferrous metal and petrol chemistry made more than 80% contribution to the PPI growth. In general, China’s economy enjoys a more easing relation between aggregate demand and supply. Additionally, the price level is more moderate and controllable, leading to neither inflation pressure nor deflation worries.

Balance of payment performs well. The recovery of the world balance of payment gave rise to China’s increasingly stable balance of payment. Specifically, China took the initiative to increase imports to alleviate trade imbalance. China’s trade surplus was $185.1 billion dollars in the first half of the year, a reduction of $54.6 billion year-on-year. The RMB exchange rate and foreign reserves remained quite stable. By the end of June, the exchange rate of the RMB was 6.7744 against the U.S. dollar, an appreciation of 2.4% from the end of last year. Meanwhile, foreign reserves expanded for five consecutive months to 3.06 trillion dollars in June.

The economic structure continues to optimize. Research and development, information technology services, online shopping, and logistics sectors are growing rapidly. Additionally, new services like bike sharing, online education, and biomedical sectors are thriving. Such industries continue to move towards mid and high-level development as the added value of the high-tech industries and equipment manufacturing maintained a growth of more than two digits. Simultaneously, China’s investment structure has further optimized, specifically for investments in high-tech industries and services, although investment in high-consumption manufacturing has declined to some extent.

The supply-side structural reform has made achievements. Further efforts have been continuously made in cutting industrial overcapacity, bringing down the housing inventory, reducing debt-leverage levels, and lowering corporate costs. The national industrial capacity utilization in the first half of the year was 76.4%, up by 3.4% from the year before. By the end of June, the task of cutting excessive iron and steel capacity was nearly accomplished, while the task of cutting coal capacity was fulfilled by 74%. The housing inventory was actively cut down; the area of for-sale commercial housing fell by 9.6%, down to the lowest level in 26 months. Corporate debt-leverage also went down, and by the end of May, the asset-liability ratio of the above-scale industries was 56.1%, a decline of 0.7% over the same period. The corporate cost shrank a bit and the weak links have vastly improved.

Creating new economic energy. In the first half of the year, the average newly registered enterprises numbered at 16,000 households every day; the added value of the high-tech industries and equipment manufacturing grew by 13.1% and 11.5% respectively. There is a constant stream of big data, cloud computing, new technologies, and business models.

Inventory replenishment fueling economic growth. At a time when China entered the period of replenishing industrial inventories, the superimposed effect of cutting excessive capacity led to higher prices for industrial products and enterprises. The increased inventory of manufactured goods was the main engine of the short-term economic growth.

The recovery of the world economy increased demand for exports. Since the second half of 2016, due to the stronger economic recovery in the USA, Japan and the EU, commodity prices have gone up and global trade has gradually improved. The improved global market demand turned China’s exports from negative to positive growth. In the first half of the year, China’s export and import grew by 8.5% and 18.9% respectively in terms of the U.S. dollar with 18.1% and 29.3% increase over the same period. The contribution of China’s net export to GDP surged from -10.4% to 3.9% year over year, increasing GDP by 0.97%.

GDPChina’s EconomyWorld Economy
printTweet
You might also like
Back to Top
CHINA US Focus 2018 China-United States Exchange Foundation. All rights reserved. Disclaimer