The South China Sea issue is now on the front pages, almost daily. While the Americans feel that the Chinese are being assertive, aggressive, unreasonable, and fail to adhere to international legal norms, the Chinese people feel strongly that history, logic and the law is on their side. 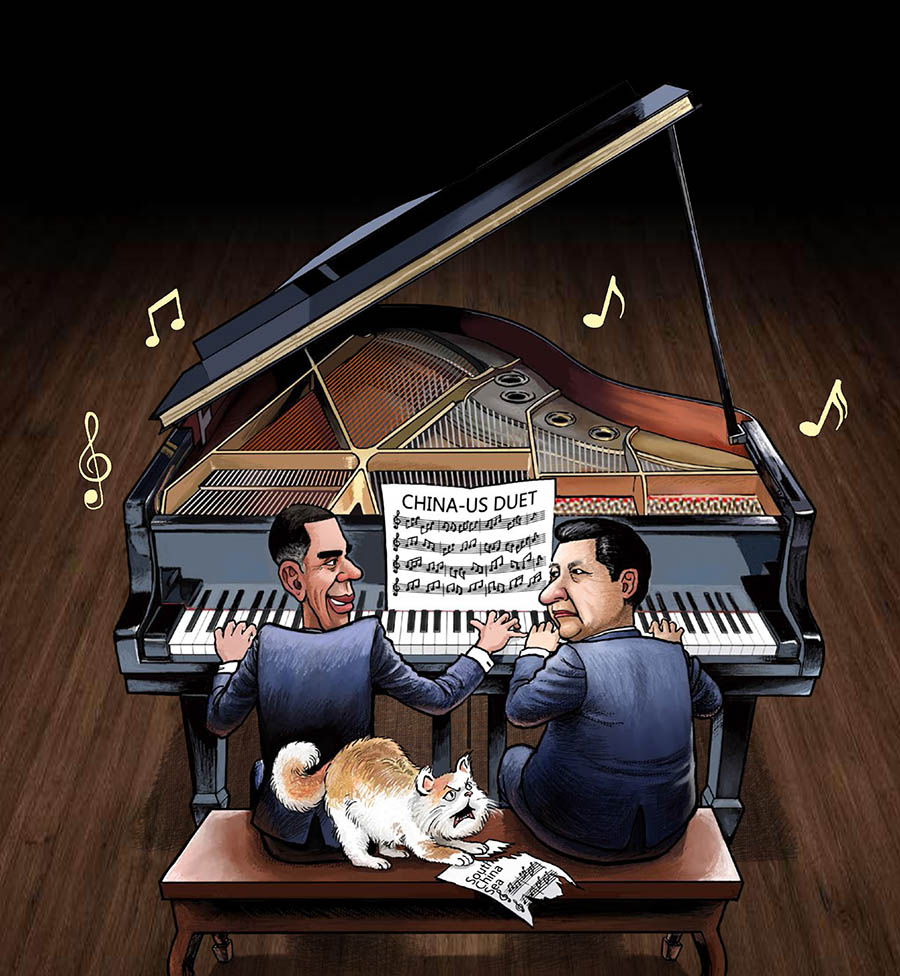 China cannot understand why America takes a different view and be oblivious to the historical facts, and even goes so far as to frequently carry out military exercises in the South China Sea to make its point. U.S.-China relations are too important for the people of the two nations and for the world at large. At this point, protecting U.S.-China relations must be the first priority for all of us. It is time for us to rethink and re-evaluate, with urgency, the issues involved.

The Chinese discovered the Spratlys (known as Nansha Island in China), with the earliest archaeological evidence of their use dating back hundreds of years. Navigation guides for fishery activity, compiled by fishermen from China’s Hainan Island as early as the 18th century, not only designated specific names to most features in the Spratlys, but also provided detailed narratives on the direction and distances (expressed in the length of travel time) of the navigational routes. Chinese fishermen would live on these islands during the more favorable fishing seasons.

In addition, China exercised sovereignty over the Spratlys going back to the Yuan Dynasty (1271 – 1368 AD) starting with an official survey of Chinese territories covering the Spratlys followed later by the formal incorporation of the Spratlys as well as Hainan Island into the administration of Guangdong Province during the Qing Dynasty (1644 – 1911 AD)

In more recent history towards the end of the Second World War, there begun ample, clear and convincing evidence that china has sovereignty over the Spratlys and that is recognized by the international community including the U.S. These can be found in the very important international treaties and declarations.

First is the Cairo Declaration of November 27, 1943. Second is the Potsdam Declaration of July 26, 1945. Third is the Treaty of Peace, also known as the Treaty of San Francisco, signed on September 8, 1951, between 48 nations and Japan. (Because of the onset of the Cold War, neither the PRC nor the ROC was invited to San Francisco). Fourth is the Sino-Japanese Peace Treaty, signed on April 8, 1952, between Japan and the Republic of China (ROC). Fifth is the United Nations General Assembly Resolution 2758, passed in 1971, recognizing the People’s Republic of China as the only lawful representative of China to the United Nations, in place of the Republic of China. And lastly, the Joint Communiqué of the Government of Japan and the Government of the People’s Republic of China, signed on September 29, 1972, which acknowledged that all territories stolen from the Chinese shall be restored. In each one of these treaties or declarations, reading them individually, or reading the six all together, you will find definitive evidence supporting the legal position that the Spratly Islands actually belong to China.

By the 1970s, there was a discovery that the South China Sea possessed a wealth of oil and gas reserves. This resulted in a dramatic escalation of interest in the region, particularly by Vietnam and the Philippines. As a result, increased tension ensued.

The situation was further exacerbated in 1982, when the United Nations Convention on the Law of the Sea (UNCLOS) was promulgated, establishing a 12-mile from shore territorial water, and a 200 nautical mile from shore economic zone (also known as the EEZ). This has further complicated the claims and counter claims, and enticed even more ASEAN countries to make claims in the South China Sea.

Since the 1970s, China urged restraint. And while insisting on its sovereignty, China suggested that peace can be maintained if the countries agreed to explore the resources jointly, sharing the resources together, and leaving the sovereignty dispute for future generations to resolve. China began bilateral negotiations with the other claimants.

Unfortunately, there has been no progress in those negotiations, but since that time, more than a thousand oil wells have been drilled, mostly for the accounts of the Vietnamese and the Filipinos. But up to now, China has not drilled a single well in the area.

Over this period, Vietnam built an airstrip on one of the Spratly features. Last year, China decided to proceed with the construction of an airport on one of the features it occupies. China has also built four lighthouses in the Spratlys to support international navigation.

By 2002, because of intensive efforts of ASEAN countries and China, a Declaration of Conduct was agreed upon, promoting bilateral negotiation among the disputing nations over sovereignty issues, and calling for the unfettered freedom of navigation in the South China Sea for all nations of the world. A Code of Conduct between the ASEAN countries and China reflecting the above-mentioned principles is now being actively pursued. China believes that this process, although at times fraught with difficulty, continues to be the best way to resolve the dispute.

China’s activities in the South China Sea have neither been aggressive nor assertive, but rather have been restrained, and aimed at promoting peace and common prosperity.

There have been allegations that China does not follow legal norms on the settlement of sovereignty disputes in the South China Sea. It is not commonly known that the United Nations Conference on the Law of the Sea successfully produced a convention, only after nine years of marathon discussions and negotiations. The stalemate was broken because the convention provided the parties with an option to make an exception in cases concerning national sovereignty and making boundary delimitation.

China ratified the Convention on June 7, 1996. It made a declaration upon ratification reaffirming its sovereignty over all its archipelagos and islands, including those of the Spratlys. On August 25, 2006, China made a declaration under Article 298 of the Convention that any sovereignty and maritime boundary delimitation issues are excluded from the jurisdiction of any dispute resolution mechanism under the Convention. Similar position is taken by over 30 other countries.

This is the legal ground under which China has declined to participate in the Permanent Court of Arbitration hearing at The Hague, called for by the Philippines. Legal experts considered China’s position in this regard is proper and legal.