A Canada-China Extradition Treaty: Not Such a Bad Idea

On the eve of Chinese Premier Li Keqiang’s official visit to Ottawa, the Globe and Mail reported that Canada and China had agreed to begin negotiations on an extradition treaty. In a hasty rush to judgment, this announcement was pilloried not only by the Globe in an editorial the same day, but by the opposition in Parliament and numerous other commentators. The Globe expressed concern that such a treaty risked implicating Canada and its judiciary in Beijing’s “sledgehammer methods”. Others referred to Beijing high rate of executions, lack of due process and transparency in its “brutal” judicial system, and pointed to political motivations behind the current anti-corruption drive. The following day the Globe continued its breathless coverage, with a front-page story on Chinese agents entering Canada posing as tourists in an attempt to track down fugitives from President Xi’s anti-corruption campaign and to try to persuade them to return to China to face the music. These activities, known as “Operation Fox Hunt” are widely known and have taken place in a number of countries besides Canada. That is not to excuse them, but to provide background for why an extradition treaty with China would be in Canada (and China’s) interest. 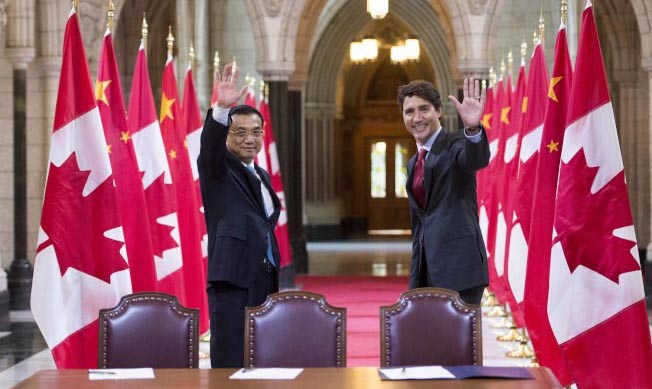 In addition to criticism of China’s human rights record and the activities of its undercover agents, there was immediate linkage in the Canadian press to the release, a few days earlier, of Canadian Kevin Garrett who had been held in detention in China on charges of spying. Garrett and his wife, self-professed Christian “missionaries” operated a coffee shop on the China-North Korea border prior to their arrest in August of 2014. Most Canadians assume the charges were trumped up as possible retaliation after Canada publicly accused China of being behind cyberespionage attacks on the National Research Council. Prime Minister Trudeau raised the Garrett case during his official visit to China at the beginning of September.  He had what is generally regarded as a very successful visit, meeting his objective of “resetting” the bilateral relationship after the ups and downs of the previous Harper government (during the visit, Trudeau announced that Canada would apply to join the Asia Infrastructure Investment Bank, was present at the signing of $1.2 billion in trade deals, announced the opening of more visa centres in China and was even able to get an impending ban on the import of Canadian canola seed postponed, relieving an immediate problem for Canadian farmers). However, there was one problem Trudeau did not solve; when he left China Kevin Garrett was still in prison. He was finally released on September 14, after a quick closed-door trial.

The trial and expulsion took place a couple of days after Mr. Trudeau’s National Security Advisor, Daniel Jean, was in Beijing to discuss the start of talks toward an extradition treaty. The government claims there was no quid pro quo and no direct connection between the release of Garrett and their agreement to start discussing a treaty, and there probably wasn’t any explicit linkage. The Chinese wanted to get an irritant out of the way before Li visited Canada and couldn’t lose face by releasing Garrett during Trudeau’s visit. The fact that there was constructive dialogue between the two countries at the most senior level no doubt helped resolve the issue.

It is most unlikely that the Trudeau government would agree to begin negotiations on an extradition treaty just to secure the release of one consular case. Rather, the decision to proceed rests on the need to put legal issues with China on a firm and transparent basis. The issues behind the despatch of undercover agents to Canada go back a long way, even before the launch of Xi’s anti-corruption drive. Notorious smuggler (and briber of Chinese officials) Lai Changxing, who entered Canada on a fraudulent passport in 1999, claimed refugee status and fought extradition to China for 12 years before he was finally repatriated. Lai’s saga, and the political pressure that had to be applied to get him back (his crimes were not in dispute) was a contributing factor to China’s ill advised “self-help” methods of pursing convicted criminals without informing the Canadian authorities. The best way to deal with such methods is to provide for a front-door mechanism to replace the current back-door approach. Regular dialogue with the Chinese authorities and a legal framework to handle cases like that of Lai would be a marked improvement over the status quo, and would help put an end to Chinese free-lancing. That is the first benefit for Canada.

A second would be a means to control the enormous flows of hot money from China to Canada. No one knows for sure how much money is flooding into Canada, but the results are well known in terms of an inflated property market in Vancouver and suspicious high rollers at BC casinos. Some estimate put the illegal outflow from China at up to $1 trillion per year, and Canada gets its fair share, in part because of weak enforcement of money-laundering regulations and even lax enforcement at airports where suitcases of undeclared money have been seized, and then returned to their owners on payment of a nominal fine. In most other countries the funds are confiscated. According to a report in the International Business Times, 26 of the top Chinese economic fugitives have fled to Canada (the US has 40). Canada does not need these people. The surest way to stop the flow of hot money and corrupt officials from fleeing to Canada is to put in place an extradition treaty. They will quickly go elsewhere. Just the fact that Canada and China are talking about extradition (and the talks may go on for many years) will act as a significant disincentive. This is another major benefit for Canada.

But what about the criticism that if Canada signs an extradition treaty with China it will be sending back to an uncertain fate persons guilty of political rather than economic crimes? Prime Minister Trudeau has said that Canada has high standards and will follow a rigorous process consistent with Canadian values in negotiating a treaty with China. Agreeing to begin negotiating a treaty is a long way from agreeing to the text of a treaty, and the devil will certainly be in the detail. Canada’s most recent extradition treaty (with Italy, replacing an earlier treaty) defines an extraditable offence—it must be a crime in both countries—outlines standards of evidence required and lists a number of mandatory and discretionary reasons why either party can refuse extradition. One can assume that a treaty with China will contain these conditions, and more. While China does not have an extradition treaty with most western countries, it has one with Australia (not yet ratified by Australia), France and Spain, all countries with a strong rule of law tradition (Spain in recent years). Therefore it is not inconceivable that Canada and China can find common ground, although the negotiation will not be easy and could take a number of years. In the meantime, a process and a dialogue will be underway, something that is far superior to the “under-the-radar” activities that are currently occurring.

If Canada is able to conclude an agreement with China on the basis of its current extradition model and the assurances given by the Prime Minister, it will have helped nudge China closer to international judicial standards, and in the process will have removed a potential bilateral irritant, thus allowing Canada-China relations to move forward in other areas.  China is pushing an agreement, in part to help it expand its network of bilateral treaties and tighten the noose on corrupt officials. This gives Canada leverage to get the kind of agreement that will be acceptable to the Canadian public. Here is yet another collateral benefit for Canada.

The critics are quick to condemn the Chinese judicial system, and to jump to the conclusion that Canada will become complicit. Their criticisms of the shortcomings of Chinese justice are valid, but they miss the point. The way to deal with China is to engage on the basis of Canadian interests and values and build a network of bilateral, legally-based treaty arrangements that will define the terms of cooperation. That is far better than decrying the Chinese system, but doing nothing about it.

China-Canada Relations
printTweet
You might also like
Back to Top
CHINA US Focus 2018 China-United States Exchange Foundation. All rights reserved. Disclaimer