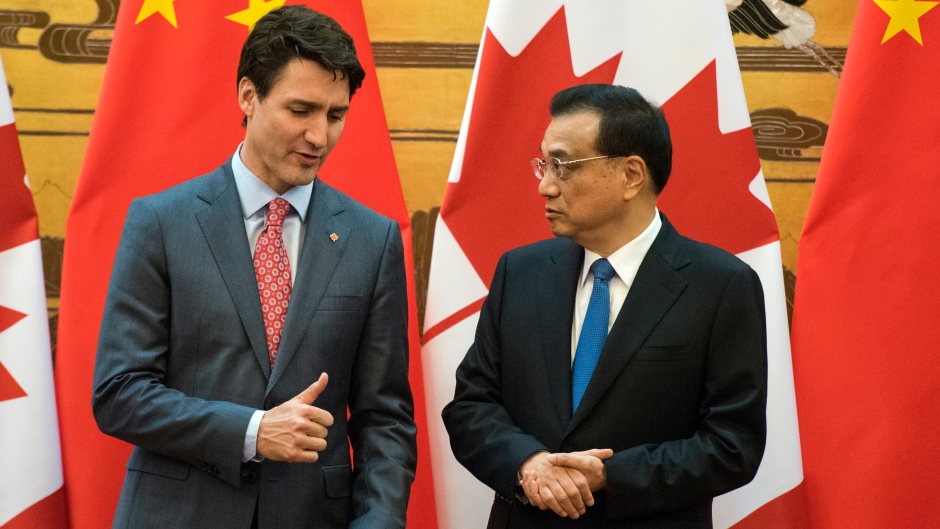 Canadian Prime Minister Justin Trudeau, left, and Chinese Premier Li Keqiang at the Great Hall of the People in Beijing, Dec. 4, 2017. Trudeau has just returned from China without a promise to start formal talks on a comprehensive trade deal with the country. (Fred Dufour/Pool photo via the Associated Press)

Prime Minister Justin Trudeau of Canada, with his charming appearance, progressive ideals and approachable personality, seems to be loved by everyone. Even the great Rolling Stone magazine has featured him on its cover with the title, “Why can't he be our president?”

Not in China. When Trudeau visited China in early December, he received a lukewarm response, with Chinese netizens teasing, “the only reason he is here is he wants to earn money from China.” Trudeau left without a free trade agreement; only a statement that he and his Chinese counterpart would continue talking about trade issues in the future. After he left, the Global Times argued that Trudeau’s commitment to linking environmental protection, labor rights and gender equality with trade negotiations is what led to the downfall of any bilateral agreement.

Why was Trudeau, the young, good-looking politician who is the embodiment of progressive ideals not as well-received in China as in North America? What does the Chinese media’s portrayal of Trudeau and the social media buzz about him tell us about Chinese political beliefs?

A state visit that captured attention in the “wrong” direction

Trudeau came to visit China for the second time in early December primarily to promote tourism and trade. But after his visit, it is questionable whether or not he achieved that goal.

It was reported that Trudeau’s scheduled press conference with Premier Le Keqiang was cancelled due to the failure to produce a Free Trade Agreement (FTA). The two sides thus ended up reading prepared statements saying that they would keep exploring opportunities to negotiate a deal. The Chinese Ministry of Foreign Affairs stated that deals were signed on clean energy, law enforcement and education, issues that The Toronto Star called “a smattering of side-agreements.”

Saying Trudeau left China empty-handed would be unfair. He did leave having generated more goodwill and public interest. His Weibo followers increased by 60,000 during his three-day visit to China, and he became an “internet celebrity” (or “Wang Hong,” “网红) evidenced by the fact that hundreds of thousands of people left him messages on his Weibo page. His online interaction with a Chinese film star, Liu Ye, inviting him to come to Canada to ski was on the list of most trending topics of the day.

If attention was all that Prime Minister Trudeau wanted from his visit to China, then he certainly achieved his goal. Unfortunately, very little substance was generated from the attention he garnered. Bits and pieces of the speech he delivered during his first-day were widely shared, but the shared sections were about him asking Chinese people to follow him on Weibo instead of the segment where he talked about diversity and tourism in Canada. One user commented on Trudeau’s Weibo page, “I don't understand politics. I only know that Trudeau is handsome.”

Trudeau’s charisma in the western world stems not only from his personality but also from his progressive ideals of inclusion. Trudeau, with his commitment to LGBTQ rights, tackling climate change, and female representation in parliament is particularly popular among youth in Canada as well as the U.S. But Trudeau’s progressivism does not appear to strike a nerve with Chinese netizens.

Reading through comments on Weibo regarding Trudeau’s visit, one encounters criticism of Trudeau for putting on a show of “political correctness.” When the Canadian embassy in China posted that Canada has accepted more than 40,000 Syrian refugees, the most-liked comment was: “give me back my money! I am not going to pour money into Canada anymore for immigration.” Many other comments argue that Trudeau’s acceptance of refugees undermines Canada’s national security.

The reason why many Weibo users believe that Trudeau is merely following political correctness dates back to their belief in the subjectivity of rights, in particular human rights. The video of Trudeau cracking a joke on press freedom in China was not well-received on Weibo, with some commenting, “he is lecturing us again.” Many people criticized Trudeau’s comments during his meeting with Philippine President Duterte, in which Trudeau raised concern over the violation of human rights during the anti-narcotics operation in the Philippines. They questioned, “It is obvious that drug abuse threatens the people. Does Prime Minister Trudeau have no eyes to see?”

The belief that “we know ourselves best,” which is prevalent on Chinese social media, even led to a semi-war between the Canadian media and Chinese media. The Global Times responded to a piece in The Globe and Mail from Canada that called China an “absolute dictatorship” with the argument: “Canada ranks only 10th among China’s trading partners…China is not in a rush to develop its relations with Canada.” Zhanhao (占豪), one of the most popular Wechat accounts focusing on international relations, published a piece that reads, “Canadian media’s tendency to always point fingers at Beijing is the reason... why Trudeau left without any significant deal.” The piece cites the example of a Canadian journalist raising the issue of human rights in a joint press conference between the Chinese Foreign Minister Wang Yi and Canadian Foreign Minister Stéphane Dion. Minister Wang Yi responded to the journalist: “Other people don’t know better than the Chinese people about the human rights condition in China.”

Aside from arguing that China’s sovereign affairs should not be subjected to intervention from either the Canadian Prime Minister or the Canadian media, Chinese netizens argue, “Canada’s sovereignty is compromised by following the big brother of the U.S.” One Weibo user wrote, “How dare Canada speak up? A state which has no international presence, that follows another state, does not have credibility.”

No doubt trade talk breaks down

The dissonance between Trudeau’s progressive ideals and mainstream beliefs among the Chinese people is part of the reason why Trudeau found it hard to strike a trade deal with China. It was reported that the Chinese delegation did not see eye to eye with the Canadians, who were seeking to add provisions regarding environmental protection, labor and gender issues. This is not a surprise. Chinese trade negotiators are embedded in the bigger cultural context and the belief that labor rights and gender equality are subsidiary to economic benefit is rooted in that context. Moreover, it has been the state’s official stance to prioritize economic development over the concern of rights, evidenced by the fact that most provisions in development aid or trade pacts have a “no-conditions-attached” approach.

Trudeau defended his progressive approach to trade during his last day in China at the Fortune Global Forum in Guangzhou: “If we…don’t think about the impact trade deals are going to have on citizens and communities and people, then we are going to find ourselves in a world where protectionism and inward thinking is the only option.” That is certainly a lofty ideal, but not one that Chinese people at the present stage necessarily appreciate. To rise above attraction based on eloquent speech and elegant style to one based on values and ideals, Trudeau has much more work to do with the Chinese audience.

China-Canada RelationsJustin Trudeau
printTweet
You might also like
Back to Top
CHINA US Focus 2018 China-United States Exchange Foundation. All rights reserved. Disclaimer