In recent exchanges with American colleagues, we got the impression that some people believe the concept of China-US New Model of Major-Country Relationship is dying. 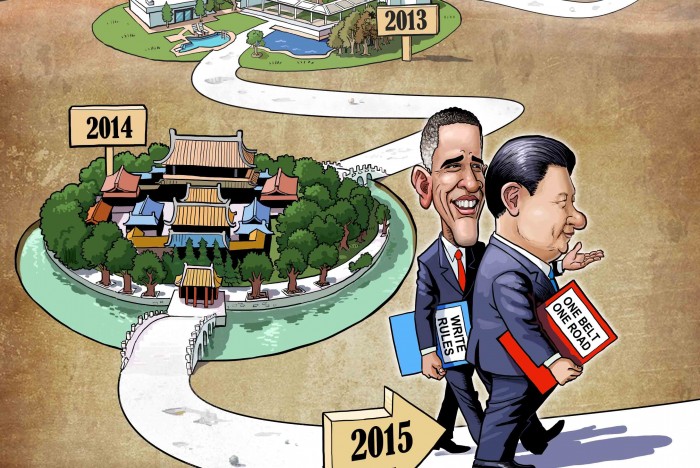 Some Americans argue: First, there is no need to create a new slogan to define China-US relations; instead, we need to go from the bottom, doing something practical, before reaching some strategic agreement. So, what is the meaning of “new”? Second, China has yet to develop into a power as great and strong as the US, and the two countries are no peers. So, what is the meaning of “great power” or “major country”?  Third, “No conflict and no confrontation” might suggest that the US should not intervene, especially by use of force, into China’s disputes with neighboring countries, thus preventing the US from fulfilling its security obligations to its allies. Fourth, “Mutual respect” might suggest that the US should respect China’s extended “core interests”, which does not tally with American core values. And the last, “Win-win cooperation” might suggest that the US should reconcile to China’s arrangements, losing US leadership. To sum up, they say, the New Model of Major-Country Relationship between China and the US is not to avoid the Thucydides Trap, it is a trap by the Chinese side to buy more time, develop more capabilities, and eventually kick the US out of the Asia-Pacific region.

US attitudes toward the concept have undergone three stages of careful consideration, prudent acceptance and deliberate avoidance. The stage of careful consideration started from February 2012, when then Vice President Xi Jinping visited the US and put forward the concept for the first time. Although the US side accepted the peaceful notion and welcomed new approaches to bilateral cooperation, it was not used to being propositioned about diplomatic concepts by other countries and losing the initiative of discourse, and didn’t respond. The second stage of prudent acceptance started from June 2013, when President Xi Jinping met with President Obama at the Annenberg Estate and gave clear definition of the concept. President Obama gave a positive reply. Later, high-level officials mentioned the “new model of relations” several times, but avoided the term “great power” and focused on the operational level of and “bottom-up” approaches to the concept. The third stage of deliberate avoidance started from November 2014, when during a joint press conference, President Xi emphasized four times to build a new model of major-country relationship between the two countries, while President Obama seemed to deliberately shun the concept. In June 2015, the phrase “new model of US-China military-to-military relations” disappeared from the list of the outcomes of the strategic track of the seventh round of the U.S.-China Strategic & Economic Dialogue (S&ED). Due to the above-mentioned reasons, some scholars think the concept is dead.

However, we should look at both sides of a coin. As the Chinese saying goes, “Although there are apes calling on both sides of the river, the ship has already past several mountains.” Although this ship of Sino-US cooperation is frequently sailing against adverse wind, due to such issues as cyber security and maritime disputes, the US still welcomes the emergence of a stable, peaceful and prosperous China and China has neither intention nor capability to challenge US leadership. It is exactly the basis for the concept of China-US New Model of Major-Country Relationship.

Although the economic and trade “ballast” becomes a bit loose, the military payloads are adding more weight and stability to bilateral relationship. Since the Xi-Obama Annenberg meeting in June 2013, military-to-military exchanges have witnessed steady and vibrant development. For example, Chinese naval ships participated in the RIMPAC-2014 and the two militaries have established the confidence-building measures (CBM) mechanism for the notification of major military activities as well as the rules of behavior for safety of air and maritime encounters. The shortest board of bilateral relationship has become the highlight and injected new and positive energy into the concept of China-US New Model of Major-Country Relationship.

Besides, the two engines of governmental communication mechanisms and people-to-people exchanges are running energetically and dynamically. There are more than 90 dialogues and communication mechanisms between China and the US, represented by the S&ED with the highest level, widest scope and most fruitful outcomes. Quietly and pervasively, people-to-people exchanges have infused warmth and vigor into the concept of China-US New Model of Major-Country Relationship.

Finally, common interests will induce common values, and strengthen the willingness to sail in the same ship. China and the US should join hands to respond to such global challenges as climate change, shortage and security of energy resources, safety of sea lines of communication, and non-proliferation of weapons of mass destruction. These are the areas where China and US need to cooperate more, which is exactly the purpose of proposing the concept of China-US New Model of Major-Country Relationship.

To conclude, this concept is far from being dead. Instead, it has greater vitality ahead.  It can be expected that when President Xi meets with President Obama this September, Xi will reiterate this concept, and their discussion will enrich the content and draw a more specified blueprint for implementing this concept, which will provide guidance and navigation for the great ship of Sino-US cooperation.