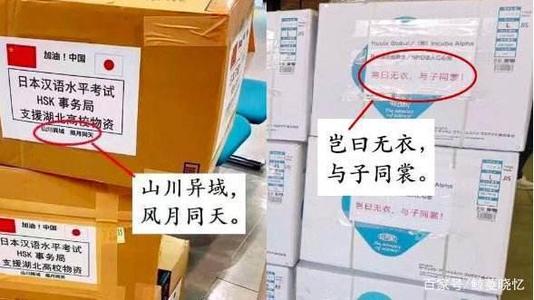 On the boxes of masks donated by a Japanese institution to China in its fight against the novel coronavirus, a Chinese-language verse was written, "Although we are in different places, we are under the same sky."

Within a few weeks of identifying the novel coronavirus in January, medical masks quickly became one of the most sought-after commodities for their perceived protective powers, disappearing online and from store shelves around the world. As the virus continues to spread, the stockpiling of medical supplies has led to global supply shortages. In the wake of the novel coronavirus outbreak, China and Japan have embarked on an unexpected path of reciprocal generosity. While the deep-seated tensions across the East China Sea will not be resolved overnight, their collaboration provides a powerful lesson for other bilateral relationships that have succumbed to deep-seated hostility around the world. China has been in particularly desperate need of masks.

While the coronavirus crisis has led many states and non-state actors to behave in their own self-interest, viewing the distribution of masks and other medical supplies as a sort of zero-sum geopolitical game, others have selflessly endeavored to distribute supplies to those who need them most, engaging in “mask diplomacy” despite needs in their own countries. In turn, the exchange of masks has taken on a new meaning of goodwill. Perhaps nowhere has that act of goodwill been as pronounced—and surprising—as the generous gifting between Japan and China.

The contrast in the global response to the coronavirus outbreak has been stark. While China levied criticism on the United States for its miserly initial offers of aid to China, on Taiwan for cutting off exports of masks to the PRC, and on countries around the world for closing borders to Chinese travelers, Japan was upheld for setting a more magnanimous example. Japanese entities—from the central and local governments, to NGOs and corporations—joined together in common cause to help their neighbors across the East China Sea.

The Japanese government was quick to take symbolic action, with members of Japan’s ruling Liberal Democratic Party voting to donate 5,000 yen (around $45) each from their monthly salaries—totaling 2 million yen or $18,170—to help fight the outbreak in China. The Japanese government built on those efforts by sending thousands of pieces of protective garments to Wuhan, while the residents of Oita prefecture—Japanese sister city of Wuhan—also gifted 30,000 masks to the epicenter of the coronavirus. Other cities, including Mito, Okayama and Maizuru, joined the effort.

Simultaneously, the Japanese company Ito-Yokado donated over a million masks to China, while other corporations including Maeda Construction, Air Water, and MUJI provided protective supplies. Movingly, the Japan Youth Development Association dispatched boxes of masks and thermometers emblazoned with characters from an ancient poem reading “lands apart, sky shared.” And perhaps most moving of all, Tokyo’s world-renowned Matsuyama Ballet company was filmed singing the Chinese national anthem on stage and cheering on its Chinese viewers from afar.

Through the gifting of masks and other supplies, Japan rebuilt a bridge to China that had long been severed. In response, Chinese social media quickly filled with gratitude for the Japanese well wishes. The Chinese people, as well as the Chinese government, have sought to return the kindness, even amidst their own precarious situation. Chinese Foreign Ministry Spokesman Geng Shuang expressed China’s willingness to reciprocate Japan’s kindness with a quote from the Book of Songs: “You throw a peach to me, I give you a white jade for friendship.” In the wake of the coronavirus outbreak on the Princess Diamond cruise ship which docked in Japan, China donated testing kits to the National Institute of Infectious Diseases of Japan. Even China’s richest man, Jack Ma, has stepped up to help, not only by pledging $14.5 million to fight the coronavirus, but also by donating one million masks through his foundations.

This reciprocal generosity has come as such a shock to many observers because, for generations, the Sino-Japanese relationship has been among the most entrenched rifts in the world. Rooted in mutual mistrust, unresolved tensions over territorial issues, and longstanding historical grievances, the abrasions in the bilateral relationship have failed to heal. In recent years, disputes over the Senkaku/Diaoyu islands and visits by Japanese leaders to the Yasakuni Shrine honoring the war dead have only continued to stoke old wounds. Chinese media and popular culture regularly fan the flames of distrust, with China’s film industry producing as many as 200 war-themed TV dramas and movies about Japanese treachery each year.

Those negative perceptions have hardened over the years, making the positive developments in recent weeks even more impressive. The latest Pew Global Attitudes Survey released in September 2019 found that a record high of 85 percent of Japanese had unfavorable views of China, with only 14 percent expressing a positive view.

It is hard to imagine that such deep-rooted hostility could so quickly be reversed. Japan’s response to the coronavirus outbreak, however, was only the latest in a series of events pointing toward improved relations between Japan and China. In a sense, the positive sentiments surrounding Japan’s coronavirus response are the result of concurrent trajectories of both increasing collaboration between China and Japan and frustration below the surface between Tokyo and Washington.

Since 2010, when China overtook Japan as the world’s second largest economy, Japan has viewed China with increasing suspicion in the economic realm. However, the U.S.-China trade war, beginning in 2018, has served as a powerful motivator—especially for China—to minimize economic tensions between the second and third largest economies in the world. At the same time, Prime Minster Shinzō Abe has faced difficulty in handling the U.S.-Japan relationship, which he has sought to manage in part by engaging in a continuous charm offensive on President Trump. Abe successfully partnered with the Trump administration to garner support for major policy proposals like the 2019 U.S.-Japan Trade Deal, the Indo-Pacific strategy, and the Blue Dot network. Yet to Japan’s dismay, while there is no open friction between both leaders, there is a deep disquiet in Tokyo about an ever-unpredictable President Trump, who has also threated America’s most important strategic alliance in the Pacific by expressing a distressingly cavalier understanding of the U.S.-Japanese military alliance, threatening high tariffs on Japanese industry, and disagreeing with Japan over the legality of North Korean missile launches.

On the other hand, President Xi Jinping and Prime Minster Shinzō Abe have developed an increasingly strong personal relationship. Both leaders are looking to sign a new joint document on the future of bilateral relations, now postponed because of coronavirus along with President Xi’s state visit to Japan in April, which would have been the first since that of Hu Jintao in 2008. Meanwhile, China has remained a steadfast supporter of its Asian neighbor holding the 2020 Tokyo Summer Olympics as scheduled, particularly given Beijing’s common goal of hosting its own Olympics in Winter 2022.

Another calming factor in the China-Japan relationship has been the surge in people-to-people exchanges. The number of Japanese students studying in China has been steadily rising. From 2016 to 2018, Japanese students studying in China increased 5 percent from 13,595 to 14,230. The number of Chinese students studying in Japan has increased 22 percent over the last four years from 94,111 to 114,950. Chinese tourism in Japan has also been on the rise over the past decade, jumping 14.5 percent between 2018 and 2019. Between 2013 and 2019, the number of Chinese tourists in Japan has increased by a staggering 630 percent, from 1.3 million to 9.6 million. As of October 2019, the number of monthly flights between China and Japan reached 2,200, increasing 23 percent over the prior year. Notably, flights from China make up a quarter of all international flights in Japan. Of course, given that Japan has increased travel restrictions on Chinese visitors because of coronavirus, these numbers will certainly fall this year.

Despite the many factors pointing toward a thaw in the China-Japan relationship, it is impossible to say whether that thaw will be short-lived or instead be the first sign of a sustainable alteration in the political, economic and strategic landscape in the Pacific. Certainly, given the engrained nature of bilateral tensions—from frictions over disputed islands, guarded views of the Chinese public, the fate of the Olympics, and newly implemented travel restrictions on Chinese visitors to Japan—tensions will not disappear overnight, and any major flashpoint could negate the goodwill gained from “mask diplomacy.”

But if nothing else, the coronavirus has done what few observers thought possible: quell generations of China-Japan antagonism. And for the immediate future, both countries are now bound together in the same public health crisis—the full political and economic implications of which are yet unknown—and neither side would gain from halting the mutually-beneficial collaboration now.

It is often said that a crisis is a terrible thing to waste, and it is clear that—whereas the United States has forsaken its global leadership role during the coronavirus crisis—Japan has pounced on the opportunity to use “mask diplomacy” to alter geopolitical dynamics to its advantage. The lesson that Japan has remembered from the 20th century—and American leaders have seemed less motivated to recall—is that countries that emanate a belief in common humanity and invest in building relationships throughout global catastrophes often have the greatest say in the world order that follows. Arguably, “mask diplomacy” has taught us an even more powerful lesson for the 21st century: if a relationship between two countries as seemingly intransigent as that of China and Japan can improve so rapidly, so too can many other relationships that have succumbed to deep-seated hostility around the world.

COVID-19China-Japan Relations
printTweet
You might also like
Back to Top
CHINA US Focus 2023 China-United States Exchange Foundation. All rights reserved.