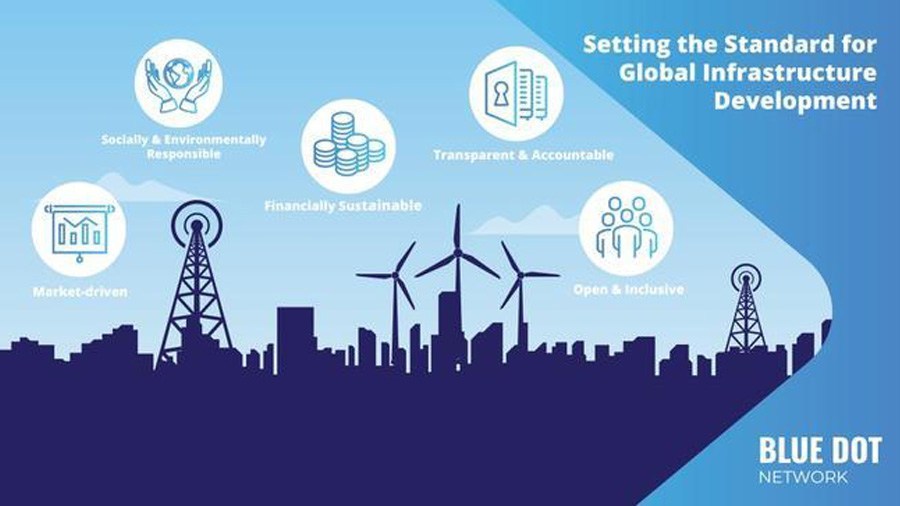 Ever since Chinese President Xi Jinping announced China’s Silk Road Economic Belt initiative, now called the Belt Road Initiative (BRI), during a trip to Kazakhstan in 2013, the US has sought, in one way or another, to thwart, obstruct, or counter this initiative.

The latest of these efforts comes in the form of the Blue Dot Network (BDN).  Unveiled by the US Overseas Private Investment Corporation (OPIC), Australia’s Department of Foreign Affairs and Trade (DFAT), and Japan Bank for International Cooperation (JBIC) at the 35th Association of Southeast Asian Nations (ASEAN) Summit in Thailand On November 4th, BDN serves as a multi-stakeholder initiative that will harness governments, private sector, and civil society to “promote high-quality, trusted standards for global infrastructure development in an open and inclusive framework.”

At its announcement, Keith Krach, the Department of State Under Secretary for Economic Growth, Energy, and the Environment claimed that “This endorsement of Blue Dot Network not only creates a solid foundation for infrastructure global trust standards but reinforces the need for the establishment of umbrella global trust standards in other sectors, including digital, mining, financial services, and research,”

This claim raises a number of questions.  As Peter McCawley of the Lowy Institute has argued, an agreement reached by three countries can hardly be considered “global.” Nor, one would argue, can they be considered a “standard.”

Krach goes on to claim that “Such global trust standards, which are based on respect for transparency and accountability, sovereignty of property and resources, local labor and human rights, rule of law, the environment, and sound governance practices in procurement and financing, have been driven not just by private sector companies and civil society but also by governments around the world.”

At the Summit, Robert O’Brien, a White House National Security Advisor, asserted that the Initiative was designed to counter projects that were not considered to be “high quality”, an allusion to US platitudes, and Western nations in general, that China was luring BRI nations into debt traps. These pronouncements would suggest that the BDN has not only somewhat missed its target, but smacks a bit of paternalism.

First, there is some truth to these claims. Many of these countries along the BRI have some of the highest levels of corruption and the lowest levels of transparency in their public sector, according to Transparency International’s Corruption Perception Index (CPI). Among China’s western neighbors through which the BRI runs, countries such as Kazakhstan, Uzbekistan, Turkmenistan, Kyrgyzstan, and Tajikistan, as well as most of the countries on the African continent, all rank among the worst in the world. As to risk, all have some level, or a significant level of debt risk, both operational and economic. According to Moody’s Investors Service, only 25% of the 130 countries that have signed BRI cooperation agreements have an investment grade rating. “forty-three percent have junk bond status, while a further 32% are unrated.”

In addition, it should be remembered that it is virtually impossible to achieve a high degree of precision on the level of China’s loans overseas to the developing world. China generally funds BRI projects through its policy banks such as the China Development Bank and Export-Import Bank of China via China’s State Owned Enterprises (SOEs). And neither the banks nor the recipients themselves share the rates at which these loans are made. The Paris Club, which tracks sovereign bilateral borrowing, would normally track these transactions.  However, since China is not a member of the Paris Club, it “has not been subject to the standard disclosure requirements.” Therefore, China does not provide its direct lending activities related to BRI. A National Bureau of Economic Research analysis suggests that nearly half of China’s loans to the developing world are hidden.

Nonetheless, the BDN misses the mark on a number of counts. First, Sri Lanka, in fact, remains the only nation to date that has undergone asset seizure. Analyses from the Rhodium Group, David Dollar of the Brookings Institution, and the Lowy Institute, all indicate that most of the BRI nations do have varying levels of debt burdens, some significantly. However, the debt remains manageable for the most part. And the debt vulnerability involved depends in part on how much increasing investments correlate with economic growth and productivity.  Further, these analyses indicate that China’s lending practices do not follow any specific pattern in the recipients’ debt profiles or levels of governance. China has lent to both authoritarian governments as well democratic ones, and with varying degrees of debt. More interesting is the fact that Beijing will sometimes write off debts without a formal renegotiation process. Instead, it “usually unilaterally agrees to cancel part of a borrowing country’s debt, even when there are few signs of financial stress on the part of the borrower.” These cases of debt forgiveness likely suggest that the debt itself is less important than the objective of improving bilateral relations. This points to where BDN misses the mark on a second count.

While the BDN focuses on “global trust standards” and “high quality” loans, the BRI is not one monolithic infrastructure agenda. Rather, it is “a blend of economic, political, and strategic agendas that play out differently in different countries, which is illustrated by China’s approach to resolving debt, accepting payment in cash, commodities, or the lease of assets.”  The strategic objectives are especially apparent where access to key ports and waterways are aligned with Beijing’s investment.

Finally, the continuing debt trap narrative appears to be driving the idea that developing nations do not have the financial nor technocratic savvy to avoid a debt trap, which has not been the case. Some countries have now learned from the Sri Lanka experience and have recognized that the costs far outweigh the benefits. Bangladesh, for instance, has declined Chinese funding for the much needed “20km-long rail and road bridges over Padma river” and has instead opted for “self-generated funds.” Citing China’s “unfair” infrastructure deals by his predecessor, Malaysia’s Prime Minister Mahathir Mohamad cancelled two projects; the East Coast Rail Link, which would have connected Port Klang on the Straits of Malacca with the city of Kota Bharu, and a natural gas pipeline in Sabah. While the Sabah pipeline project remains cancelled, the East Coast Rail Link restarted again only after China agreed to cut the price by nearly $11 billion. Thailand is also working to create a regional infrastructure fund via the Ayeyawady-Chao Phraya-Mekong Economic Cooperation Strategy (ACMECS) to reduce reliance on China. And while not technically a developing nation, Jamaica has recently decided not to negotiate any new loans from China, citing its commitment to reducing its debt.

It’s hard to know whether the US misinterpreted Chinese BRI intentions, or simply went into the BDN strategy with their eyes wide shut.  Either way, Homi Kharas of the Brookings Institution remarked that while China did recognize a significant infrastructure gap along its periphery, there has never been any secret about the profit motives for the BRI.

It is certainly true that the developing world needs infrastructure development. But beyond the Platonic high-mindedness of these ideals, it is not at all clear what better alternative the  developing world can expect from BDN since it will have no lending function of its own. BRI came in to fill the void because international financial institutions (IFI) have largely shifted away from hard infrastructure development. The US and the West can excoriate China all it wants on China’s debt traps, lack of transparency, and pernicious diplomacy.  But unless the US and the west come up with better solutions, that dirt road, for the developing world, is still a dirt road.

U.S.-China RivalryBelt and Road
printTweet
You might also like
Back to Top
CHINA US Focus 2023 China-United States Exchange Foundation. All rights reserved.