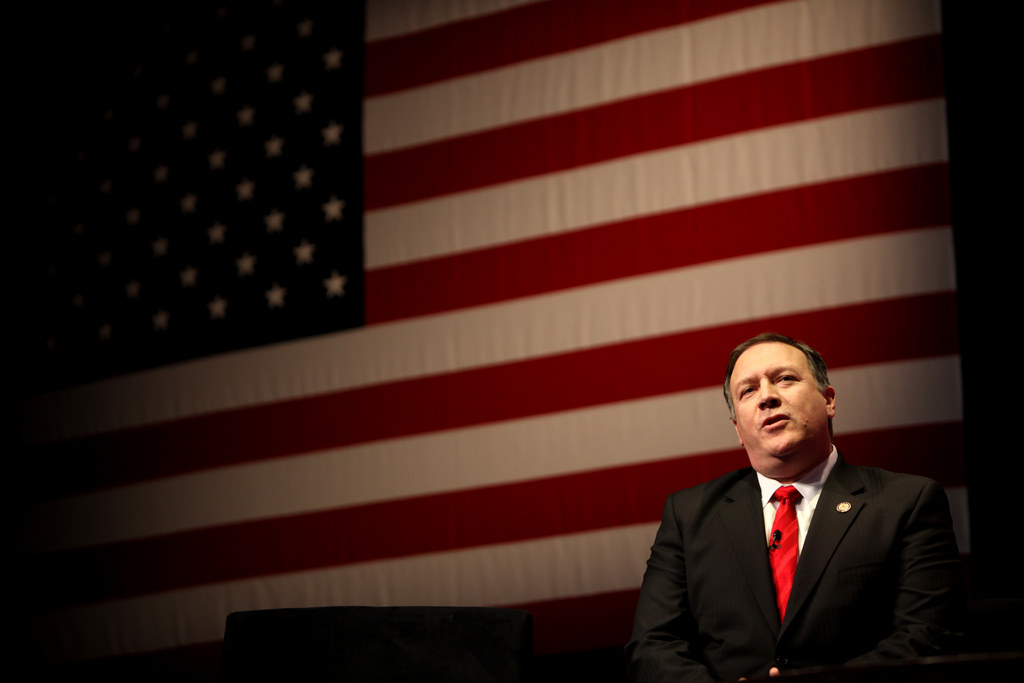 Mike Pompeo, President Trump’s likely nominee to be the next Secretary of State, made his money running an oil-services company in Kansas that was built around selling and servicing equipment from SJ Petro, a Chinese company with ties to the government. When he ran for Congress, one of the most effective attacks leveled against him was that his business model took jobs away from Kansas firms competing against the low-cost Chinese supplier.

Despite this background Pompeo should be seen as a signal that the administration of President Trump is about to paint China as the new public enemy number one. On Thursday, President Trump signed a memorandum that could impose tariffs on up to $60 billion worth of imports from China. The president’s call for stiff tariffs may be moderated in the end, but significant tariffs will probably happen, if for no other reason than they make great political sense. Trump’s core voters are what Emily Ekins of CATO has called “American Preservationists.” As a group they are less educated, more likely to work in blue-collar jobs, heavily tied to their identity as Christians, and deeply anti-globalization. Whether true or not, this group believes that foreign influence in all forms is a key factor in the decline of America and hence the need to “Make America Great Again.” Assuming any trade war doesn’t tank the economy until after the 2018 midterms, there’s little downside politically to pursuing the forthcoming tar and feathering of all things China. (Full disclosure, I was raised in Western Kansas in a farming family. I was steeped in the ideas Ekins outlines in her work. They are real, and they are widespread in these communities.)

Pompeo is thus a curious choice to carry this message. As a candidate for Congress in Kansas, he staunchly defended his company’s connection to China as helping him to make jobs for Americans. Koch Industries, headquartered in Pompeo’s home district, was by far the chief patron of his political career. Koch is the second-largest private corporation in the U.S., with a capitalization the size of Amazon. Their operations in the oil and gas business, plastics, fiber and more make them a major beneficiary of globalization, including and especially, lower trade barriers. And yet, Pompeo can be reliably counted on to twist and pivot out of this background as a man-on-the-make in the global economy.

First, Pompeo has shown himself to be loyal to Trump above all else. Whether he believes the Potemkin village view of China that the President peddles to his core is irrelevant. Rationalizations are always possible, and indeed the Secretary-designate has already equated Beijing with Russia as a threat to the United States. While it’s true that China engages in intellectual and other espionage on a massive scale, the point here is that Pompeo is shaping the political battlefield at home to try and shift the focus away from Russia to China.

The $60 billion in tariffs have just been announced. The fact that the White House claim that China is responsible for 60,000 factory closures and six million lost jobs is not supported by any serious economist doesn’t matter. The narrative is what his voters believe to be true, and the storyline of a Secretary Pompeo carrying tough words to Beijing will only help shift attention from Russia to the new bogeyman-designate. Pompeo is an excellent messenger for the president. He’s got the bona fides of having worked with China (even if it was as someone making use of Chinese practices and not opposing them), his perch at CIA gives him claim to knowledge about intellectual property theft and the threat of technology transfer, and maybe most importantly to Trump’s backers, he hails from “real” America, which gives him an automatic bump in authenticity over rivals from the overeducated (as my grandma used to say) coastal elites.

This will work for his base even if it won’t dissuade many others. China, because of its immense economic impact on the U.S., is a presence felt in the communities where Trump voters live. From cheap goods at Walmart which have killed off local stores and left main streets barren on Friday nights, to perceptions that the local factory closed because Obama gave away jobs, China makes a much better political foil.

Second, whatever his real merits (and one doesn’t get a law degree from Harvard without some) Pompeo made his name on the national stage as the most vocal proponent of conspiracy theories about the death of Americans at the consulate in Benghazi, Libya. Even as the official report of the Republican-led committee found no wrong-doing, Pompeo co-authored what was essentially a dissent to the final report that charged that “Secretary Clinton failed to lead,” accusing her of negligence in the deaths of four Americans. This was utter nonsense, but it was brilliant politics. When Donald Trump shot to the top of the Republican ticket in 2016, Pompeo was an early and vocal backer. His record with the Benghazi investigation, which was the number one charge against Clinton in the minds of the “lock her up” crowd, established his ideological purity for Trump, which made him a perfect candidate for the top job at the CIA.

But State is different. Five of the first ten presidents entered the White House after serving as the Secretary of State. The idea that State is the most prestigious, most powerful cabinet-level position is a vestige of this tradition. It assumes, as was true in the founding period, that the Secretary of State is the country’s chief architect of foreign policy, negotiating military alliances, setting trade pacts, and acting as the chief intelligence agency for the young Republic. Anyone who successfully mastered those tasks was seen as having the best preparation for taking over as chief executive. After all, if you could make foreign policy as the Secretary of State, that was half or more of the job of President.

That hasn’t been the case for over a century. Normally I’d argue that the role awaiting Mike Pompeo is not as a maker of policy, but as a representative of policy as made in the White House. But Pompeo is likely to get a bigger part in drafting policy than most recent secretaries, certainly more than his predecessor. The attack-dog posture that made Pompeo a good fit for a CIA Trump didn’t trust clashes with the traditional norms of what a Secretary of State is supposed to be: careful in speech, long-range in thinking, conservative in action. Pompeo is none of those. But that’s exactly why the president is likely to let him run the show on tariffs and more. He’s proven his fealty with the same kind of perplexing mix of extreme views on Islam, Russia, and China that his boss has. Foreign leaders will struggle with these paradoxes for sure. But they’d be well advised to keep in mind Pompeo’s beginnings as a member of the global elite, just like Trump. If they can make their positions palatable to enough of Trump’s supporters, he’s likely to revert to his instinctual support of international trade. And he’ll have Pompeo at his side writing the rationalization.

Of course, it’s hard to imagine an easy way to justify such policies to a base so reflexively opposed and so closed to any counter-argument. Pompeo’s impact on this scenario is great, too. Relations between Beijing and Washington are already at a low point. The next few years will accelerate the trajectory toward a major rift between the two great powers unless cooler heads prevail, on both sides. A trade war now will not lead to a hot war now. But it could very well set the stage for one in decade or two, after Pompeo and Trump have exited the stage. Such a conflict would be so terrible that its mere possibility should be an ever-present thought in the minds of policymakers today.

As Director of the CIA, Pompeo should know more than most what such a thing would look like. The question is whether his ambition will make him a catalyzing influence on Trump, or whether what he knows from that job and his time in the oil business with China will lead him to moderate his boss and turn away from the conspiracy theories of his early career.

I have my doubts.