Putting the Order(s) Shift in Perspective

— “Doubling Down? China and International Order(s)”

As the Chinese year of Monkey has just arrived, I want to first of all wish all of you a happy New Year. 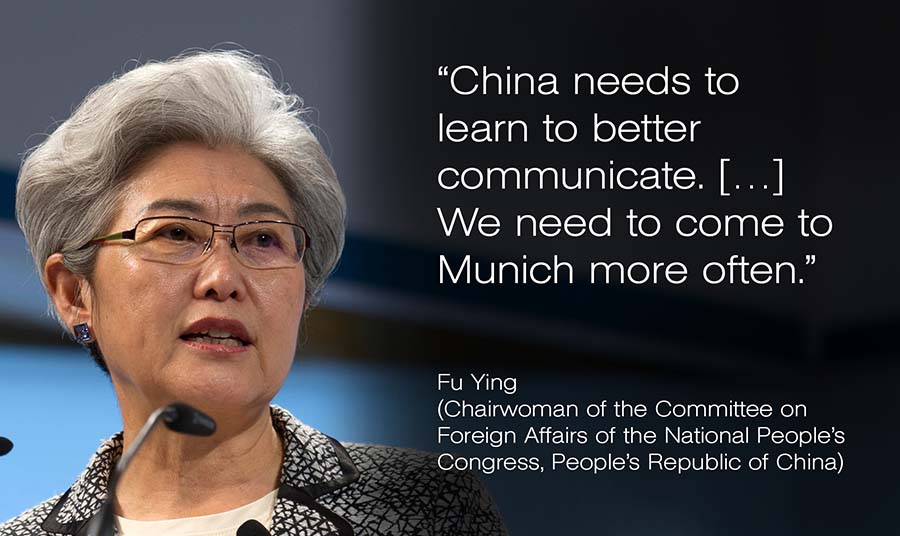 China has been asked frequently: are you challenging the US as leader of the world order? Or, are you making a parallel order?

The answer is: of course not, we are part of the international order.

We seem to be talking past each other. So, are we talking about the same order?

“The US-led world order,” if I understand it correctly, rests on three pillars: first, the American value system, which is also accepted as the western values; second, the U.S. military alignment system, which is claimed to be the security foundation for US leadership; third, the international institutions including the UN system. Maybe I am simplifying, but many other elements can fall into these categories.

This world order structure has its roots in the history of international politics and also has its modern contributions. The United States has been reaping huge benefits from its leadership role.

However, with globalization going deep and international politics fragmenting, this world order is being overstretched in providing new and effective solutions to contemporary challenges. For example, we have seen that the global promotion of the western values is not always successful, especially in countries where new governing structures failed to grow fast enough to replace the original ones that were being brought down. Chaos can occur and even spill over.

In the defense field, the U.S. led military alliance puts security interests of its members above those of non-members and therefore has often led to more complex situation, especially when it comes to regional disputes. Moreover, the 2008 global financial crisis betrayed flaws in the international governance and the newly born G20 took on the reform of global governance system.

Against such background, China has grown in size economically and is consequently having greater weight on the world stage; it’s quite natural that people want to know where China stands.

You may listen carefully voices from China. Chinese leaders have insisted that China supports the current international order. And you may take note that the word used is “international order.” The Chinese seldom talk about the “world order.” What China refers to is the UN based system including the international institutions and norms. China has a strong sense of belonging to this order, as China is one of its founders and is a beneficiary, a contributor, as well as part of its reform efforts.

The Chinese President Xi Jinping in his speech in Seattle last September argued that “many developing countries want to see a more just and equitable international system. But it doesn’t mean that they want to unravel the entire system or start all over again.” What they want is “to reform and improve the system to keep up with the times.”

China has proposed mechanisms where the existing international order falls short. The Silk Road “Belt and Road” initiative and the AIIB (Asian Infrastructure Investment Bank) are new public goods that China is offering. These mechanisms are non-exclusive and guided by the UN principles.

China and the US have growing common interests in world affairs. For example, both support the role of the United Nations, and both need the other’s cooperation in addressing global challenges. The China-US bilateral agreement played a key role for the success of the UN climate conference in Paris.

Having said that, I hope you now understand why China cannot support the U.S.-led “world order” in its entirety. As you are aware, China has deep concern over the long-held rejection and pressure by the US and other Western countries on China’s political system. On the security front, we stand for common security and do not want to see the world divided again by exclusive military blocs.
The question is: where do we go from here?

China is not going to be the last developing country ascending to the world’s center stage. Many more countries would want a fair stand alongside China.

Changes are needed. If we cannot remake each other in our own images, can we not work together to build a more inclusive order framework, a common roof, so to speak, to accommodate as much as possible the diverse interests, needs and ideas? Naturally this will take time.

The Munich Security Report 2016 saw the strategic outlook bleak. It also mentioned that China and the US will find it increasingly difficult to manage their differences. Indeed, if one only listens to some of the US election rhetoric, one may fear that the two countries will fall into the Thucydides Trap with their eyes wide open.

But, in the real world, both the Chinese and American leaders openly indicated that they are determined to make the relationship work to avoid repeating the history of conflict between rising countries and established powers.

For that purpose, the Chinese President Xi Jinping proposed to build a New Model of Major-Country Relationship featuring no-conflict, no-confrontation, mutual respect and win-win cooperation. Though this may not sound very ambitious, putting it into practice looks not easy. But hopefully, this process will help foster a new model towards an overarching global order.

China’s commitment to peaceful development remains on course. We don’t want to be distracted, and still less do we wish to see the external environment that enables China’s peaceful rise reversed. But, if threatened or confronting tougher situations, China now has more leverages and means at disposal.

The Chinese are a calm and patient people. The priority is to do our own things well, meaning to promote economic growth and prosperity for the people. As our capability improves, we will be able to do more for the region and the world. In the meantime, China needs to learn and also to better communicate with the world. (End)