Sanctions on China’s Military Are Needless and Provocative 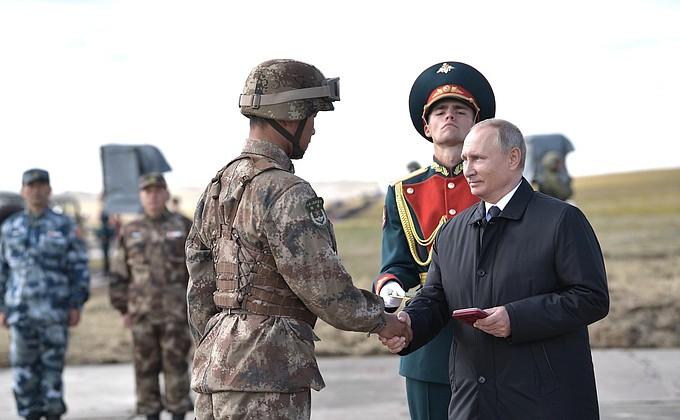 Relations between Washington and Beijing have been growing increasingly contentious on multiple fronts over the past two years. The assertive U.S. naval presence in the South China Sea, signs that both the Trump administration and the U.S. Congress are boosting their support for Taiwan as Beijing hardens its policy toward the island, and the burgeoning bilateral trade dispute (now verging on a full blown trade war) have all contributed to the animosity.

Washington has now made matters considerably worse by imposing sanctions on China’s Equipment Development Department (EDD), the military branch responsible for weapons and equipment, and on its director, Li Shangfu. U.S. State Department officials cited China’s purchase of fighter jets and missile systems from Russia, in breach of a sweeping U.S. sanctions law punishing Moscow for allegedly meddling in the 2016 U.S. election. The action blocks the EDD, and Li, from applying for export licenses and participating in the U.S. financial system. It also adds them to the Treasury Department’s list of specially designated individuals with whom Americans are barred from doing business.

Unsurprisingly, China’s government regards the latest measure as an extremely unfriendly act. The foreign ministry promptly issued a scorching statement condemning and protesting the sanctions and warning of “consequences.” Deputy Foreign Minister Zheng Zeguang summoned the U.S. ambassador to deliver the message of displeasure in person.

The “consequences” were not long in coming. China abruptly announced its withdrawal from scheduled talks to improve bilateral military communication. Huang Xueping, deputy head of the Central Military Commission's Office for International Military Cooperation, called the U.S. sanctions "unreasonable," a "blatant violation of basic norms of international relations," and "a stark show of hegemony" that will severely damage Sino-U.S. military relations as well as overall bilateral ties. Rear-Admiral Yang Yi, a professor at the PLA National Defense University, said the U.S. sanctions would have little effect on China's actual military procurement process. However, he noted, "It is very damaging to Sino-U.S. military relations because the sanctions are blatant and malicious attempts by the U.S. to sabotage the modernization process" of the People's Liberation Army.

The State Department’s efforts to placate Beijing proved clumsy and utterly ineffectual, coming across as disingenuous and probably making the situation even worse. The centerpiece of Washington’s attempt at diplomatic damage control was a conference call featuring an administration official, who briefed reporters on condition of anonymity. The official insisted that the sanctions imposed on the EDD were aimed at Moscow, not Beijing or its military, despite the existence of an escalating trade war between the United States and China. “The ultimate target of these sanctions is Russia,” the official stressed. They were aimed “at imposing costs upon Russia in response to its malign activities.”

Washington’s latest action reflects an unhealthy U.S. fondness for sanctions as a policy tool, an insensitivity to the interests of third parties that may become collateral damage and overall diplomatic incompetence. They threaten to inflict significant damage on Washington’s crucial relationship with China while gaining few, if any, offsetting benefits.

The U.S. obsession with sanctions goes back decades, despite a dismal record of positive results. Trying to isolate countries as diverse as Vietnam, Syria, Cuba, Iran, North Korea, and Russia has proven largely futile. Yes, such measures can and do make life miserable for ordinary people in the target countries, but they rarely compel the regimes to capitulate on key policies. American experts in both foreign policy and international economics have documented the ineffectiveness of most sanctions campaigns. University of Chicago Professor of Political Science Robert Pape concludes that the success rate may be a meager 5%. A comprehensive historical study conducted by Dr. Gary Hufbauer, a senior fellow at the Peterson Institute for International Economics, and his co-authors during the latter stages of the Cold War found a slightly higher, but still extremely weak, success rate.

Washington’s application of sanctions on governments and commercial firms in other countries that do business with a target regime is leading to rising anger even among U.S. allies. That side effect is becoming especially apparent with the negative reaction of European governments to the Trump administration’s imposition of new unilateral sanctions against Iran in an attempt to force Tehran to modify the Joint Comprehensive Plan of Action that Iran already accepted in 2015 to contain its nuclear program. A major European grievance is the concern that their business firms will be victimized by the sanctions.

Washington’s imposition of sanctions on China is equally ill-advised. The U.S. quarrel with Russia already has gotten out of hand and is creating major problems in that bilateral relationship. Dragging China into that needless spat will poison another relationship with an even more important country. That prospect is sheer folly and a case of foreign policy malpractice.

Chinese MilitaryChina-Russia Relations
printTweet
You might also like
Back to Top
CHINA US Focus 2022 China-United States Exchange Foundation. All rights reserved.